Another Illinois State-Record Walleye Caught on the Pecatonica River

The fight lasted less than half a minute, but the fish at the end of the line turned out to... 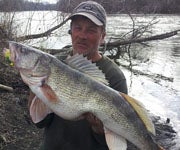 The fight lasted less than half a minute, but the fish at the end of the line turned out to be the new Illinois state-record walleye.

Angler Jim Zimmerman of Beloit, WI was fishing on the Pecatonica River, about 20 miles south of the state line, when he caught this 15.08-pound walleye, according to the Associated Press.

”When it came up, I knew it was big one,” Zimmerman told the Chicago Sun-Times. ”But it wasn’t a vicious hit, just a normal hit. Set the hook. It was over in 25 seconds.”

Zimmerman was pitching a 1/8-ounce Northland fireball jig with a 3-inch Berkley Power Grub and a minnow when he caught the fish__. He was fishing with his friend Larry Stangl. The two weighed the fish with a hand-held scale–it weighed 15.5 pounds–and continued to fish for another two and a half hours before they headed to Blackhawk Meats in South Beloit, Ill. for an official weigh-in.

Two conservation police officers were present as witnesses. Dan Sallee, a regional fisheries biologist, verified the 31.5-inch long walleye, with a girth of 20-3/8 inches, according to the Chicago Sun-Times. The paperwork was submitted Monday afternoon.

The previous state-record walleye was also caught on the Pecatonica River just two months ago. That fish weighed 14 pounds, 12 ounces and was taken by Nick Tassoni, 15, on Jan. 7.