Australian Teenager Bitten by Deadliest Snake in the World, Survives

A 17-year-old Australian boy has baffled scientists by surviving a bite from an inland taipan, a snake widely considered to... 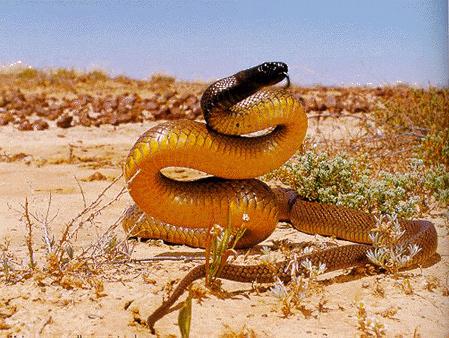 A 17-year-old Australian boy has baffled scientists by surviving a bite from an inland taipan, a snake widely considered to be the most dangerous in the world.

(See our gallery of the Deadliest Snakes in the World)

The story begins with a mystery as the unidentified boy was bit in the town of Hunter Valley, some 600 miles outside the snake’s natural habitat. This and the fact that the boy was able to collect the snake and bring it with him to the hospital have led police to wonder if the snake was being kept as an illegal pet.

The inland taipan, also known as a fierce snake, due to the fact that a single drop of its venom has the power to kill more than 100 adult men (or 25,000 mice), bit the young man on the left hand. The teenager drove himself to the hospital where he was given antivenin then transferred to another hospital. The mere fact that boy survived is amazing. Usually when people are bitten by an inland taipan, they are dead in less than an hour. Australian Reptile Park head keeper of reptiles and spiders, Julie Mendezona, told the Daily Mail: “Effectively what it [the venom] will do is start shutting down the function of messages going to your brain, to your vital organs, your lungs, your heart and even your muscles” Mendezona said. “‘It can kill someone within maybe 45 minutes and there have even been reports of people experiencing effects of the venom within half an hour.”

Police are waiting for the boy to recover so he can detail how exactly the snake bit him.