I could make this a column about Sandy’s unforgiving destruction and disrepair in New Jersey, but there’s a better angle... 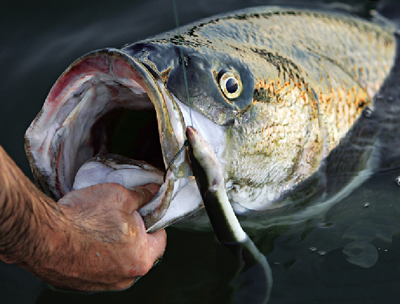 I could make this a column about Sandy’s unforgiving destruction and disrepair in New Jersey, but there’s a better angle – You can’t keep Jersey down. After weathering the most destructive storm system in recorded history, Jersey’s recreational fishing industry got a solid low blow, but not a knock out punch. Tsunami-like surges, battering waves and uncontrolled fires gave the whole Jersey Shore playground unwanted cosmetic surgery from tip to tip of the state.

An Incredible amount of sand was pulled out into the ocean creating sandbars along the coast that now resemble the far out shoals of North Carolina. Jetties, rockpiles, shipwrecks, old cars, and concrete rubble structures that have been submerged or buried for more than a century are now exposed. Three new flowing inlets pierced the barrier islands, but to date have been bulkheaded off and filled in. Iconic landmarks like the roller coaster at Seaside Heights collapsed and now sits in 20 feet of water as a twisted hulking fallen solider. Legendary boardwalks from Point Pleasant down to Atlantic City now exhibit plankless pilings, and beach access along the central part of the shore from Manasquan to Island Beach State Park, a 30 mile plus stretch of beach, remains in quarantine, patrolled day and night by fatigue-wearing National Guard troops to prevent looting and keeping people away from dangerous debris structure. Sounds crappy right? But through all the mess, saltwater anglers have broken through and have found a way to take full advantage of the striper run.

“Once you get past the floating rooftops, cars, and other lumber, the fish are there,” said Ed Bronstein of Fin-Atics, Ocean City. “The only thing hampering people’s ability to fish is finding a place to launch the boat, if they still have one, as many marinas decided to close up shop for the winter instead of repairing the docks now. But, there are still launch points that are up and running.” Bronstein states that the Great Egg Inlet has been a hot spot to chunk bunker for stripers up to 30 pounds.

Surf fishing access has been limited, with lines of bulldozers razing crippled houses and towering quarry-style front end loaders clearing away the debris, but access can be found now in surf spots like Asbury Park, Sea Girt, Brigantine, Wildwood and Cape May, and the bass bite is on.

“The Brigantine surf has been producing stripers consistently,” according to Andy Grossman, Riptide Bait and Tackle, Brigantine. “The north end and the hotel area both held bass this week. The further north you went, the easier it was to hold bottom, where the middle of the island seems to have a lot of current needing 5 to 6 ounces to hold.” Bass weighed in last week from the surf went from 8 to 31 pounds.

Tackle shops in the middle of the state got hit the hardest and shops like Grumpy’s in Seaside Park didn’t get flooded out, but lack of infrastructure for power, electric or gas to the island will most likely delay an opening until spring. Alex’s Bait and Tackle on the Manasquan Inlet was less fortunate as the inlet entered his store, soaking all the merchandise, and may take until Memorial Day or longer to get back in the game. However, many northern and southern area tackle shops fared well with minimal damage and most fishing reports tell of activity is taking place.

“Big cow bass are choking Delaware Bay, where trophy sized bass, up to 53 pounds so far, are a daily catch,” said Matt Slobodjian, Jim’s Bait and Tackle, Cape May. “Hot D-Bay spots were the C&B area, the inside edge of the 60 Foot Slough, the shoals just inside Brandywine light, and the top of the 20-foot Slough. Fish were caught by many different methods including chunking, trolling plugs, eels, spot, and bucktailing.” Quality fish included Bill Lewis of Bryn Mawr PA who weighed in a 43.5-pound cow, though Kyle Stillwagon of North Cape May slammed a linesider that topped the scales at a whopping 52.5 pounds!

Its step by step, day by day, process of recovery in Jersey, as the rubble piles get cleared and people begin to rebuild their livelihoods. Word on the street is that most of the tackle shops, marinas and party boats should all be operational by Memorial Day. If Sandy thought she could destroy the lives of Jersey’s tough residents, and dampen their passion for fishing, she’s got another thing coming.