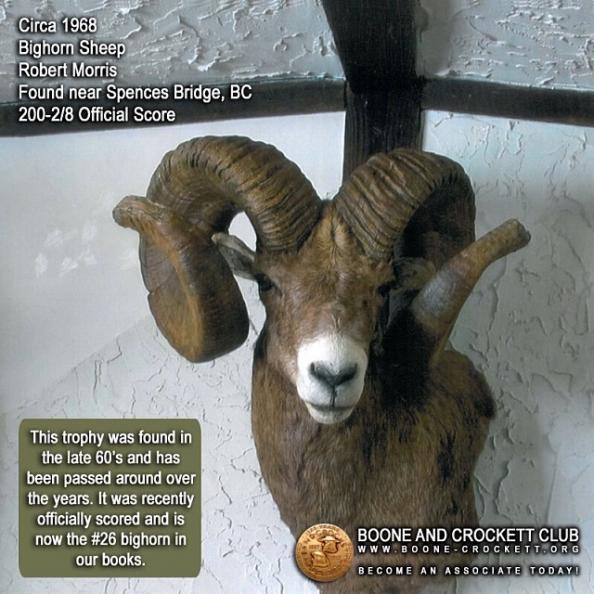 The Boone and Crockett Club’s Trophy Watch posted this photo of a huge bighorn sheep picked up in the late 1960s by a steelhead fisherman in Spences Bridge, British Columbia. During the past 45 years the bighorn skull reportedly changed owners multiple times and was only recently mounted and officially scored. The horns measure 200 2/8 inches, tying this bighorn with two others as the No. 26 largest bighorn in the B&C record books.

A letter from the trophy’s owner, Robert Morris, accompanied the post on B&C’s website. According to Morris, the fisherman who discovered the bighorn skull on the bank of the Thompson River kept it for about 20 years. In the late 1980s he gave the skull to a fellow fisherman. The second owner held on to the skull for a decade before passing it along to his buddy Morris.

“My friend knew that I hunted sheep and would like to hame the horns,” Morris wrote in the letter. “In the fall of 1999 there was a knock on my door and my friend gave the horns to me as he wasn’t interested in getting them mounted.”

Hoping to mount the skull himself, Morris spent the next several years searching for a suitable cape for the bighorn. He writes that he also had to verify his ownership of the trophy with the BC Fish and Wildlife Branch. Morris finally found an appropriate cape and the bighorn was mounted in 2012.