The Hill Gould buck remains one of the greatest non-typical whitetail bucks ever taken. The story behind the hunt is even more intriguing 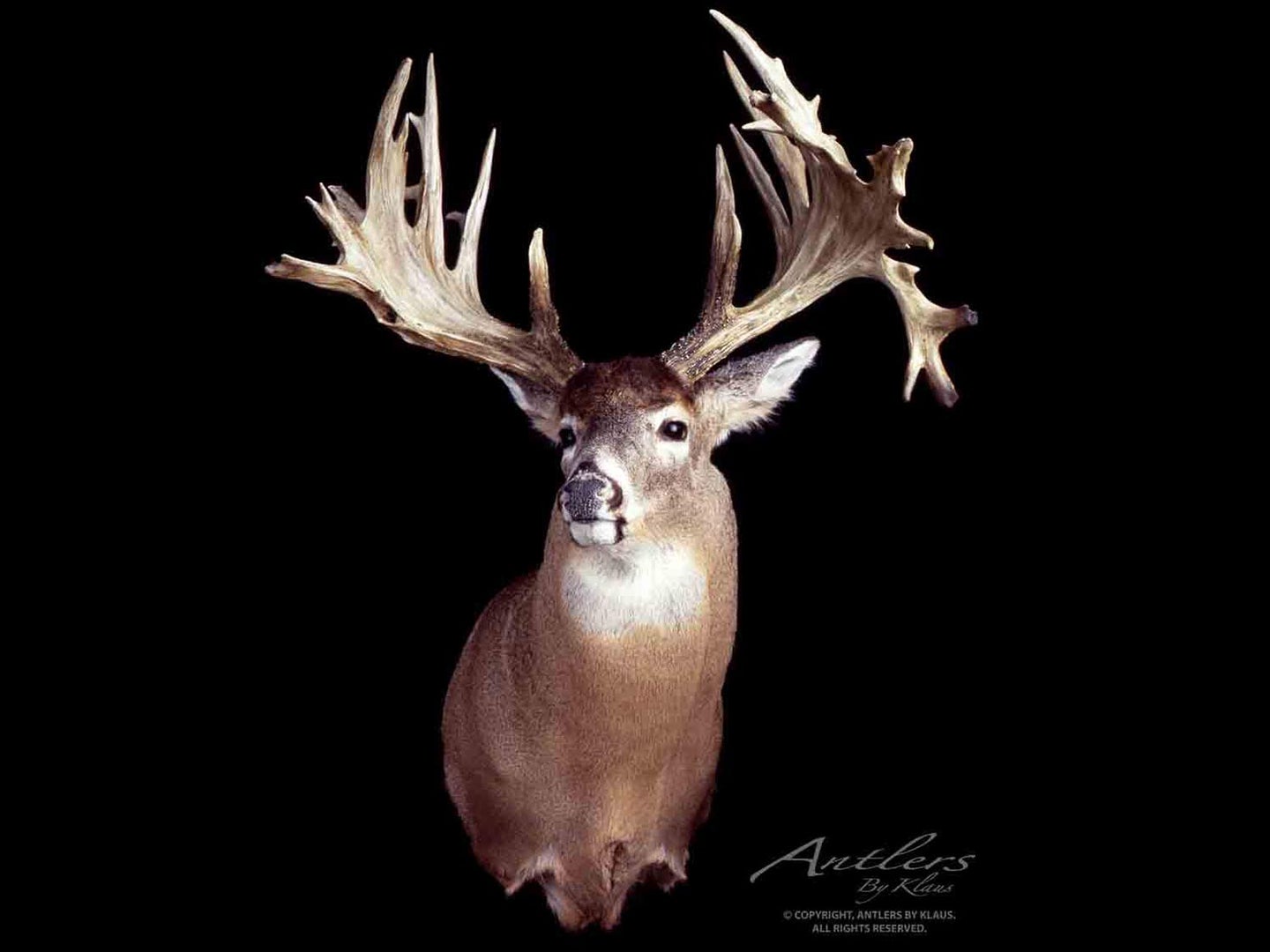 The Hill Gould buck was taken in 1911 and scored 259 inches by Boone & Crockett. Antlers by Klaus
SHARE

Louie Cataldo grew up in a family of hunters in the remote Grand Lake Stream area of northern Maine, where he would eventually become a registered guide, leading hunters in search of the region’s legendary big-woods whitetails. The bucks were celebrated in no small part due to a giant deer that his grandfather, Hill Gould, killed when he was a teen.

The year was 1910. Hill, his twin brother, Eldon and their friend, Leonard “Kizzie” Kennison, all in their late teens, headed to an old tar paper hunting shack they called the “Bear’s Den.” The blind—as it would be referred to today— was located along the Little River, which flows between West Grand and Big Lake. Gould himself was a guide.

“That’s what everybody did back then,” says Cataldo. “There weren’t a lot of other ways to make money so that’s what most folks around there did—still do.”

With no sports in camp, the boys took some time to hunt for themselves, each heading off in a different direction to stillhunt the big woods. Meat was the main goal back then and hunters were allowed two deer so any deer would do.

“Antlers weren’t a priority,” says Cataldo. “We would just cut them off and keep them in the barn, then give them away to the sports who came up from out of state.”

As the day wound down with no deer sightings, Gould decided to sit at a favorite spot where the river formed a set of rips.

“It’s maybe a foot or so deep there,” says Cataldo, who would later spend many a day in that same spot. “The rest of the river is deeper so the deer like to cross there rather than swim.”

It was right before dark when Gould heard something coming, crashing through the alders that grew thick along the river margin. The first thing he saw was the massive antlers, and his excitement waned when he surmised that it must have been a moose. Another, less ethical hunter might have seized the opportunity.

“It wasn’t uncommon in those days [to poach a moose],” says Cataldo, but Gould had a well-earned reputation for playing by the rules.

Read Next: How to Have a Better Deer Season: Learn From Your Mistakes (and Successes) This Season

Just the same, he continued watching the animal and when it finally cleared the dense brush, Gould realized it was a deer, and giant one at that. He wasted little time firing a single shot. Gould also had a reputation for his shooting ability. Cataldo recalled a story of how the Gould family was sitting around the dinner table one day when someone saw a buck crossing the back field. Hill grabbed his gun, ran outside and got off a snap shot just as the running deer jumped over fence. They all said he missed it but when they walked out back they found not only had he hit it, but the shot opened up the deer and all the guts had fallen out.

Gould was confident in his shot and also knew it was a big deer, but didn’t comprehend how big until he walked up on it. Then he realized he’d killed a true giant, with massive webbed antlers and a body bigger than he’d ever seen before. He also knew he wasn’t going to get it back by himself so he dressed the deer, skewered the heart and liver on a limb and hiked a mile back to camp.

It was well after dark when he arrived and the others were already seated around the table playing cards. When they asked how he’d made out Gould, in his characteristic laconic nature simply flung the heart and liver down on the table. Upon seeing the massive organs they all came to the same conclusion: the typically straight-and-narrow Gould had shot a moose out of season.

After Hill told his story, and finally convinced them it was indeed a deer, the boys were so excited they couldn’t wait until morning to see it, so they grabbed their lanterns and made the mile-long hike back to the deer. All were in awe. None had ever seen, nor even imagined such a buck, with massive palmated antlers and points sticking in every direction like the roots of an over-turned cedar. When the excitement and congratulations finally waned, they concluded that the best and maybe only way to get the deer out would be to bring a canoe down river and float it out the next day, which is what they did, after quartering the animal.

The buck caused quite a stir in town and eventually throughout the State. The Bangor Daily News ran a headline story proclaiming, “50 Point Buck is the Largest Ever Seen.” Cataldo recalled from family stories that they actually counted 52 points. “Back then they counted anything you could hang a wedding ring on as a point,” he says. Official scorers would later reduce that number to 30. It was already quite a story but the buck that had been elusive enough to grow such massive antlers would prove even more elusive after its death, disappearing for more than two decades.

There’s a saying in the north woods that, “You can’t eat antlers.” Maine hunters are often more impressed by body size, at least they were back then. Being a pragmatic Yankee, Gould took advantage of the opportunity when Frank Ball, who owned a nearby sporting camp, offered him $50 for the deer head.

“That was a lot of money back then,” says Cataldo. The mount remained there for several years until Ball sold it. “We heard it was in a club in Bangor for a while but then it disappeared.”

It would be more than 30 years before the Gould buck resurfaced. According to Cataldo it had been sitting in “…some woman’s barn. She had a fella cleaning out the barn and she didn’t want the deer head so she gave it to him.” It didn’t take long for word to get out, but not before the Gould buck vanished again. “We heard that some doctor in New Hampshire had it, but we weren’t really sure.”

The Gould buck resurfaced yet again in the early 1980s, somehow ending up in the hands of an official scorer for the Maine Antler & Skull Trophy Club (MASTC). Eventually, MASTC and Boone & Crockett scorer Jean Arsenault measured the buck at 259 net inches. Nearly three quarters of a century after it was shot, the Hill Gould buck finally took its rightful place as the Maine state record non-typical.

Gould’s buck is exceptional in several respects. According to Boone & Crockett scorer Ron Boucher, “The Gould buck has the greatest accumulation of circumference measurements of any deer, totaling over 70 inches, which means each circumference averages 8 7/8. To this day, the Hill Gould head is probably the most massive deer ever entered into B&C record books,” he said. The rack has 31 scoreable points and a net non-typical B&C score of 259-6/8. More than 100 years later it still ranks number one in the MASTC’s Nontypical category at 262 7/8, a record that’s unlikely to ever be surpassed.

While 200-inch deer do occasionally show up, they’re rare everywhere and rarer still in the north woods of Maine, where long, cold winters, deep snow and scarce food push deer to their limits. What resources they obtain go largely toward growth and survival, with little left-over luxuries like antlers. Perhaps it was the abundance of new growth from logging activity. Maybe it was exceptional genetics and the elusiveness to reach the age to realize them; more likely all of the above.

Soon after, Cataldo would get to see the legendary buck his grandfather killed.

“It just happened that I was at a banquet,” recalls Cataldo. “I went to enter a deer I’d shot and they had my grandfather’s deer there. It was quite a thrill to finally see it. They recognized me and took pictures of me holding it.”

The Gould buck subsequently changed hands again, eventually being acquired by Bass Pro Shops, where it was remounted and spent several years in King of Bucks collection. More recently it was purchased by a private collector and now resides in his home.

“Hill was a lucky guy,” says Cataldo of his grandfather. “He was born with a caul, [a piece of membrane that can cover a newborn’s head and face] a sign of good luck. That certainly seemed true on that October day in 1910. Gould later married the daughter of a wealthy sport whom he had guided. “He never had to worry about money after that,” said Cataldo.

The flames of Cataldo’s passion for the outdoors were fanned at an early age by tales of his elders. He recalled that his, grandfather was not a particularly talkative guy, but the wide-eyed youngster would beg Gould to tell deer hunting stories over and over, and the one he loved the most was about his big buck.