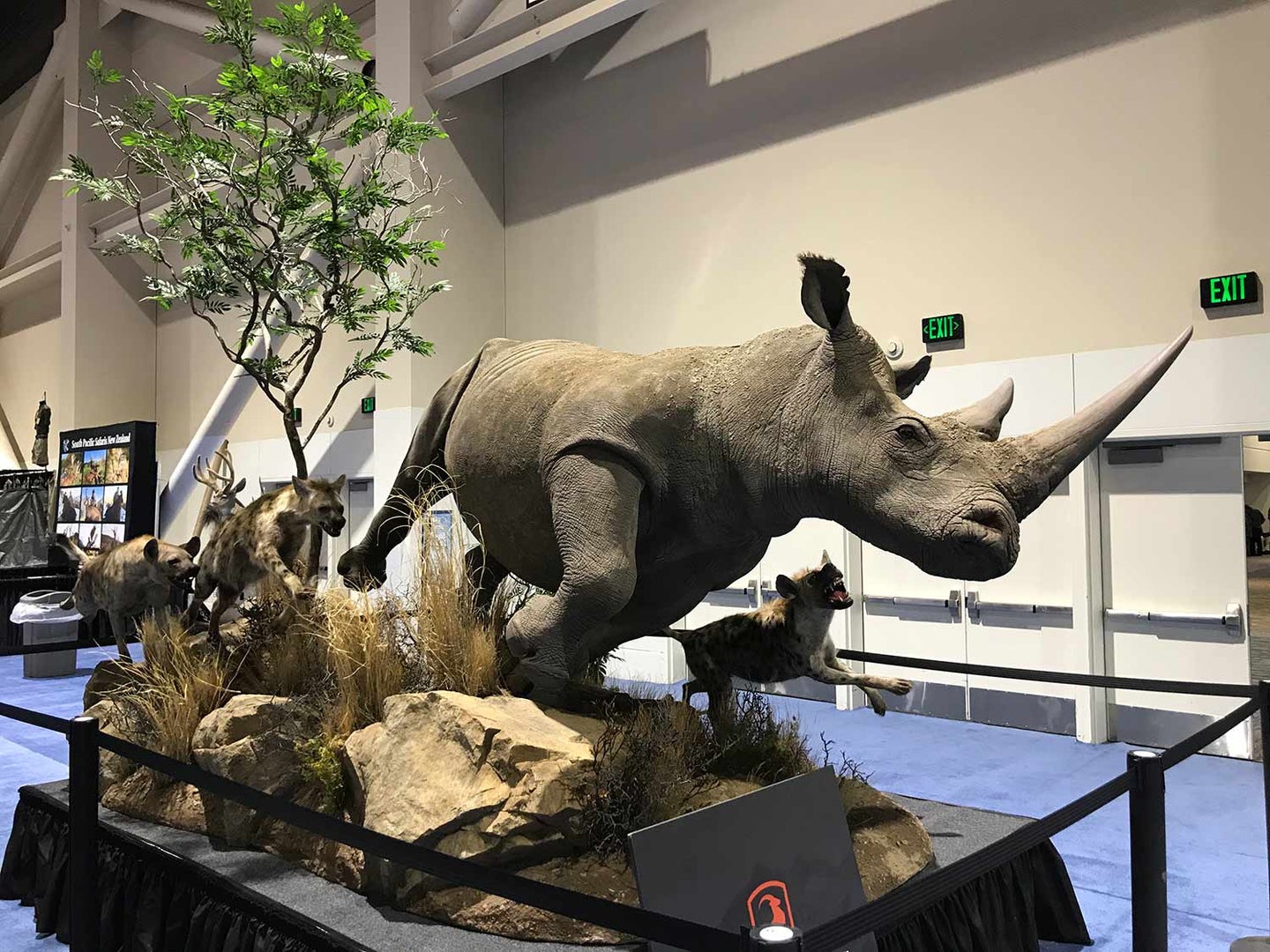 In addition to featuring exhibitors touting some of the world’s most coveted hunting and fishing opportunities, this year’s Safari Club International Convention, held in Reno, showcased work by renowned wildlife artists. Following are a dozen of the more striking exhibits.

1. On the Horn of a Dilemma

A white rhino bull lumbers along while being harassed by three hyenas. This piece combines the taxidermy of real animals (the hyenas) with a replica (the rhino). Kanati Elite Taxidermy has developed a proprietary process using synthetic composites to reproduce materials like skin and horns. On a “green hunt” for a rhino, the hunter darts the animal, takes photos and measurements, and turns over the material to Kanati to create a true-to-life reproduction.

A polar bear tracks across the Great White North in search of a seal snack. Kanati Elite replicated the giant beast by creating custom armatures and covering them with “faux fur”—a blend of natural and synthetic fibers that looks like hair.

The Pope & Young Club world-record brown bear—shown here squabbling with a bald eagle that has stolen his breakfast—was arrowed in 2018 by the owner of Brush Country Studios, Chris Cammack. The bear was taken on the Alaska Peninsula and measured 10-feet, 6-inches and had a 29 4/16-inch skull. The eagle is obviously a reproduction, and the scene is given extra depth with the sockeye salmon swimming around the base.

4. Putting His Foot Down

This lion evidently tired of being antagonized by this pair of hyenas and took matters into his own paws. The lion was taken by a hunter guided by Pete Fick Safaris in the Bubye Valley Conservancy, an 850,000-acre reserve in southern Zimbabwe. Animal Artistry prides itself on creating original works of wildlife art that show movement and share the story of the hunt—and on doing so within 90 days of receiving the trophies and deposit.

Read Next: Make Your Own Deer Skull Mount With DIY Taxidermy

Catfight! You can almost hear the hissing and snarling as these two leopards prepare to go at it while a young zebra cowers beneath a rock, hoping to remain unnoticed. This entire diorama, including the rocks and trees, was fabricated and comes apart in sections for transportation. After the Convention the display was bound for its permanent home in a private trophy room.

Here a Nile crocodile drags a zebra to certain death in the depths. The zebra is a taxidermied skin, but the croc is a reproduction, starting out as a carcass cast, which is then sculpted and air-brushed for the ultimate in realism. When mounting skins, Advanced Taxidermy carves every armature from scratch (as opposed to relying on commercially available forms), so that they have the exact-size mannequin to fit.

This leopard is about to enjoy a meal of impala while a hyena waits patiently—or not—to claim the leftovers. The diorama was created for a residential trophy room by Advanced Taxidermy, a Canadian company that prides itself on telling stories with its pieces. The leopard and impala were taken by Paul Schexnayder, and the hyena was donated by Jim Shockey.

These three Arctic wolves strike menacing poses in this diorama by Advanced Taxidermy. The Arctic wolf, also known as the white or polar wolf, is a subspecies of the gray wolf. This trio was trapped as opposed to hunted.

Read Next: 22 Of The Greatest Mounts You’ve Ever Seen

This diorama depicts a brown bear having returned to feast on its cached caribou, only to be joined by two uninvited guests. Animal Artistry specializes in creating dramatic works of art that pay homage to the animals and the hunt. This display was on a rotating stand, imparting real movement to an already action-packed scene.

A big-bodied male lion tries taking down a “dagga boy”—an old Cape buffalo bull beyond his prime. The animals were shot in an area of Tanzania where lions don’t have especially large manes. They were positioned in this way to not only create drama but also conserve space within the private trophy room in which they will be displayed. Woodbury Taxidermy specializes in creating “nature art” and is also a game-processing facility.

Another world record mounted by Brush Country Studios: this one recognized by both the Pope & Young and Boone & Crockett clubs as the largest-ever hunter-killed Rocky Mountain bighorn. The massive ram was taken in 2018 by Clayton Miller, who drew the special tag in the South Dakota Badlands. The ram scored 209-1/8 inches, surpassing the previous record, which had stood for 20 years, by almost 10 inches.

A common theme this year was predators vying for prey. Here a leopard tries to haul a young zebra from the clutches of a pesky hyena. It turns out that the leopard and hyenas were shot in Africa by the same hunter, but the zebra was found dead on a game ranch in Texas. The structure was designed vertically, to conform to space in the residential trophy room.