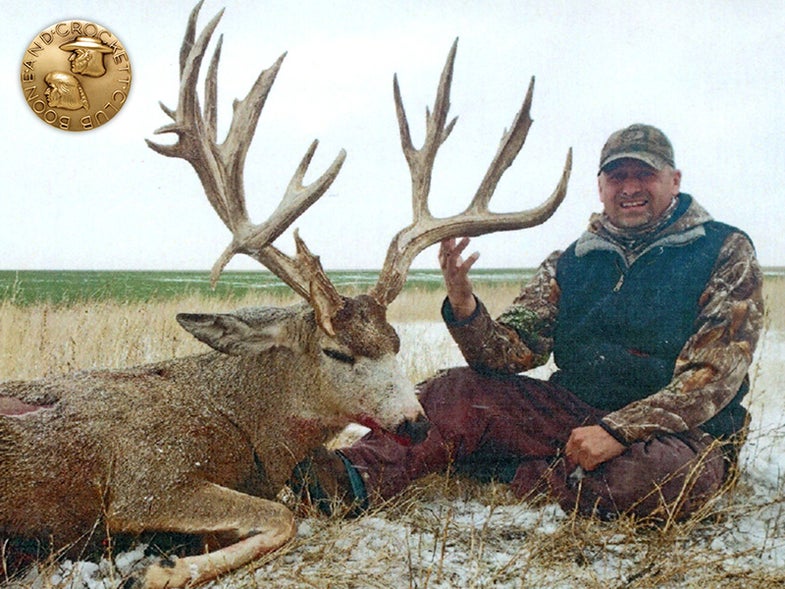 The Boone & Crockett Club does much more for America’s wildlife than officially record the largest big game animals taken in America. But the prestigious Missoula-based organization perhaps is best known as the keeper of records for the biggest of big game collected by the continent’s sportsmen. The following recent entries to the Club’s 31st Annual Big Game Awards Program, which will be held in Missouri next month, includes a dozen pulse-quickening big game animals, and is sure to inspire hunters everywhere.

Arizona’s Navajo Indian Reservation is where William Heinselman shot this incredible buck on Sept. 28, 2020 using a 28 Nosler. He sent a 180-grain bullet into the buck on a 70-degree day. The 263 4/8-inch buck has nearly 64 inches of abnormal points.

Jeff Hubbard of Virginia was hunting woodland caribou last October in Newfoundland and almost didn’t leave his camp that day because the wind was gusting to 80 mph. But his guide said the bulls would be on the move, so he was the only hunter to leave camp, and he’s glad he did. They spotted some caribou, and Hubbard crawled over 200 yards to get within range. He cleaned snow from his scope and made a perfect shot to take this 370 3/8-inch bull. It is the largest woodland caribou bull entered to B&C this year and will be the ninth largest in the B&C record book. You can read the full story of his hunt here.

Eastern Alberta is well known for giving up monster bucks, and that’s where Paul Villeneuve headed in November 2020. He was still-hunting in the snow with his .30-06 near Seibert Lake on Nov. 17. This unusual buck with tremendous antler mass stepped out at just 30 yards, and Villeneuve dropped it. Scoring 192 6/8 inches, the deer is the fifth biggest typical buck recorded in Alberta. It’s also the biggest recorded in the province in nearly three decades.

This remarkable California tule elk was taken by Cory Smith on a sunny, 60-degree day in Mendocino County, California, which boasts a state herd of 5,700 animals. The 369 1/8-inch bull was shot on Aug. 24, 2021 and likely will become the largest B&C tule elk ever taken by a hunter.

Few animals convey the primitive nature of the Arctic North better than the musk ox, and that’s where Alex Therrien hunted his in Sept. 2020: Canada’s untamed Northwest Territories. He and his friends were inspecting an outfitter’s cabin when they spotted a herd of musk ox. The following day on Sept. 10, Therrien put a three-mile, five-hour stalk on them, getting close enough to make a shot with his .30-06. Scoring 130-4/8 inches, it may may become the new world-record musk ox, outscoring one taken by Jim Shockey in 2006.

Coastal North Carolina has an enviable reputation for having an abundance of big black bears, with the state in the top 10 nationwide for B&C bears. Sawyer Barrington’s bruin, taken from Beaufort County, is the third largest Tarheel state bear, with a skull scoring 22 7/16 inches. Barrington took the bear with an open-sight .45-70 rifle and a 405-grain bullet on Nov. 19, 2020.

Kansas has few peers for record-book bucks, but you don’t usually think of mule deer when they come to mind. This 246-1/8-inch Ford County, Kansas buck is the top non-typical mule deer out of the state in over two decades, putting it fourth in the state for non-typical mule deer. Hunter Joe Stout used a crossbow to tag the massive 23-point buck on Dec. 1, 2020.

Bowhunter Jared Bradshaw trekked to the Kenai Peninsula in Alaska to pursue the massive coastal bruins of the 49th State. On May 31, he stalked to 35 yards of this impressive bear; its skull measured 28-15/16 inches.

Daniel Cowley and his pals pursued this outstanding bull for three years, even passing shots in 2018 when the bull was younger. In 2019, Cowley had chances to take the bull on eight different occasions with his bow and passed again. Finally, he swapped his bow for a rifle and collected the magnificent 419 4/8-inch non-typical elk on Sept. 19, 2020 in San Juan County, Utah.

The only place where non-residents can hunt woodland caribou is Newfoundland, Canada. So that’s where archer Gerard O’Hare headed in 2019 to take a bull. The record-book bull, taken on Sept. 2, 2019, scored 323 5/8 inches and sports a 41 5/8-inch spread.

Not many people think of South Dakota when they think of trophy-class mountain goats. But hunter Greg Schweiss was hunting Pennington County on Nov. 19, 2020 when he tagged an impressive 48 2/8 inch goat at only 30 yards with a .30-06. After being trucked in from Alberta in the 1920s, mountain goats escaped into the area from a zoo exhibit. They started an isolated population of about 350 animals in the Black Hills, and more have been introduced since to now offer limited hunting opportunities.

This B&C elk from California in 2021 came from Humboldt County, the state’s southern border for elk range. Hunter Lawrence Ward collected the 386 5/8s-inch bull on Sept. 1, 2021 with a .30-06 rifle and 180-grain Hornady bullet. It’s the third biggest Roosevelt elk taken from California, and the ninth overall for the species.

Bowhunter Tavis Rogers tagged this incredible buck with a longbow on Nov. 18, 2020, in Oregon’s Jackson County. This No. 8 Oregon non-typical blacktail scored 172-1/8 inches, and was DNA-tested to confirm the species.

Sonora, Mexico lured Wisconsin bowhunter Tom Muza on Jan. 4, 2021, to collect a B&C ram that’s the best from that year, scoring 185-6/8 points. The Badger State was experiencing below-freezing conditions when Muza arrowed this ram in 90-degree temps south of the border.