While snow storms and freezing temperatures have been the norm in the U.S. this month, Scandinavia has been dealing with... 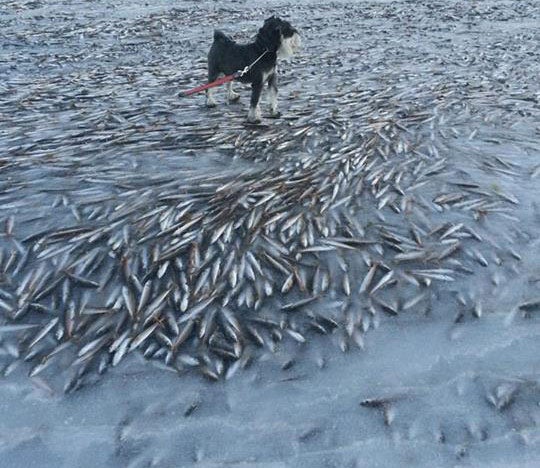 While snow storms and freezing temperatures have been the norm in the U.S. this month, Scandinavia has been dealing with some chilly days of its own. In the village of Lovund, Norway on Sunday, temperatures dropped so quickly an entire school of herring froze along the shore, reports the Huffington Post.

Lovund resident Ingolf Kristiansen was walking his dog along the bay when he spotted the frozen herring trapped in the ice. He snapped this photo and posted it to Facebook. Experts aren’t sure why the fish entered such shallow waters, although an expert at Norway’s Institute of Marine Research guesses cormorants might be responsible. The birds could have driven the herring close to land, making it difficult for the fish to escape into deeper water that wouldn’t freeze. Saltwater freezes at about 28 degrees Fahrenheit, and temperatures were well below that on Sunday.

But fish aren’t the only species succumbing to Norway’s freezing temperatures. A few weeks prior to this incident and 200 miles northeast of Lovund, a European elk froze while wading through Kosmo Lake. According the Huffington Post, the mammal was discovered by an ice skater who initially mistook the antlers for a piece of wood.