Experts: The Texas “Chupacabra” was Definitely a Raccoon

Last week we wrote about a couple from Texas who claimed to have captured a baby chupacabra. Jackie and Bubba... 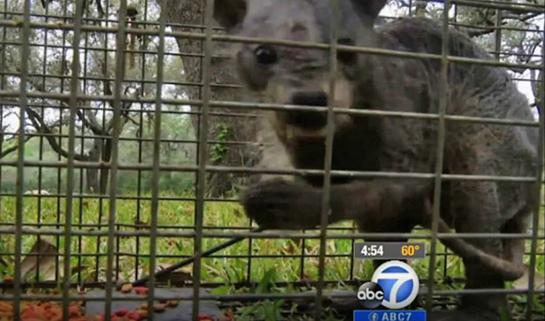 Last week we wrote about a couple from Texas who claimed to have captured a baby chupacabra.

Jackie and Bubba of Ratcliffe, Texas spotted the hairless animal munching on corn in a tree on their property and trapped it in a cage. They then proceeded to nickname the creature “Chupie” after the blood-sucking chupacabras of Latin American legend. Then came the interviews for local news teams.

Eventually, Texas Parks and Wildlife officers convinced Jackie and Bubba that Chupie was in fact a raccoon with manage, and they must euthanize the critter or set him free. The couple euthanized Chupie, but skeptics contend that without a DNA test (which TPW never conducted) the truth would never be known.

Well, a handful of wildlife experts we interviewed want to put the Texas Chupacabra myth to rest once and for all.

“It is totally 100 percent a raccoon,” said Stanley Gehrt, a wildlife specialist at Ohio State University’s School of Environmental and Natural Resources. “The guy in the video that said raccoons don’t make that sound is wrong. So is the wildlife expert that guessed it was a canid. Everything about that animal, from its morphology, its behavior, vocalizations, etc. are exactly what one would see in raccoons. In fact, it doesn’t look a whole lot different than some raccoons we catch that are covered in mud or soaking wet from a night in a rainstorm.”

So what specific features rule out the chupacabra as a candidate and make specialists suspect a raccoon? Zoologist and raccoon expert Dr. Sam Zeveloff at Weber State University said its size and shape suggest a raccoon rather than any other mid-sized mammal. The characteristic forepaws of a raccoon are also a key identifier.

“I’m looking at the fingers and it’s definitely not a canid,” wildlife rehabilitator and raccoon specialist Deb Welter said after viewing the clip. “The wildlife guy [in the video] said he thought it was a canid. No, absolutely positively not. It’s not a fox, a coyote, or anything like that. You can see that from its hands. Any of the canids have paws more like a dog. They can separate the toes but they can’t move them like hands.”

But let’s face it, maybe chupacabras share forepaw characteristics with raccoons. How do we conclusively rule out the blood-sucking creature in this case? Chupacabras are named for their vampiric tendencies to drain blood from goats, but according to LiveScience this creature lacks the necessary anatomical structures for such a feat.

“The mouth and jaw structures of raccoons, dogs and coyotes prevent them from creating a seal around their victims, and, therefore, physically prevents them from sucking the blood out of goats or anything else,” wrote science-based paranormal investigator Benjamin Radford.

All three experts concluded the animal probably had some form of mange, although Gehrt noted there have been documented cases of hairless raccoons. Gehrt said he often receives chupacabra videos that always turn out to be mange-infected coyotes or foxes. Mange is a treatable condition and animals receiving treatment usually show marked improvement, according to Welter.