A Minnesota hunter is lucky to be alive after he was mauled by a 525-pound black bear on Saturday morning.... 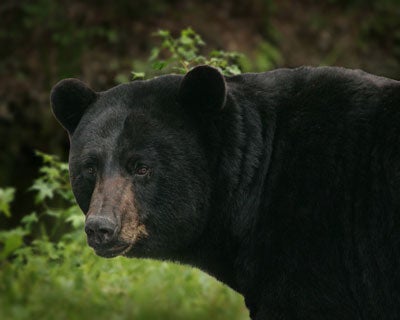 A Minnesota hunter is lucky to be alive after he was mauled by a 525-pound black bear on Saturday morning.

Craig Lindstrom, of Wyoming, Minn., was bear hunting with several friends in the swamps near Duxbury, Minn., when the attack occurred. The hunt actually took place on the day before when someone in Lindstrom’s party shot the bear with an arrow.

The group initially planned to trail the bear early the next morning, but they thought warm temperatures might spoil the meat. So Lindstrom and two of his buddies began trailing it it in the dark, around 11:30 p.m. They found the bear on the ground about a half hour later, but the bear focused on the group and charged.

“And that’s when they yelled ‘It’s big and it’s coming your way.’ All of the sudden I heard him [Brandon Johnson] screaming—felt like 10 minutes, but was probably two minutes—literally screaming, screaming and you knew he was being mauled,” Lindstrom told KARE 11.

Lindstrom said he began to pray aloud but soon realized that his friend was not dead yet. Rather he was fighting off the bear with a knife.

Johnson most likely survived thanks to Lindstrom, a Chicago City firefighter, who immediately administered first aid.

“I had two tourniquets on both of his arms. I have a strap, I strapped it around his arms to hold his arms, I put his hands in his pockets and we had a belt and we led him with the belt,” Lindstrom detailed. “I was very emotional all day because I’ve never been a part of anything like this. I cut people out of cars. I’ve hauled people out of bad car accidents on Highway 8. This is just the worst it was. But at the same time, the best there was – because of him.”

It took the party more than three hours to make it out of the woods and to a place where they could call 911 at the Pine County Sheriff’s Office.

“His will to keep going forward, I thought he was dead 10 to 15 times. He would fall down and he told us about telling his parents, his fiancée, his kids—tell them I love them,” said Lindstrom.

Johnson was flown to North Memorial Hospital in Robbinsdale where he underwent surgery for two broken arms and a dislocated wrist, among other injuries, according to the Star Tribune. He is expected to recover.

The bear, which died about 50 yards from the mauling, was retrieved. “We are going to mount that thing,” said Lindstrom. “So this will be another story. It just happens to be the biggest one.”

This is a more heartening outcome than that of another recent bear attack in New Jersey, which resulted in the death of a hiker.