Yes, you can eat tree bark as a safe and nutritious wild food–as long as you are using the right... 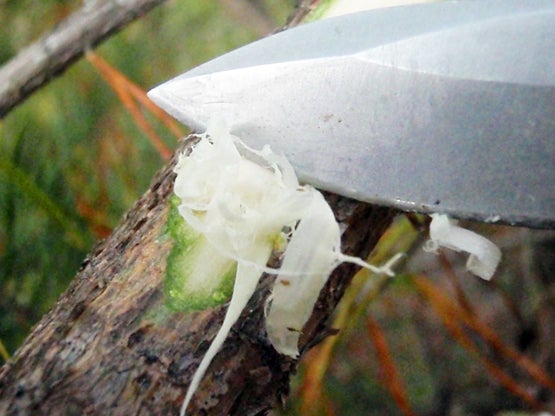 Yes, you can eat tree bark as a safe and nutritious wild food–as long as you are using the right part of the bark from the right species of tree. And to clarify, we are not talking about the crusty, corky grey part of the bark. The bark section of choice for food is the cambium layer, which lies right next to the wood.

Plenty of our ancestors used this edible inner layer of tree bark as both food and medicine. Many Native American cultures included the inner bark of pines and other trees as an important staple of their diet. This use was so common in some areas that early explorers visiting North America recorded acres of trees stripped of bark for food by the locals.

In Sweden and Finland, Pine bark bread has been made for centuries from rye flour, with the toasted and ground inner layer of pine bark added. The Sami people of northern Europe used large sheets of Pine bark that were peeled from the trees in springtime, dried out and stored for use as a staple food throughout the year. This bark was reportedly consumed fresh, dried or roasted to a crisp.

Inner tree bark can be obtained in large amounts year round, just by “skinning” a single tree, or by taking advantage of living limbs that have broken off during storms. The bark is relatively nutritious, packing about 500-600 calories to the pound, but it may be bitter tasting depending on the species and the tree’s growing conditions. Most inner bark contains a surprising amount of digestible starches, some sugar, vitamins, minerals, and the bark also has tons of fiber, so brace yourself for a good internal scrubbing.

At least one Native tribe is well known for making bark an important part of their daily diet. There is a tribe in the mountains of upstate New York called the “Adirondack”, and that name translates to “bark eaters” from the Iroquois language.

Which Trees Have An Edible Bark?

Check out OL’s 333 best survival skills. Get the book >

Of all the contenders, Pine seems to be the genus of choice around the Northern Hemisphere, being used the most by our forebears. In fact, most species of Pine in North America should be considered “edible plants”. The inner bark and Pine nuts can be eaten as food. A spoonful of chopped Pine needles can be steeped in a cup of hot water for 10 minutes to make Pine Needle Tea, which is a Vitamin C powerhouse (one cup of tea containing as much as 5 times your daily requirement).

Warning: Pine Needle Tea, and eating Pine needles, may be harmful to unborn babies–so find something else to snack on if you have a bun in the oven. Also, there is some question about toxins in the needles of the western Ponderosa Pine and the southeastern Loblolly Pine, so these two should be avoided for tea.

This first job is to positively identify the tree species with a reputable tree book, or an actual tree expert.

Next, we need to shave off the grey, outer bark; and the greenish middle layer of bark; to get down to the rubbery, white or cream colored inner layer. If you shave too deeply, you’ll feel the difference between the tree wood and bark. The bark feels much softer. The tree wood is hard and seems slick to your knife blade. Cut and peel off the whitish, rubbery inner bark. This is what you are after.

If you would like to fry the bark to eat it now, you can use the bark fresh from the tree. Just fry the bark strips for a few minutes on each side, in a pan with a few spoons of oil, unit it becomes crispy. I like to call this “Bark Jerky”, which is a close estimate of the texture, but not the flavor. Pine bark tastes like Pine sawdust, because it pretty much is sawdust, so you’ll want to find creative ways to blend it into other foods so that it goes down easier.

If you want to make flour from the bark, or just save it for later, the next step is to process the bark by drying it. Drying the bark in the sun on a rack or on a flat rock is your best bet, if you are not using the bark right away. It should take about a day to dry the bark strips, depending on the weather and the bark strip size. Once dried, you can create the fabled pine bark flour, which actually resembles oatmeal more than wheat flour. If you want to go old school, you can grind up the dried bark between two stones, but a faster way is to drop pieces in a blender or food chopper. Pulse the device to powder the bark, and then store it in a cool dark place.

Gain a massive amount of “trail cred” by breaking out some Pine Bark cookies on your next hunt or hike. An easy path to success is to modify your favorite oatmeal cookie recipe, by switching half of the oatmeal for Pine bark flour. My family recipe for oatmeal cookies is normally 2 cups of quick cook dry oatmeal, so I just drop that to one cup of oatmeal and add one cup of Pine bark flour for a chewy and piney, yet strangely delectable treat. Give it a try, and let us know if you liked Pine bark or one of the other edible barks, by leaving us a comment.