Spring is one of the most remarkable seasons for foraging. Fast plant growth leads to quick changes in the trees,... 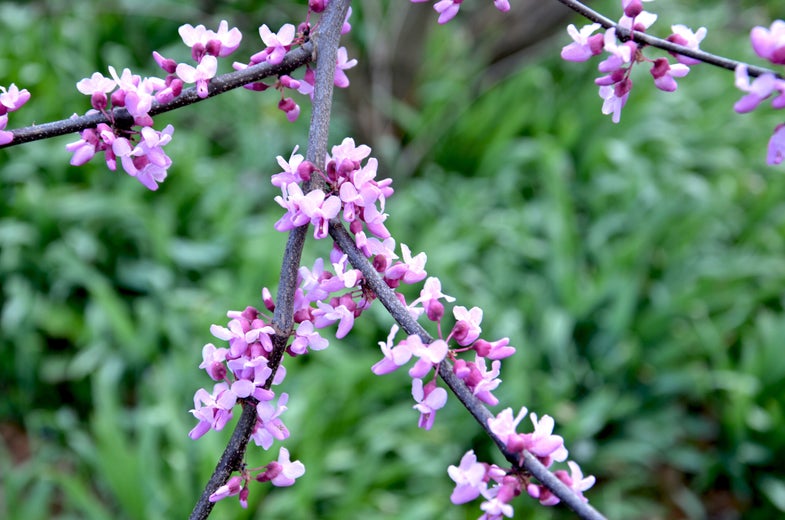 Spring is one of the most remarkable seasons for foraging. Fast plant growth leads to quick changes in the trees, shrubs and other woody plants. Act swiftly to seize these once-a-year treats from edible spring tree parts.

Redbud
These pretty pink flowers (above) are great in salads. The redbud (Cercis canadensis) is a small understory deciduous hardwood tree typically 20 to 30 feet (6 to 9m) tall with dark bark. It’s one of the first trees to flower in the spring. It has heart-shaped alternate simple leaves that grow on slender twigs. Before the leaves emerge, small pink buds appear and open into odd looking curved pink flowers ½ inch (1.5cm) long. To most people, these shapes most closely resemble bunny slippers. The unopened buds and open flowers are a great addition to spring wild salads, and they can be incorporated into baked goods for an interesting color accent. The small green seed pods that appear after the flowers can be harvested and cooked as a vegetable; however, they are mildly toxic raw.

Sassafras
Sassafras (Sassafras albidum) is a rough, grey barked deciduous hardwood tree in the laurel family (Lauraceae). This tree grows in old fields and the edges of woods, as well as an understory tree in woodlands. It has yellowish to greenish twigs with an alternate branch pattern. The most distinctive trait about this tree is the variety of leaf shapes. Simple oval leaves are common, as well as leaves with one deep sinus resembling a mitten, and leaves with two deep sinuses. The young leaves of sassafras are tender and taste of citrus flavors. They are great as a snack, in salads, or dried and used as a soup thickener.

Maple
These deciduous hardwood trees are native to Asia, Europe, northern Africa and North America. Maple (Acer spp.) has opposite branching simple leaves that are commonly veined and lobed in a palmate pattern. The two main food uses of maple are sap and seeds. Boiling the sap into sugary syrup is only an option in late winter, but the seeds are collected later in the spring from distinctive fruits are called samaras. These are the little “helicopters” or “whirlybirds” that spin on their way to the ground from the tree. The nutlets (seeds) from most species can be cooked almost like a bean by boiling in water.

Spruce
There are 35 known species of spruce (Picea spp.), which is a coniferous evergreen tree in the pine family. Spruce is found in the northern temperate and boreal regions. These trees range from 65 to 200 feet (20 to 60m) tall. The sharp, square needles help to distinguish spruce from pine and fir, and the dangling cones of spruce differentiate from fir. While fir twigs have needles growing from two sides of the twig, creating a flat shape – spruce needles are attached singly to the branches in a spiral pattern. The spring shoots of spruces can be eaten, and the needles can be steeped in hot water for a vitamin C rich tea. Fresh or dried spruce tips are also used to flavor spruce beer, and the inner bark can be dried and ground into flour like fir.

Fir
Fir is a genus of about 50 species of evergreen coniferous tree in the pine family. They can be found through the mountains of North and Central America, Europe, Asia, and Northern Africa. These trees can reach heights of 30 to 260 feet (10 to 80m) tall. Fir is differentiated from the pines by the attachment of their needle-like leaves to the twig by a base that resembles a little suction cup. Another quick identification trick is to look at the cones. Firs have erect cones, while pine and spruce cones dangle down. The inner layer of bark (cambium layer) of fir is the main food use. The outer bark should be shaved off to reveal this spongy cream colored layer. This is shaved off and dried until brittle. The bark can then be ground into a course meal and used as oatmeal or flour.

Black birch
Birch species are typically small to medium-sized deciduous hardwood trees up to 65 feet (20m) tall, and commonly found in temperate climates. Birch has alternate simple leaves that are toothed, and singly or doubly serrate. The black birch is the best one for wild food. The dark colored twigs provide the best proof of identity. Scrape them and you’ll smell a strong scent of wintergreen from the methyl salicylate in the bark. In late winter, the sap begins to flow. Tap the larger trees as you would a maple, about a month or two later than the maple sap run. Collect the abundant sap often, and boil the sap down into strong, sweet wintergreen flavored syrup. The broken twigs can be steeped in hot water to make an excellent tea. When this is done during the sap run, your tea is naturally pre-sweetened.

Pine
Many species of pine (Pinus spp.) are found throughout North America. In the spring, the tender twig tips can be pinched off and eaten raw or cooked. One of the best approaches is to fry them lightly and salt them while still hot. These look more than I bit like caterpillars, but should satisfy any vegans in your group. The pollen can also be collected by shaking the pine “flowers” into a bag. This pollen is high in protein and it can be added to flour as a supplement.

What’s your favorite spring edible from trees? Leave us a comment to tell us which one you like best.