Most people seem surprised when I mention my affinity for butchering game with stone tools. Yes, you should always have... 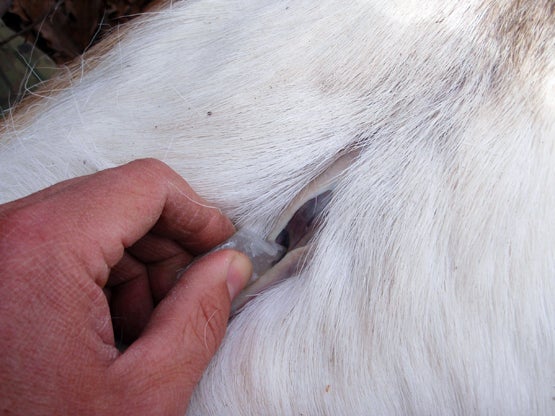 Most people seem surprised when I mention my affinity for butchering game with stone tools.

Yes, you should always have several modern knives while out hunting and camping. But what happens if there is an emergency and your gear becomes lost or is stolen? It’s always nice to have a backup plan, or two, or three. Surgical-sharp, disposable blades can be as close as the nearest creek rocks.

Not every rock can be broken to create a good cutting edge, but most parts of the globe have abundant rocks that will work. Some of the best choices for cutting stones are flint, chert, jasper, chalcedony, quartz and obsidian. That last one is a form of volcanic glass common on the west coast, which is capable of being broken into such sharp pieces that the cutting edge can be just one molecule thick in some spots. That’s 25-times sharper than scalpels used in modern surgery! So put away any ideas that rock won’t cut.

Time To Make The Blades

Stone blades aren’t too hard to make, but you do need some safety equipment. Make sure you are wearing gloves, preferably made from leather. You’ll also need glasses or goggles of some sort, so that sharp stone chips don’t fly into your eyes.

Now, find a piece of flint, quartz, or another suitable rock. If you’re not sure what’s in your area, find out what the local Native American arrowheads were made from. That type of rock will probably be your best bet for making blades.

Select a piece of rock about the size of a sandwich in thickness and width. This will be the rock you are breaking for blades. Select another rock that’s round, and a little bigger than a large egg. This round stone will be your hammer.

Now, with gloves and goggles on, hit the thinnest edge of the “sandwich” rock with your hammer stone. Hit it hard–right on the edge–and follow through with the strike, like your’re driving a nail with a hammer.

If you picked a good rock and hit it hard, you should have knocked a flake of stone from the underside of the rock. That piece will be your butchering tool.