When you start a campfire, how do you do it? Do you use a log cabin fire lay? A teepee... 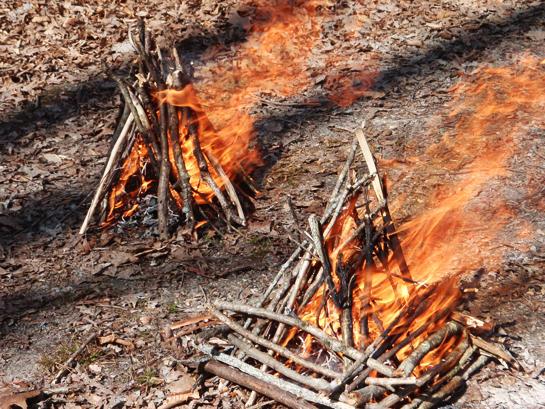 When you start a campfire, how do you do it? Do you use a log cabin fire lay? A teepee fire lay? Or is there a pile of wet logs and a can of diesel involved? I hope it’s not that last one.

For years, I have been a big fan of the teepee fire lay. It just seemed like the natural shape to allow the fire to climb at a steady pace. But I wanted to see if there was any solid evidence that one fire lay did something that another style did not, so I set out with equal amounts of the same fire building materials to determine if there were any major differences between a log cabin fire and a teepee fire. Using two pounds of sticks and a quarter-pound of twigs for each fire lay, I built a cone-shaped teepee and a square log cabin with a small cone core. With a handful of dry oak leaf tinder in the center of the fire lays, I lit each one with a quick kiss from a Bic lighter.

The dry conditions and breeze during my test were a great help in the ignition of both fires. The four ounces of dry small twigs in each lay lit very quickly and immediately began to burn both structures. As I had suspected would happen, the teepee produced a larger volume of flames within the first five minutes of testing, and the teepee flames reached a taller height than those of the log cabin. The teepee flames hit two feet in height, while the log cabin flames were a few inches shorter than that.

As the structures became fully engulfed in fire, they both collapsed inward on themselves. You won’t always get that effect in a teepee lay–sometimes it falls to one side. The log cabin-style fire offers more structural support. Thankfully, both of our test lays fell inward, giving us a fair comparison.

After ten minutes of burning, a few small flames flickered in both fire lays, going out at the same time. The remaining beds of coals, however, were quite different. The teepee coal bed was a nice, round pile, while the cabin lay was a spread-out square of thinner coals. Two thumb thick sticks on the cabin’s upwind perimeter did not burn; all of the teepee sticks were consumed. The coals continued burning for many minutes afterward in both fire lays, but 30 minutes after starting this test, the log cabin coals were dead. At 32 minutes, I still had enough coals in the teepee pile to rekindle the fire, which I did.

My hunch was confirmed: When all factors are equal and the same amount of materials are used, the teepee burns with a bigger, taller flame and produces a more concentrated, long-lived coal bed. What I thought was most revealing in this test is that a mere 2.25 pounds of twigs and sticks can produce a half-hour’s worth of fire and coals. Maybe I’ll try stretching my firewood supply a little more the next time I have a campfire.

Got any experiments you’d like us to try? Done any yourself? Let’s hear about them in the comments.