Yes, a butane lighter is (and should be) your best friend when it comes to making fires out in the... 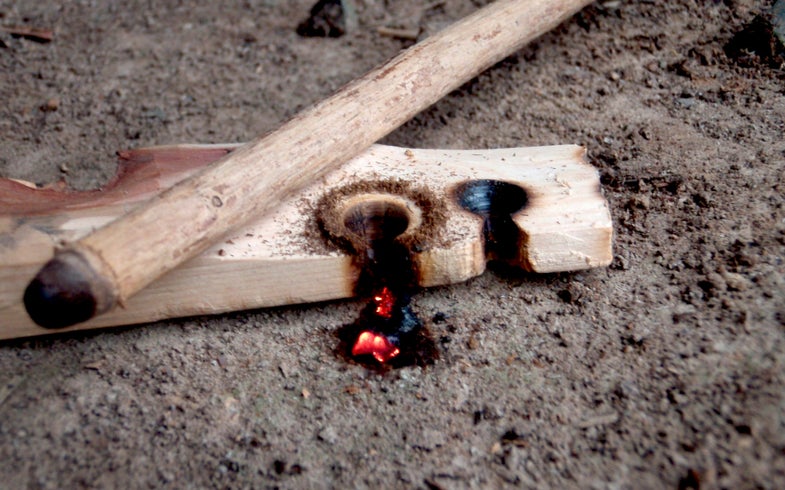 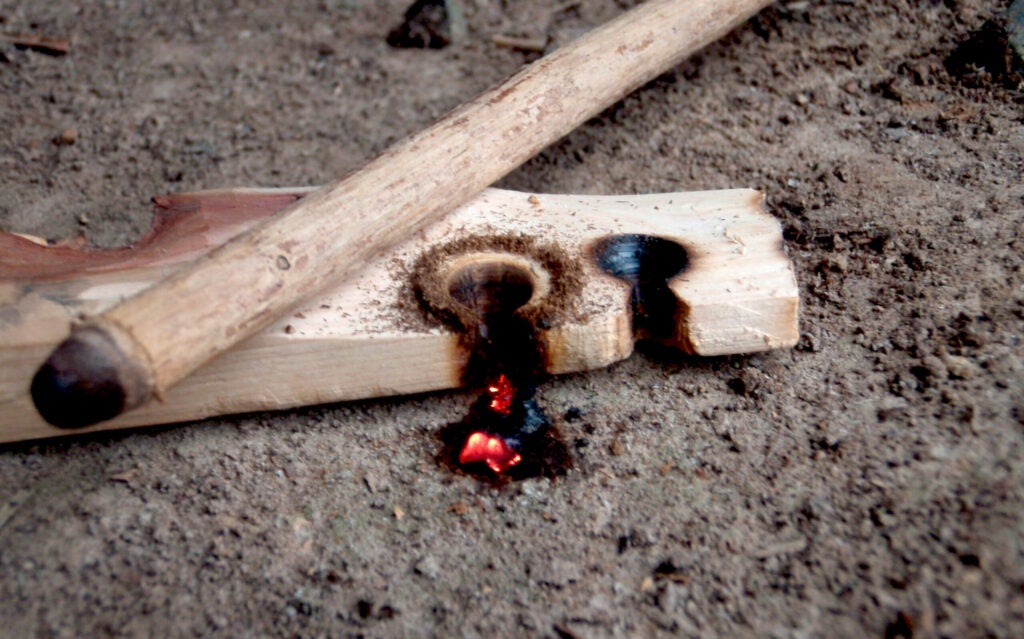 Yes, a butane lighter is (and should be) your best friend when it comes to making fires out in the wild, but you shouldn’t forget about the methods that have come before it. I love friction fire making, and it can be both a challenge and a delight to work on this ancestral form of fire building. Of all the primordial methods of creating a spark, the hand drill method of friction fire making is about as raw as it gets. You only need four things to put the kit together. There is a wooden board that lies on the ground, a drill that is made from wood or a weed stalk, a tool (like a knife) to shape the materials, and some tinder to light the spark. Once the gear is assembled and shaped, you spin the drill against the wood board with your bare hands until an ember is created. Here’s how to do it.

Drill: The drill is a straight piece of dead, dry plant stalk with its rough surfaces scraped or sanded away. Pick a drill that is between one and two feet long and approximately half an inch in diameter. The wider end is almost always used as the friction end, which spins against the board. My top five choices for a drill are:

Fire board: The fire board is a flat or relatively flat board about half an inch thick and at least twice as wide as the thickest drill you intend to use. The board could be wider to accommodate a second row of holes. Make sure the board is flat enough on the bottom to prevent wobbling. Great choices include:

Select a drill or several drills that are dead and dry. Sand or scrape away any rough spots and carve off branches. Round each end by sanding or carving and use the thicker end as the friction end against the fire board. Select a dead, dry piece of wood to serve as the fire board. Carve it flat enough on the bottom to avoid wobbling when in use. Create a flat surface on the top in which to drill holes.

How To Use Hand Drill Equipment

Set up the hand drill for a sitting or kneeling position, with a foot or knee holding down the board. It is best to have a dry piece of bark, dead leaves, or some other dead, dry material under the fire board to protect it from the damp ground. A small chip of wood or bark or a thick, dry leaf should be placed under the notch to collect the coal. Spit on your hands or rub dried pine pitch on the drill for grip before starting to drill. Start at the top of the drill with hands pressed tightly together. Spin the drill quickly while pushing the drill down into the fire board. This downward pressure and spinning produces heat and dust for coal, but it also causes the hands to gravitate down the drill. When you reach the bottom of the drill, hold it firmly in the hole with one hand and quickly move back to the top of the drill. The faster you can start spinning again, the less heat will be lost from the fire board and drill.

Drill like this until there is smoke and the notch is full of dust. Once the notch is full of dust, increase your drilling speed and make several runs down the drill to ignite this dust. If the dust in the notch is still smoking after you have stopped moving, then a coal has formed. If the dust stops smoking after you stop, then resume drilling at high speed to ignite the dust. When the dust is glowing or still smoking on its own for several seconds, tap the board and lift itaway carefully to expose the coal. Place the coal in a good nest of dry, fluffy tinder and close up the bundle. Blow gently to help the coal grow and burst into flames.