We may earn revenue from the products available on this page and participate in affiliate programs. Learn More › Innovations... 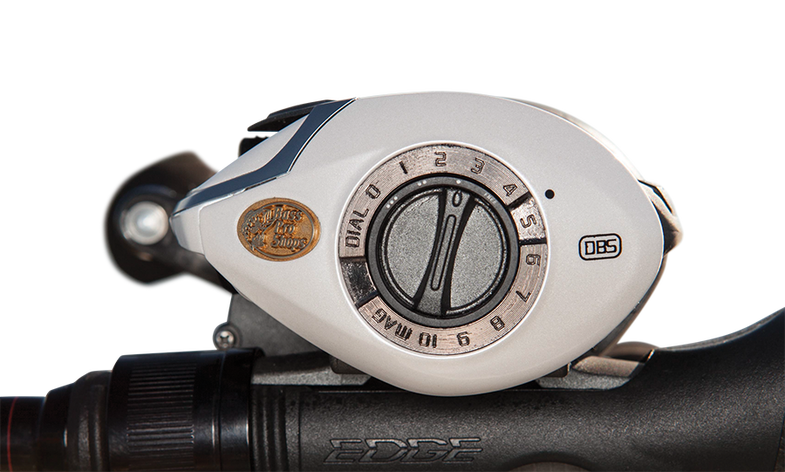 Innovations
Here are five tackle design ideas that aren’t only clever, but will also enhance your overall angling experience.

1. Dual Magnetic Controls
The use of both magnetic and friction casting controls has been standard on many baitcasting reels for decades. In fact, reels that feature one or the other have become less common than those that tout both. However, the Bass Pro Shops CarbonLite’s dual magnetic casting controls—in addition to a separate friction control—allow fishermen to dial their line-management precision to a whole other level.

2. Trigger Hook Keeper
Few things are as frustrating as a poorly positioned hook keeper (see “Our Pet Peeves“). By placing it in the tip of the handle trigger on their new casting rods, Lew’s and Wright & McGill have eliminated the chance of it getting in the way when you’re fishing.

3. Line-Weight Indicator
Remembering which pound-test line is on a particular rod can be a challenge, especially for tournament fishermen in the heat of competition. The line-weight indicator dial on the butt sections of the Bass Pro Shops Johnny Morris Signature Series and Quantum Smoke PT rods makes the line weight easily visible at a glance.

4. Skeletal Grip
Sensitivity is everything in a fishing rod, and Wright & McGill has essentially eliminated the fore grip on its Skeet Reese Victory Pro spinning rods to offer direct access to the blank. You’ll feel every tick and nibble.

5. Carbon Handles
Carbon is used extensively in rod blanks and reels for its unmatched strength-to-weight ratio, but it’s also a remarkably sensitive material. The carbon handles of the Edge rods allow fishermen to be in constant contact with the blank.

Most Improved
Wright & McGill steps up its game.

Stan Wright and Drew McGill began offering hand-tied flies on their newly designed Eagle Claw hooks in the late 1920s. In the decades since, the Wright & McGill brand has been associated with tackle of varying levels of quality.

For 2015, the Skeet Reese Victory Pro Carbon line of rods and reels represents a dramatic increase in quality over recent years’ offerings.

The reels, with their extensive use of carbon, were rigid and virtually devoid of flex, their retrieves were silky, and their drags were more than capable of managing stubborn fish. We tested the size-30 spinning reel and the 6.4:1 caster.

Boutique Tackle
Check out these small manufacturers who make big-time rods and reels.

1. Searching for a workhorse spinning rod? Look no further than the Sewell S1 Inshore ($140; sewellrods.com). The 7-footer (medium action with a fast taper) sports a MicroWave guide system and is capable of throwing lures weighing between ³⁄₈ and 1 ounce on 10- to 20-pound-test line.

2. 13 Fishing—a company that got its start making fishing rod components—has produced one of the finest baitcasting reels on the market: the Concept E ($380; 13fishing.com). Ceramic spool bearings spin in perfect concert as a six-way centrifugal cast control feathers line fluidly.

3. Fitzgerald Rods offers a multipurpose 7-foot spinner that impressed with its versatility. The Stunner HD ($170; fitzgeraldrods.com), with its medium action and ¼- to ⁵⁄₈-ounce rating (6- to 12-pound-test), is an all-day fishing machine.

4. Duckett Fishing’s line of super-popular rods has made them a top semi-custom rod builder. Their new Duckett 360 baitcaster is proof they’re serious about the reel game, too (see The Winning Reels).

5. The new Edge brand of rods is the latest brainchild of legendary rod maker Gary Loomis. Handmade in the U.S., the First Strike ($400) and Black Widow ($550) lines include a combined 16 rods that feature nothing but state-of-the-art materials.

How We Test: Behind the Scenes