12 Awesome, Old-School Reels That Changed How We Fish 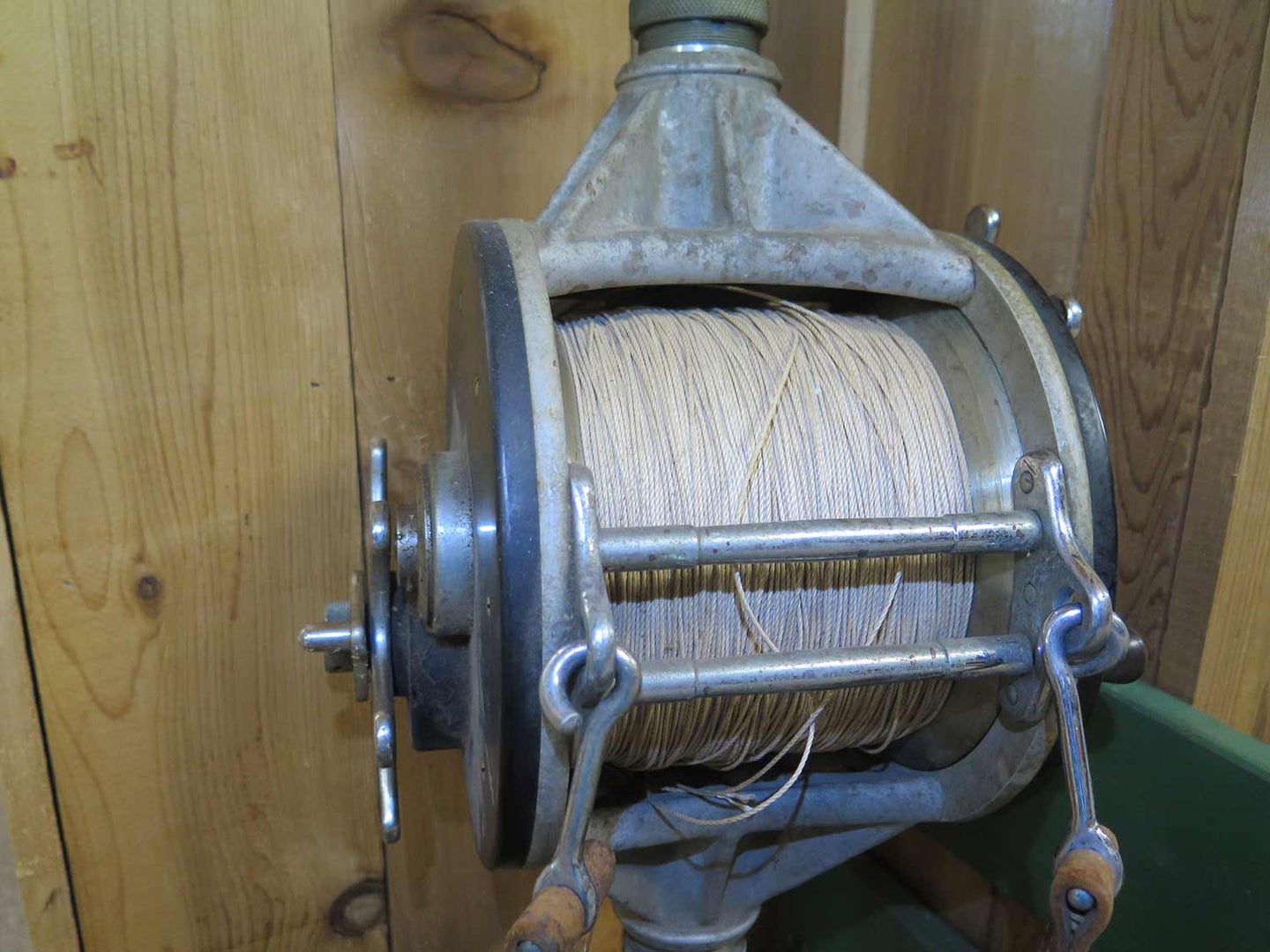 Fishing tackle can be as basic as a pole, a length of line, a weight and a baited hook. That’s seldom good enough, though. There’s something in human nature that never settles for the status quo and even fishing tackle can be made better. What we lack, we invent; what we find deficient, we improve.

Consider fishing reels, which have been around for hundreds of years. Chinese art from the Middle Ages depicts anglers using poles with reels mounted to their bases. The first were crudely manufactured and used to retrieve line rather than to cast it out. Europeans followed with their own line gatherers, or “winches” as reels were often called. It wasn’t until the late 18th century that motivated inventors really started improving on previous designs and how they worked.

We travelled to the History of Fishing Museum in Branson, Mo., to take a look at some of the first reels that changed the fishing game, and set in motion an era of invention and innovation that hasn’t ended yet. A few of these reels are priceless; others, not so much, but still worthy of recognition as fishing forerunners:

The Billingshurst Birdcage was the first single-action fly reel produced in the U.S. It was patented in 1859 by a Rochester, N.Y., gunsmith named William Billingshurst who used brass, nickel, coin silver and gold-plating in the production of his reels. In 2007, a Billingshurst silver fly reel with original case and paperwork sold at auction for $40,000.

Where the Billingshurst encased silk fly line had a circular frame of parallel wire, the original Orvis reel, circa 1873 and patented in 1874, had a perforated spool and line click. Made in Manchester, Vt., by Charles F. Orvis, the reel’s frame design more or less became the model for fly reels. The handle was removeable and the reel was stored in a custom-made wooden case. The Orvis had no equal until the Perfect reel was introduced by William and John Hardy of Alnwick, England in 1891.

Though it was marketed as “The Illingworth Casting Reel,” the English-made reel is considered to be the first spinning reel because of the way line leaves the small spool at the front and is rewound. Patented in 1905 and designed to be used with light silk line and lighter lures than conventional reels could cast effectively, the Illingworth was the first in a series of spinning reels developed by the company. Four subsequent models more closely resembled spinning reels of the modern era, and were less complicated in design. In 1932, Hardy introduced the Altex, the first spinning reel with a full bail arm.

In the second half of the 18th century Onesimus Ustonson of London invented a revolving-spool reel with multiplying gears, meaning that a single turn of the handle would turn the spool more than one revolution. It was not a casting reel, however, and line was released from it by hand. Perforations in the reel mount allowed the user to tie it to a rod with leather cords. The quality of the Ustonson and the high regard in which it was held is attested by the inscription “Makers to the Queen,” meaning royal warrant had been granted. The queen referred to is Victoria, who became ruler of the British Empire in 1837. However, Ustonson reels also received royal warrant from her predecessors, King George IV and his younger brother, King William IV. At auction, some of the earliest Ustonsons have sold for more than $20,000.

A.H. Fowler’s “Gem” fly reel marked the earliest time rubber was used in the manufacture of a fishing reel. Introduced in 1872 by Fowler, a dentist in Ithaca, N.Y., the side-mounted reel’s casing was made of hard rubber or vulcanite. It resulted in a much lighter reel, but one that was fragile and prone to breakage. A trout size and a bass size were marketed by Fowler. Though the fly reel never caught on among the fishing public, Fowler’s split-bamboo fly rods were best-sellers.

George Snyder is considered the father of the “Kentucky reel,” a generic name that covers a family of handmade reels produced over several decades of the 19th century by various craftsmen in that state’s “Bluegrass Region.” Snyder was a watchmaker and clockmaker in Hopewell, Ky. (now Paris), and began making a primitive flyfishing/baitcasting reel with multiplying gears beginning about 1820. It’s believed that Snyder made less than 10 reels for family members and friends, and only four of them have been accounted for. In 1997, nationally known fishing tackle collector Karl White, co-founder with his wife Beverly of the History of Fishing Museum, purchased a Snyder for $31,500—the most ever paid for an American reel. White’s Snyder is on display in the History of Fishing Museum.

Around 1833, Jonathan and B.F. Meek of Frankfort, Ky., began making multiplying-gear reels from nickel, silver and brass at their watchmaking shop, though incidentally to their primary business. Known for their beauty and quality of worksmanship, the Meek reels—later, Meek and Benjamin C. Milam reels—became popular throughout the U.S. and Europe. Beginning in 1853, B.F. Meek & Milam formed a partnership and began the mass production of Kentucky reels. However, with the advent of cheaper reels made by other manufacturers in the early 20th century, the Meek & Milam reels could not compete in terms of affordability. Meek reels are prized by collectors, and those in excellent condition sell for $1,500 or more.

Though Dr. James A. Henshall is best known for his Book of the Black Bass, published in 1881, he also was co-inventor with Dr. William Van Antwerp of the first revolving-spool casting reel designed expressly for bass fishing. It was known as the Henshall-Van Antwerp Black Bass Reel and Chubb Fishing Tackle of Post Falls, Vt., manufactured the reel from 1885 through the mid-1890s. Though any baitcasting reel of the time could be used for bass fishing, what distinguished the Henshall-Van Antwerp from its contemporaries was the mechanical internal brake, or drag, that applied pressure to the spool when a large fish was hooked. Extremely rare now, the Henshall-Van Antwerp Black Bass Reel originally sold for $15. Today it’s valued at between $3,500 and $6,000, depending on condition and whether it’s accompanied by its original leather case.

From the opening decade of the 20th century to the early 1970s, manufacturers such as Shakespeare, Pflueger, South Bend, Bronson, Langley and Garcia ruled the reel market. In 1973, a south Alabama entrepreneur named Lew Childre, Jr., introduced the Speed Spool baitcasting reel and it was a game changer. The innovative reel featured a narrow V-shaped spool that rendered the reel virtually backlash-proof. Revolutionary in a number of ways, the unique feature of the Speed Spool was that its spool, handle and line guide disengaged at the push of a button to facilitate longer controlled casts. Scalloped no-slip handles and a black textured finish were popular finishing touches. The original Speed Spool reels were made for Childre by Shimano, a Japanese bicycle company whose emblem was mounted in the side plates of the earliest Speed Spools.

After Childre was killed in a plane crash in 1977, Shimano entered the American market with its own line of reels. In effect, Childre’s death marked the beginning of the ascension of Oriental fishing tackle companies.

Before saltwater big-game reels were equipped with internal drags, most anglers used reels that had leather patches mounted above the line spool that helped slow down a freight train of a fish that weighed hundreds of pounds. When a hooked fish made a long run, the angler would press the leather patch down against the spool to slow it down. That primitive drag system effectively ended in 1913 when Julius Vom Hofe Jr. developed a big-game reel with an internal drag. The mechanism was an improvement on a star drag developed earlier by his brother Edward and incorporated in the Vom Hofe Salmon Reel. The star drag enabled a saltwater angler to tighten or loosen pressure on the spool by turning a star-shaped collar on the handle one way or the other. To hedge his bets and provide a backup drag, Julius Vom Hofe Jr., left the leather patch in place. Vom Hofe’s reel was a result of a design provided by William Boschen, whose contribution was acknowledged with his initial added to the model name: “B-Ocean.” Before the reel reached the market, Boschen had used a prototype to catch a 315-pound broadbill swordfish, which was ­ the heaviest ever caught by a recreational angler up to that time. Within a few decades, every major manufacturer of freshwater and saltwater reels had added star-drag models to their lineups.

J.A. Coxe of Los Angeles is credited with constructing the first trolling reel larger than 9/0 size. Big-game fishermen who went after yellowfin and bluefin tuna and billfish put the J.A Coxe 12/0 to good use starting in the 1920s. Coxe, a former president of the Avalon Tuna Club, was a close friend of Western author Zane Grey and built a special 16/0 reel that Grey used to catch black marlin off Australia’s coast. Grey’s reel was mounted on a hickory rod that had guides on both sides. When one side developed a set after hours spent fighting big-game behemoths, the reel was remounted on the other side prior to the next fishing trip. Coxe eventually sold his company to Bronson in 1935, but the reels’ exorbitant cost—almost $1,000 for the 12/0 during the Depression years—ultimately led Bronson to stop its production.