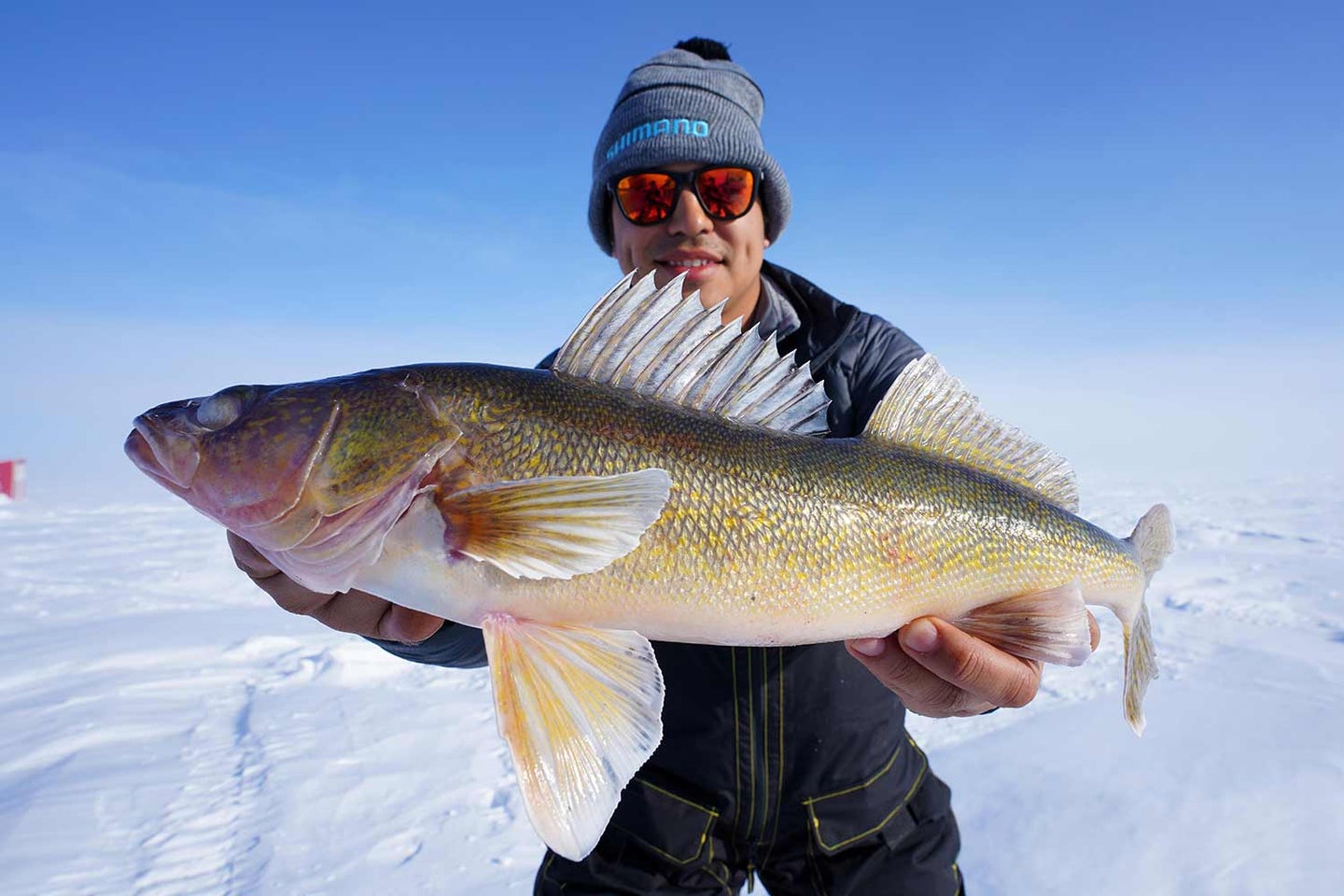 No different than in open water, each trip on the ice is unique: we fish at different depths, with different lures, for different species, each time we venture on the ice. As a result, every angler should own a basic arsenal of ice rods and reels that will cover the typical contingencies they may face during the hardwater months. Let’s begin by dissecting the issues surrounding rod, reel, and line selection for ice fishing.

Just as when fishing open water, the variables we need to consider when picking an ice rod are length, power, and action. Of these, length may be the most significant difference between soft- and hardwater rods; while a long rod for bass fishing might extend into the eight- to nine-foot range, the longest rod you’re likely to ever string up for ice fishing is 48 inches long, and most will be significantly shorter. To a certain extent, rod length correlates with your target species: most panfish rods fall into the 20- to 30-inch range, walleye rods are frequently 32- to 36-inches long, and apex predators, like pike and lake trout, are often best pursued with rods that are 40- to 48-inches long. A secondary consideration is whether you plan to fish in a shelter or outside, exposed to the elements. Most shelter-bound anglers will select rods on the shorter end of the typical species range, simply because of the limited real estate available within the confines of a flip-over or hub. In contrast, high-mobility fishing outside of a shelter poses no rod length restrictions.

Power and action are often used incorrectly as synonyms, because in reality, these terms describe two fundamentally different rod characteristics. The power rating of a rod – such as light, medium, or heavy – describes the typical weight that will cause a rod to flex. Thus, a rod with an ultra-light power rating, which an angler might select for presenting tiny tungsten jigs to shallow panfish, will be flexed by far less weight than would cause a medium or heavy power rod to bend. The typical lure weights listed on the blank are a good indication of that rod’s power. The action of a rod describes the position along the blank where the primary bend or flex will occur. Think about action in terms of the rod’s “backbone” – a fast-action rod will have its primary flex point close to the tip, and as a result, possesses a long, stiff backbone for powerful hooksets. In contrast, a rod with moderate action will have its flex point farther down the blank, closer to the handle, where a less substantial backbone can act as an effective shock-absorber to deal with unpredictable surges from larger predators.

How To Pick The Right Rod and Line

Three classes of reels are useful on the ice. Traditional spinning and baitcasting reels carry most of the load, and in reality, some of your open-water reels can also be very effective in a hardwater setting. Typical 500- to 1000-series spinning reels with a smooth drag will cover many panfish and walleye applications. Remember that small spool diameters will induce a significant amount of unproductive line coil in monofilament and heavier fluorocarbon lines, which makes the line hard to manage as it comes off the spool, and also produces fish-repelling lure spin once the bait is in the water. As you move up to larger targets and longer, heavier-power rods, you should transition to larger, 2000-series spinning reels. Frequently, anglers targeting lake trout in deep water, or large pike in the shallows, will benefit from using traditional baitcasting reels, both for their capacity to hold and manage heavier line as well as their ability to retrieve significant lengths of line with only a single revolution of the reel’s handle. A niche group of hardwater anglers are devotees of in-line reels. These large-spool reels sit beneath the rod, where a spinning reel would normally be mounted, but retrieve line without causing it to twist as it is deposited on the spool, similar to a baitcasting reel. Large-arbor, in-line reels are typically used to rapidly deploy small- or medium-sized baits to the depths while minimizing fish-repelling bait spin once the lure is in the water.

Line selection for ice fishing requires anglers to consider several factors that are unique relative to open-water presentations. First, because their activity levels are generally much deeper than typically observed in the warmer months, fish will often spend a considerable amount of time inspecting a lure or bait before committing to the strike. As a result, we want live baits to swim as naturally as possible while minimizing line visibility. These factors lead many anglers to select a thjn diameter, 100 percent fluorocarbon leader or main line when chasing fish beneath the ice; 2- to 3-pound test is typical for panfish, while 6- to 8-pound test is typical for walleyes. Fluorocarbon will also sink faster than monofilament, delivering baits to fish before they swim away, and absorb far less water than either mono or braided lines, making fluorocarbon less susceptible to becoming stiff or frozen when arctic winds blow. Deep-water presentations often call for a braided main line to ensure positive hooksets at long distances. Pick an eight-strand braid with a tight weave to minimize water absorption, or a braid that has been treated with a water-repellent coating—especially when fishing outside of the warmth of a shelter.

Now that we understand the parameters, let’s examine five common hardwater presentations and the best rod-reel-line combination for each.

Early in the ice season, many quality panfish remain in relatively shallow water – often 8 feet deep or less – and will be closely associated with remnant green weeds. Fish will linger in these general areas until thick ice and snow cover restrict winter’s limited daylight, turning inviting green weeds into a fish-repelling, decaying brown mass. An entertaining and productive way to target these shallow panfish is by sight fishing: peering down the hole directly at the bait, and setting the hook as soon as it disappears from view. Anglers will typically fish within a shelter when sight fishing, which helps to minimize glare and maximize visibility beneath the ice. Using a high-contrast bait – like a tungsten jig dressed with big, white waxworms – also makes it easier to determine when a bite has occurred.

Key to the sight fishing presentation is the proper length rod, so that the angler can comfortably hold the rod handle and look down vertically from the rod tip, into the water, and down to the bait. Indeed, the best sight-fishing rods are short – 20 inches is the perfect length – and have light or ultra-light power coupled with fast or extra-fast action. Pair this rod with a 500-series spinning reel and spool up with 2- to 3-pound test fluorocarbon for the ultimate skinny water panfish combo.

Even before soft water turns crunchy, a substantial fraction of a lake’s crappie population – especially many of the larger fish – will gravitate toward primary basin areas, frequently 25- to 40-feet deep. These crappies will suspend near the edges of the basin, roaming in large schools that feed high in the water column on baitfish, or toward the bottom on larval forms of aquatic insects. Sonar is key to finding and targeting these fish, as the schools are highly mobile beneath the ice, and can feed at virtually any depth – from 5 feet beneath the ice all the way to the muddy bottom.

Crappie-specific rods might be 28-inches long for shelter-bound anglers, up to 32 inches long for hole hoppers. Look for a medium-light power rod and a sensitive, high-carbon blank with fast or extra-fast action that can detect panfish bites in deep water and still deliver effective hooksets. A 750-series spinning reel is a good choice for crappies, especially when spooled with thin diameter braid – choose one with the same diameter as 4- to 6-pound test mono – linked to a 6-pound test fluorocarbon leader.

There is no more classic hardwater walleye presentation than a jigging spoon dressed with a minnow head. From the windblown expanses of Devil’s Lake to the famous Mille Lacs mudflats to the western basin of Lake Erie, more walleyes are flopped onto the ice because of jigging spoons than perhaps any other single lure.

A finely-tuned combo for presenting jigging spoons will bring more winter walleyes topside. Start by selecting a 36-inch rod that has medium power and fast action. We’re looking for a rod that has the perfect blend of sensitivity for strike detection, sufficient backbone to set hooks into bony mouths, yet enough forgiveness and flex to manage the headshakes of a big, angry walleye. Pair this rod with a 1000-series spinning reel with a smooth drag, and spool up with 6- to 8-pound test fluorocarbon which offers a little more stretch and forgiveness than braid while minimizing line visibility.

Walleyes On A Dead Stick

Dead-sticking walleyes is a highly effective way to catch fish that are initially drawn to the erratic action of a jigging spoon, but are unwilling to attack a highly mobile lure. Offer those same walleyes an easy target, like a vulnerable, free-swimming minnow, and you’ll convert many of those lookers into biters. The dead-stick technique simply refers to presenting a live minnow nearby, and at the same or similar depth, to an actively-worked jigging spoon. Call the fish in with the spoon, and get them to bite the minnow; this is the hardwater version of bait and switch.

The key to effective dead-sticking is to prevent the walleye from feeling any pressure from the rod until it’s too late. Thus, anglers will often select rods that are 36-inches long or longer, with medium-light power and moderate action. A soft, slow blank like this will flex quite readily and offer minimal resistance as the walleye swims away—until the fish has repositioned the bait and the hook point is poised to bite. A 1000-series spinning reel spooled with limp 4- to 6-pound-test fluorocarbon will have you on your way to dead stick success.

From the Great Lakes to high mountain reservoirs and the wilderness lakes of Manitoba, big winter lake trout offer a true trophy fishing experience that has surged into the collective consciousness of ice anglers. Lakers differ substantially from other hardwater targets in that their activity levels beneath the ice will frequently exceed their typical soft water disposition. This means aggressive strikes, lengthy battles, and fish that barely squeeze through a 10-inch hole can be the norm, rather than the exception.

Leave the panfish wands and the walleye sticks at home when chasing lakers. Instead, select rods that are 42- to 48-inches long with a medium-heavy or heavy power rating and moderate to moderate-fast action. We’re looking for a rod that can handle a powerful fish in the 15- to 30-pound class that is capable of powerful, line-peeling surges back to the depths. Equip the rod with a 2000-series spinning reel or a baitcaster, depending on the position of the reel seat relative to the line guides. Spool up with 30-pound-test braided line, and attach a 15-to 20-pound test leader of 100% fluorocarbon to hook and land one of these magnum sight feeders of the deep.