Cougar sightings in Boulder are more frequent during the winter months, but officials say it's the 18th report of a big cat within city limits in six weeks 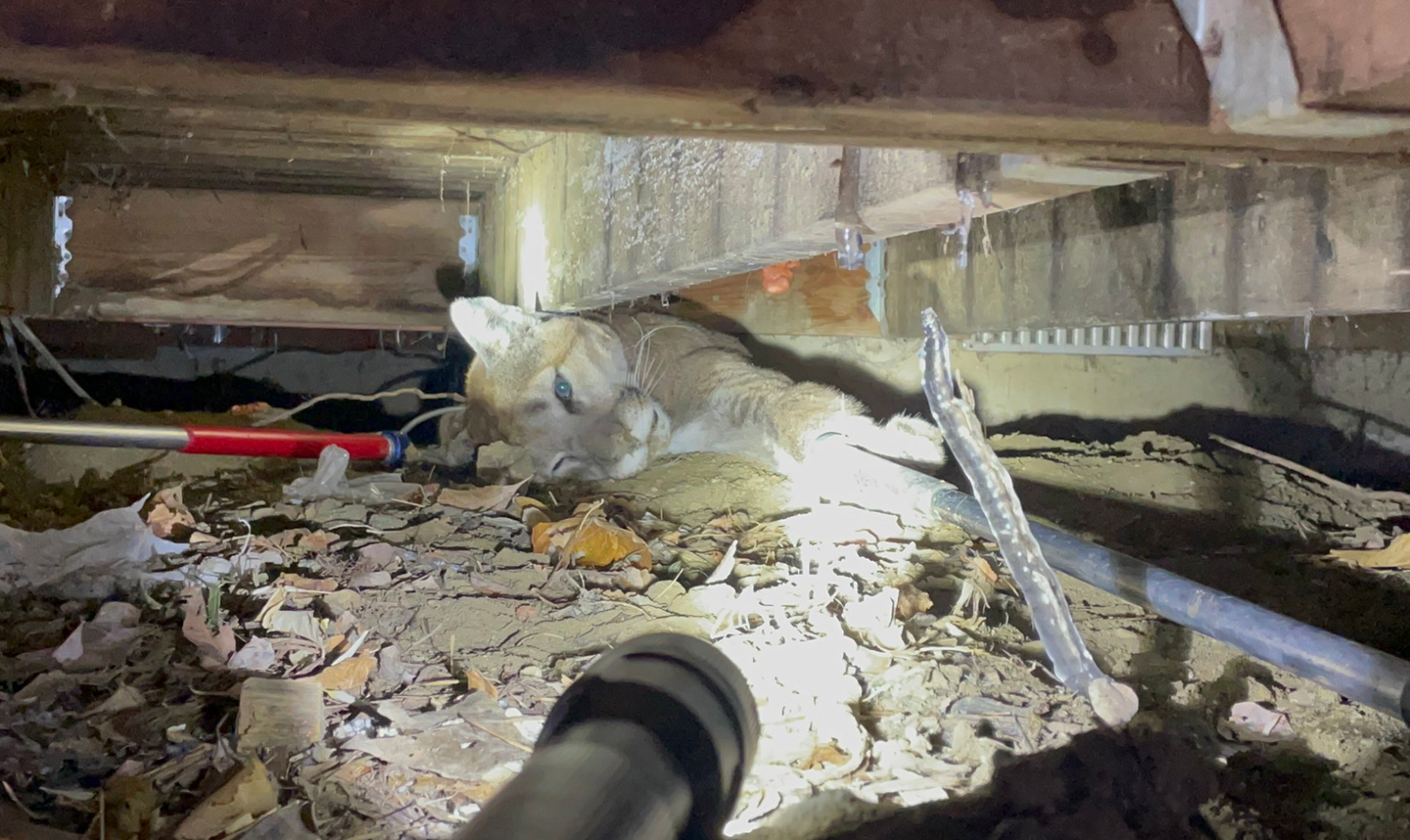 The male cat was tranquilized and relocated to a more remote area. Colorado Parks and Wildlife
SHARE

Colorado Parks and Wildlife officials successfully removed and relocated a mountain lion from underneath a Boulder porch Sunday afternoon. Cougars are typically seen more frequently in the bustling Front Range town during the wintertime, CPW says. This is the 18th report that the agency has received involving mountain lions in the Boulder area since Jan. 15.

Homeowners living near the intersection of 23rd Street and Panorama Avenue initially reported the mountain lion at 7:30 a.m. on Feb. 27, after they were alerted to the cat’s presence by their dog. Boulder Open Space and Mountain Parks rangers and animal protection officers from the Boulder Police Department were the first to arrive on scene, according to a CPW news release.

CPW wildlife officer Tyler Asnicar arrived a short time later and tranquilized the mountain lion. Officials pulled it out from under the porch just before 10 a.m. The cat was then relocated and released in a remote part of Larimer County, in the northern part of the state, by 1 p.m. that afternoon.

The mountain lion was a sub-adult male in good condition and it weighed approximately 120 pounds. CPW officials said that mountain lion activity in Boulder “is to be expected” during the winter months. “Increased winter activity is fairly typical as [cougars] follow their prey base down, and particularly the mule deer that move into lower elevations this time of year,” Asnicar explained.

It is a sub-adult male, around 120 pounds. It is now being transported to be released in a remote location far away from the city. pic.twitter.com/ftx2KnTC9Z

Asnicar said that the agency has received multiple reports of pets in the area being taken by a sub-adult lion in recent weeks. He said there are likely two or more sibling cats behind these disappearances, and that the cougar that was relocated this weekend “may or may not have been one of those cats.” CPW also confirmed on Sunday that the agency has received a total of 18 reports involving mountain lions in Boulder since Jan. 15.

Sightings of mountain lions in Colorado neighborhoods occur beyond the Front Range, and the cats are occasionally spotted by residents living on the west slope of the Rockies as well. In January, a homeowner in Glenwood Springs captured video footage of a cougar eating an elk on his porch, but the cat disappeared into the woods before a wildlife officer with CPW could arrive.

The state estimates that there are somewhere between 3,000 and 7,000 mountain lions currently living in Colorado. Hunters in the state have traditionally played a major role in managing this population, and they harvested 526 cougars during the 2020-21 lion season.

Four state legislators, all of whom represent districts on the state’s Front Range, attempted to end this management earlier this winter by introducing legislation that would have banned the recreational hunting of bobcats and mountain lions statewide. S.B. 22-031 was immediately met with opposition from a broad coalition of hunting and wildlife conservation groups, however, and by the time the bill received a hearing in front of the Senate Agriculture and Natural Resources Committee, three of the bill’s four sponsors had withdrawn their support. That left State Senator Sonya Jaquez Lewis (D-Lafayette) as the sole sponsor of the legislation. S.B. 22-031 died in committee on Feb. 3. Lewis was the only “yes” vote.