Californians Are Losing It After the Death of the ‘King’ Puma. That’s Not a Good Thing for Mountain Lion Conservation

Public interest in wildlife is great. Devout idolization of a single wild animal is not 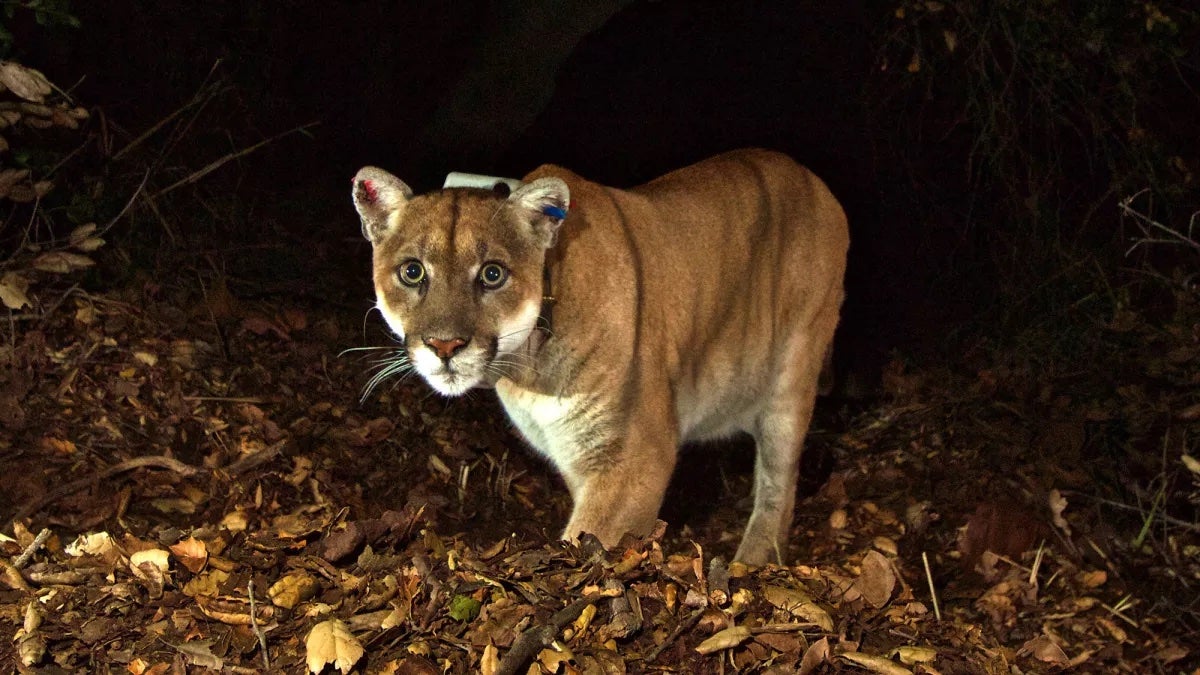 P-22 was one of America's most famous mountain lions. National Park Service
SHARE

A 12-year-old wild mountain lion named P-22 was euthanized Dec. 17 after being struck by a car and wandering into a backyard in Los Angeles. The California Department of Fish and Wildlife captured the cat; an examination revealed liver, kidney, and heart disease, immense weight loss, parasites, and an unhealthy coat in addition to the ruptured diaphragm, herniated organs, skull fracture, and eye trouble likely resulting from the impact.

When a person passes away, outpourings of grief and support are appropriate. People leave behind a breadcrumb trail of memories, interactions, and moments shared with loved ones and acquaintances.

Here’s the thing: P-22 was not a human. He was a wild animal. But in the wake of P-22’s death, members of the puma’s home community in Los Angeles are in a dark place.

“I am so sad for the passing of P-22 and am crying as I write this,” one contributor said in an L.A. Times article commemorating P-22. “He was a true icon and rockstar, one of the most beloved celebrities in Los Angeles. A true survivor. I thank him for bringing awareness to the plight of urban wildlife, and especially the urban mountain lions. May he forever roam happy and free in the great beyond. P-22: Los Angeles loved you with all [its] heart. I love you and will forever carry you with me in my memories.”

CDFW director Chuck Bonham fought back tears while announcing the cat’s death publicly. This display revealed a surprising attachment to a single wild animal from an individual who oversees a nearly-$600-million budget for managing wildlife in the third biggest state in the nation.

“I saw a reference yesterday…about the city considering P-22 to be Los Angeles’ king. I know this morning that you feel you’ve lost your king, but he’s never ever going to be forgotten and we can’t let him be forgotten.”

It goes without saying that the emotions of Los Angeles residents went unreciprocated for the last decade. P-22 was entirely unaware of his fame. He had no knowledge of the books, documentaries, and murals dedicated to him, nor of his Facebook and Instagram accounts with the tens of thousands of followers and tongue-in-cheek, first-person posts. He chased mule deer and slept while Los Angeles celebrated “P-22 Day” every October 22 since 2016. His digital footprint could make him one of the most anthropomorphized animals in history, up there with the likes of Shamu and Cecil the Lion.

Sure, some public interest in a charismatic critter can help promote conservation and biodiversity, especially for that particular species. But the sentiment for P-22 rocketed past healthy public interest and wandered into serious obsession territory. Anthropomorphizing wild animals has a long list of detriments, among them distorting our human relationship with the wild world around us, clouding sound wildlife management decisions, and creating a hierarchy of species worthy of concern that prioritizes the cute and fuzzy.

Survival in the Urban Jungle

P-22 first showed up in Griffith Park in 2012 as a 3-year-old. The most novel part of his arrival was what roads he crossed to get there: the 101 and the 405, both four- to six-lane freeways that had killed mountain lions in the past.

Within two weeks of P-22 first appearing on camera, National Park Service biologists conducting a study on cougars in the Santa Monica Mountains captured, sedated, and collared him for further study. Trail cameras photographed his movements and behavior. P-22 mostly ate mule deer and avoided humans in the park. His apparent lack of threat to the public and an ample natural food supply made it easy to justify not relocating him. Still, scientists wondered how long he’d stay in the park. A glaring lack of female mountain lions was a clear reason for the lion to leave.

“Scientists assumed P-22 would eventually leave Griffith Park to find a mate or a bigger territory,” an L.A. Times article from April 2022 reads. “Most male pumas in the Santa Monica Mountains have about 150 square miles to roam; P-22’s territory is about 6% that size. But, it seemed, he knew prime real estate when he saw it.”

In December 2013, P-22’s already-growing fame got a major boost when photos of him in front of the Hollywood sign made National Geographic Magazine. Suddenly, P-22 wasn’t recognized as a predator that strayed from his original home range into a dangerously small pocket of urban wild. He was seen as a celebrity roaming the hills with all the other stars. Trail cameras were his paparazzi, mule deer his fad diet.

After the National Geographic story, P-22’s life became more intertwined with modern urban society. When biologists captured P-22 to update his collar in 2014, they noticed evidence of rodenticide in his system and severe mange as a result. The rat poison likely came from eating a dead rodent. Biologists administered a topical treatment for the mange and some vitamin injections and released him back into Griffith Park.

In 2015 he spent hours in a crawl space under a home in Los Feliz. He made headlines again in 2016 when a koala disappeared from the Los Angeles Zoo. Although it couldn’t be confirmed that P-22 was the culprit, the situation raised questions about whether there was enough room for humans and predators to coexist in Los Angeles.

The Power of the Fan Club

Like many other cultural obsessions, people celebrated P-22 with lots of merchandise. Some are proud owners of a $50 P-22 stuffed animal. Others don ears, a tail, and a faux GPS collar as part of the official P-22 costume. “I Heart P-22” t-shirts and stickers match “King of the Hills” Nalgene water bottles and resin casts of his pawprint. Proceeds from these purchases support the National Wildlife Federation’s #SaveLACougars campaign. His face is tattooed on many a body part, including the upper arm of the #SaveLACougars campaign director.

There are real benefits to this sort of publicity: The campaign has largely rallied around the Wallis-Annenberg Wildlife Crossing. Construction of the $90 million wildlife bridge spanning the 101 freeway began in April 2022 and should be completed in 2024. This project will improve habitat connectivity for wildlife, including mountain lions, in the Santa Monica Mountains.

The wildlife bridge is a major silver lining to P-22’s otherwise abnormal existence. The National Park Service and CDFW decided to capture and conduct a health examination on the old cat after it stalked, attacked, and killed a leashed chihuahua in November 2022 and attacked another one earlier in December. CDFW and the NPS deemed this behavior a potential “sign of distress.”

Even though healthy predators are known to kill pets, in P-22’s case, it was likely the result of his ill health. Then he was hit by a vehicle, captured, and euthanized after an examination. Director Bonham acknowledges that Los Angeles “put him in this predicament because of our built environment.” But he remains adamant that the future can be brighter for urban wildlife.

“We can fix this. We need everyone to stand up, raise their voices, create this movement to fix that built environment so these majestic animals have the freedom to roam and connectivity for their future,” he demands into the camera.

But the undercurrent is clear: as long as wild critters like P-22 roam urban spaces, they won’t be treated like wildlife.

“Scientists caution against anthropomorphizing P-22, but Angelenos can’t help but see themselves in the big cat,” one article reads. “He battled traffic on the 405 and never wanted to do it again. He’s carved out a life in a crowded city. And though he’s still handsome for his advanced age — most pumas in the wild don’t live past 12, and he’s already there — he’s terminally single.”

The Aftermath of P-22

If P-22 lived unaware of Los Angeles’ unhealthy obsession with him, his slow, undeniably painful death was certainly impactful, although not in the way you or I might hope it would be. For example, most Californians who oppose predator hunting as a healthy part of wildlife management  (mountain lion hunting has been banned in California since 1990) are probably entrenched in those views. When you evaluate a population based on your passion for an individual, emotion replaces science. Perhaps a few individuals will recognize that other fates like rat poison, disease, getting struck by a vehicle, and lethal injection are not kinder or cheaper than the swift end a hunter provides. But I expect such folks are few and far between after P-22’s lionization.

If anything, some Angelinos seem eager for the next charismatic predator that stumbles across the 405 into the royal throne once held by ‘King’ P-22. They don’t seem very concerned that the proverbial kingdom of Griffith Park is much too small for a healthy adult mountain lion.

The P-22 obsession can’t be the reality we create and reinforce for our nation’s predators. We must respect them enough to not drown them in closeness and human affection. They don’t need us to cherish them or idolize them. What they need from us is simple: a little respect, lots of healthy habitat, and deterrence when they get too close to becoming problem animals.

If we can’t provide those things for wildlife without extreme anthropomorphizing, P-22 won’t be the last charismatic predator to meet an end like this one.