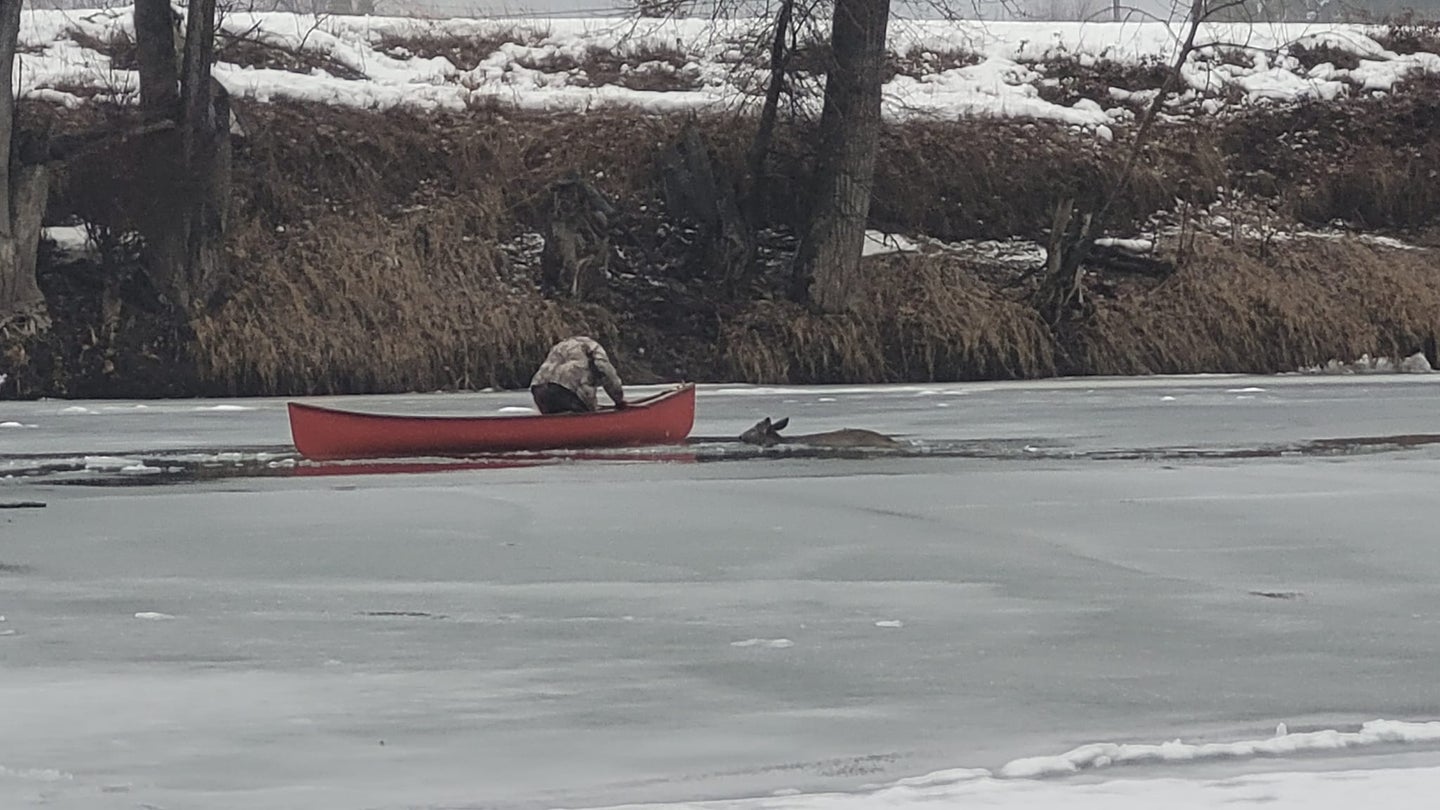 The longtime hunting guide used a canoe to tow the deer back to dry land. via Facebook
SHARE

Marty Thomas, a 63-year-old hunting guide, recently pulled off a daring rescue of a deer that was trapped in the frozen Kettle River outside Grand Forks, British Columbia. The deer, which wandered onto the ice and fell into the river, was first spotted by bystanders in the area.

“I got a phone call that a deer had gone through the ice, so I got my wife, Marlene, and my grandson to go down to see”, Thomas told Global News. “And there was the deer, which had broken through the ice.”

A few other individuals made prior attempts to rescue the deer before Thomas and his family arrived at the scene. After initial attempts to walk out to the deer were considered too dangerous, Thomas borrowed another onlooker’s canoe and decided to paddle out to the deer alone.

Marlene Thomas, Marty’s wife, captured the event in a video shared to the Friends of the Kettle River Facebook group later that afternoon. The event was a nerve-wracking experience, Thomas relayed to CBC News, saying, “my dad drowned. He fell out of a canoe 10 years ago”.

But Thomas explained that he wasn’t thinking about the past, as he was focused on saving the deer. Thomas was able to pull up beside the exhausted animal and place a rope around its neck, and then he towed the deer safely back to the shore.

“The deer was just in the water. And then I had to get the canoe up and around him into open water. And from there, I just towed him down an open passage.” Thomas said.

Thomas and several other individuals then pulled the deer out of the icy river and drove it to his local property, where they placed it in a heated cabin for a few hours. Eventually, Thomas and his wife moved the deer onto a small bed of hay on the porch and they covered it in blankets. When they came back at 4 a.m. the next morning, the deer was gone and had safely returned to the woods.

Read Next: Video: Alaska Snowmachiners Rescue Bull Moose That Fell Through the Ice

“I’ve been actually a hunting guide for 38 years and a taxidermist,” Thomas told CBC News. “It’s been my whole life. I make a living off of wildlife, and so to help, yeah, to give back like that was just, you know, it felt good.”