A Fitbit for Fish? Researchers Can Now Track How Many Calories Fish Burn 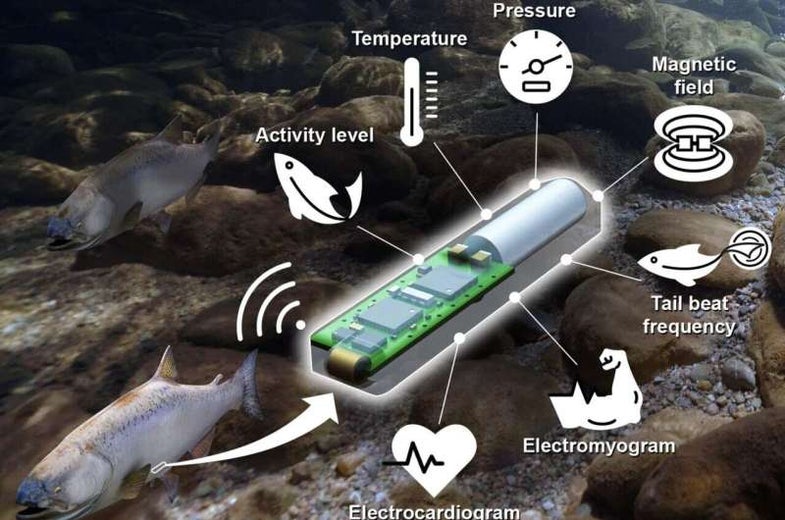 Learning what fish do and why they do it is the goal of this revolutionary research project. Lab on Fish illustration
SHARE

Wireless sensor implants are now telling scientists—in real time—about the behavior and health of wild fish. Lab-on-a-Fish, which is the first device of its kind that can reveal a suite of vital and environmental stats, has been in development for a decade, according to the Pacific Northwest National Laboratory. The device was born out of a need to ensure fish passage when developing hydropower projects. Now Lab-on-a-Fish helps researchers not only track fish passage, but how stressful that journey was for migrating fish—and where that stress occurred. The device has implications for everything from river restoration to managing species in the face of climate change.

“The Lab-on-a-Fish offers something needed in conservation and aquaculture—a cost-effective way to monitor fish health and behavior,” said Daniel Deng, a laboratory fellow and mechanical engineer at PNNL, whose sensor development team collaborated with a battery team at PNNL. “If we want to know what stresses a fish out, we need to use tracking data and link that with detailed environmental, health and behavior data.”

The small, lightweight device uses multiple sensors to wirelessly document all kinds of data for up to eight months. The sensors can simultaneously record heartbeat, tail movement, location, calories burned, water temperature, pressure, and magnetic fields. The unit’s biosensor is surgically inserted under a fish’s skin behind the dorsal fin. As the fish swims, a wireless receiver picks up the sensor’s signal providing data for scientists.

Deng and other researchers at PNNL had to develop a unit that is small enough to not affect a fish’s behavior or swimming ability, but large enough to carry enough sensors to track all the necessary data. Traditional fish tags have typically been too heavy to carry so many sensors, but Lab-on-a-Fish weighs just 2.4 grams and is about the size of a pen cap. So far the device has been successfully used on rainbow trout, white sturgeon, and walleyes, with other fish species and applications soon to follow.