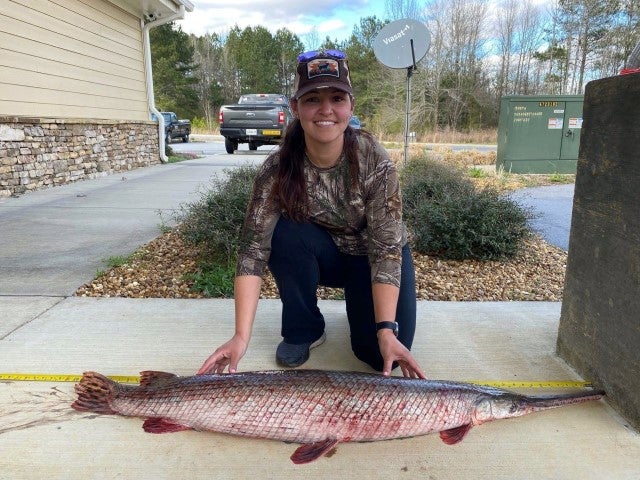 The Georgia Department of Natural Resources reports that Rachel Harrison caught a state-record longnose gar, weighing 31 pounds, 2 ounces. Harrison caught the gar while fishing with her husband Jason for white bass in the Coosa River near the town of Rome, Georgia, on March 19. Harrison’s fish tops the state longnose gar record previously held by Gerald Kennedy, who caught a 30-pound, 13-ounce fish from Lake Lanier in 2013.

Harrison’s big fish took a small 1/8-ounce jig intended for white bass, according to Georgia Outdoor News (GON). The Coosa River was running high and dark, and Harrison had caught only a couple white bass before she hooked into the big gar. She fought the fish on light spinning tackle and 8-pound test line.

While Harrison’s fish is a new Georgia record for longnose gar, her fish is also potentially a woman’s line-class world record for the species. Line testing, and other certifications with International Game Fish Association must be fulfilled, but her fish will crush the world record if it qualifies.

Even if Harrison’s 8-pound test line doesn’t “test true” at 8-pounds by IGFA, it likely would still qualify for one of the other higher line class categories listed.

Harrison isn’t the only Georgia angler to land a record fish recently. In February, a Georgia record hickory shad was caught in the Ogeechee River, and in December a state-record shoal bass was caught and released in the Chattahoochee River. Harrison’s gar is the state’s third record-sized fish caught in four months.