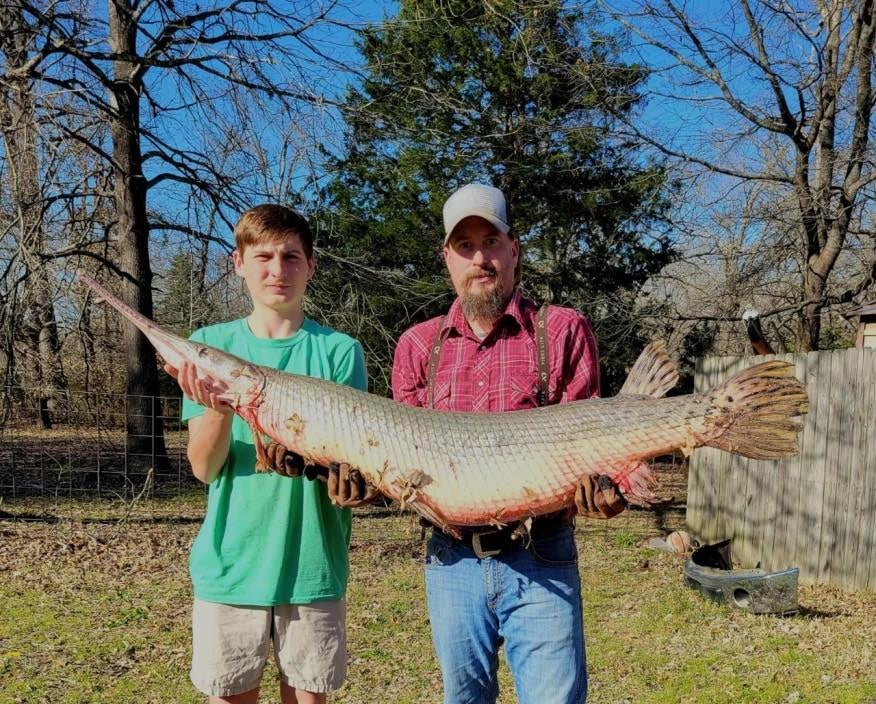 Jacob Fischer, 16, was bowfishing with his dad Ryan on the 25,500-acre Lake Palestine in East Texas last month when he shot the biggest fish of his life.

As they eased along in their boat, Jacob spotted a giant gar near the surface. He drew his recurve bow and released an arrow, anchoring it solidly in the heavy fish.

For 10 minutes the young man battled the massive gar with his bowfishing reel fitted to his recurve, giving and taking line, according to a report from KETK-TV.

But suddenly the fish got loose and disappeared back into the lake. The bowfishermen were crestfallen and headed home. But later that night, they returned to the same place where Jacob had lost the big gar, trying for the fish a second time.

“It was turning nighttime, and we headed back out because we didn’t want to miss an opportunity on this fish,” Jacob says in an interview with KETK.

They hadn’t been out long on their second trip to the lake when Jacob spotted the fish, and shot it again. Another epic battle between gar and young bowfisherman ensued.

“Awesome, awesome shot he made on the fish I didn’t even know he had shot it at first, I was in the back of the boat getting my equipment ready,” says Ryan.

This time they were able to fight the fish into the boat. The Fishers figured the giant fish was likely a Lake Palestine record for longnose gar, but they had no idea how truly huge the fish was until they later weighed and measured it.

On certified scales, the fish weighed 56.2 pounds, with a 63.5-inch length and 27-inch girth. This would make Jacob’s fish an official world bowfishing record for longnose gar, according to the Bowfishing Association of America.

Jacob’s gar not only tops the BAA records for the species, but it far exceeds the IGFA all-tackle world record for longnose gar, which is a 43-pounder from Texas’ Trinity River caught in May 2017 by angler Rock Shaw.

IGFA only counts rod-and-reel sporting catches, so Jacob’s gar isn’t eligible. But that doesn’t matter much to Jacob, who’s delighted with his world record bow gar.

“I was really excited, I didn’t expect it to be a record,” he says.