This Release Shield Calms Critters on My Traplines, and Helps Educate the Public 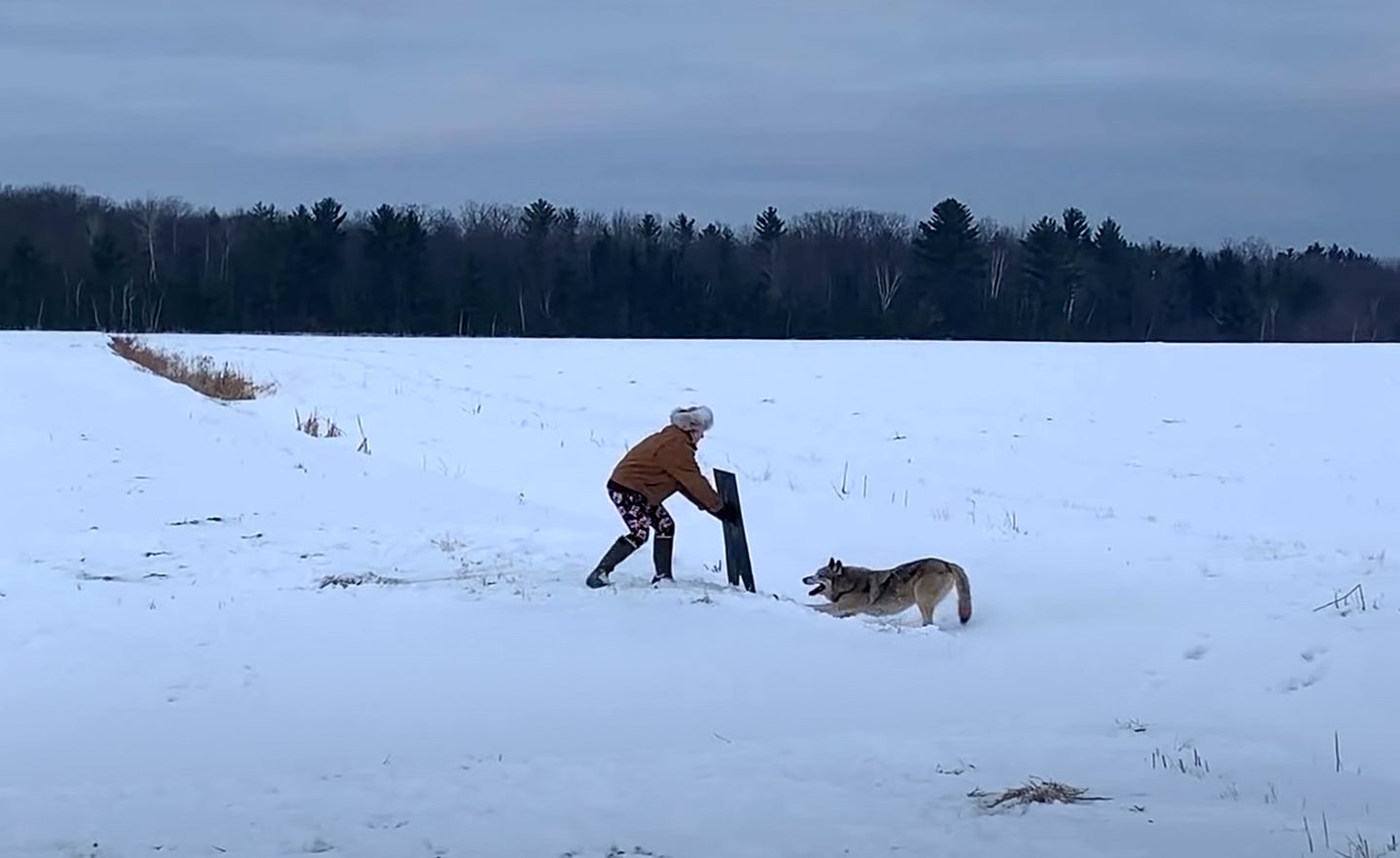 I’m not exactly a trend setter, but one thing I’ve become known for in recent years is releasing critters on my Wisconsin trapline. Wisconsin has a stringent tag system for furbearers like fisher and bobcat, plus our state mascot, the badger, is completely protected. Add in the strict regulations for the recently delisted gray wolf, and there’s a whole list of furbearers I have to release on a regular basis.

I’m a mom of two young kids, plus I work a full-time day job, so I generally check my traps when we’re on the way to school and work early in the mornings (sometimes in my pajamas). Because of our packed schedule, I have to be efficient when harvesting and releasing animals so I can remake my traps without making us late.

Over the years, I have tried every method of release known to trapping. I started using the typical “dogcatcher’s” catchpole for bobcats and fisher. But after I caught my first bear, I realized the value of a big sheet of plywood with a hole cut at the bottom to pull the trap through.

Read Next: Becoming a Trapper Will Make You a Better Hunter

In the following years, I started to get a little complacent, and I stopped bringing extra tools for releasing. Instead, I used whatever was in the back of my truck to cover the animal while I released the trap, such as plastic totes for bobcats and 5-gallon buckets for fisher and badger.

As I started running longer traplines, and the wolf population increased each year, I began catching more wolves in my coyote and fox sets—no matter how hard I tried to avoid them. Wolves aren’t afraid of anything, so if one commits to a set, there’s no keeping keep it out.

In a typical trapping season I catch, on average, four to five badgers, six to eight bobcats, and three to four wolves. I’ve now narrowed my release method down to a single tool, dubbed “the release shield.” It’s a 4-foot-tall piece of black plexiglass with cabinet handles screwed into the back and a V-notch cut in the bottom. This shield does just what its name implies: It shields me from the danger that is a trapped predator. Teeth, claws, and the sheer size of some aggressive animals makes releasing a dangerous endeavor for someone who isn’t experienced at it.

After trying and discarding nearly every release method known to man, I’ve noticed another useful benefit of the release shield. It calms the trapped critter so that I can easily pop the trap without the animal flailing around or getting aggressive.

In this video of a wolf release, you can see how the wolf is aggressively fighting the trap and myself as I approach. But as soon as the release shield is placed over its paw, and the animal is blind to the human behind the shield, its body language changes. The wolf relaxes, and simply waits there until something happens. With a catch-pole, the animal can see the human and the trap the entire time, and it’s stressed by the loop around its neck. With bobcats especially, the animal can even die if the loop becomes too constricted. But with the release shield, these problems are eliminated. From when I started recording this video until the wolf was back in the woods, you can see that the release was just over 4 minutes.

Read Next: Hunting for Meat Is Widely Accepted. Wearing Fur from the Predators You Hunt and Trap Should Be, Too

For years, trappers didn’t talk about trapping to non-trappers, let alone show a trapped animal in photos or on video. But legal traps are humane and designed to prevent injury in trapped animals. For instance, in the video above, I used a Bridger No. 2 dogless trap that was fully modified (offset and laminated). It had 8 feet of chain and in-line shock springs, which absorb energy to prevent should injury. There are extra swivels, too, so critters can turn freely. I’ve even put my own hand in the traps to show how they work humanely. Offset and laminated traps simply hold the animal in place, much like a pair of handcuffs, until the trapper can either harvest the critter or release it unharmed.

I truly believe it’s important and, in some ways, necessary to show the entire process of trapping for the public. If we hide parts of trapping that we think people can’t handle, then the antis will capitalize on that and allow their myths—“traps break bones” or “animals chew their legs off”—to take root. By showing videos of animals being held comfortably and managed within careful regulations, it’s my hope that trapping will be more acceptable by the general public for decades to come.