How to Hunt Fall Gobblers by Boat

Sneaking into the woods by way of water to hunt turkeys is a lot like slipping in the back door... 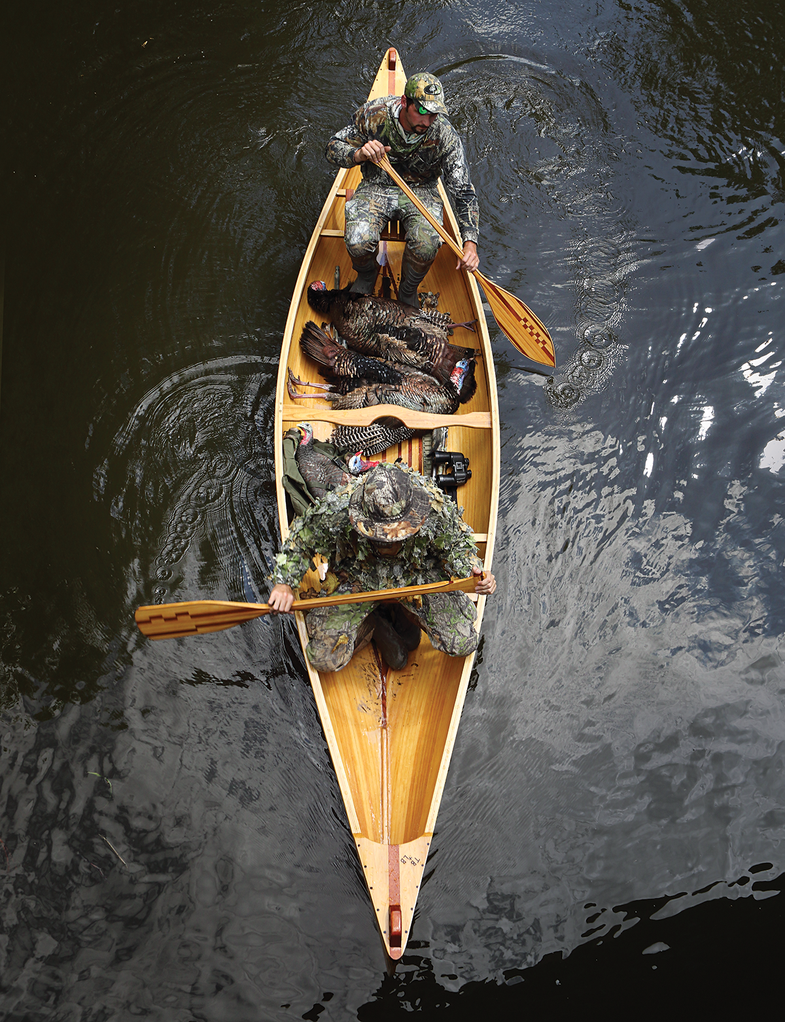 Sneaking into the woods by way of water to hunt turkeys is a lot like slipping in the back door after midnight—do it correctly and you won’t get caught. Turkeys are keenly aware of their surroundings, and they know where to expect danger to come from, and rarely is that from the water.

Across the country, large reservoirs and rivers with extensive shoreline comprise large expanses of public hunting ground. These are often hard to reach by way of land, leaving them devoid of hunters. With a little extra effort and a boat, you can secretly unlock the door to excellent turkey hunting.

Listen Up
There are plenty of ways to kill a fall gobbler, but busting up a flock and calling them back together is an exciting and proven tactic. First you need to find them, though, and scouting from a boat can be very effective. From the water, you can cover a lot of ground without having to step foot on it, and you can keep an eye or ear out for birds from the comfort of your seat as you cast for bass and crappies. Gobblers bunch up in the fall and spend most of their time feeding.

You need to be on the water at sunrise and sunset listening for turkeys coming off and going to roost. On a reservoir, slip to the back of a cove so you’ll be able to hear turkey activity on each of the opposite peninsulas or in the mainland woods. If the birds are there, you’ll be able to hear their powerful, heavy wing beats as they fly, especially since fall turkey flocks are generally large. They don’t gobble as much as they do in the spring, when they’re chasing hens, but they still use vocalizations. You’ll hear yelping, cutting, cackling, and even the occasional gobble. On a river, slowly cruise the bank back and forth along the timber you expect to hunt until you locate the birds.

The Big Bust
Once you’ve located a flock, you need to strategize the best way to break them up and bring them back together. If you’re hunting alone, the tactic is fairly simple: Sneak into striking distance of the flock and rush them. You can do this first thing in the morning by blowing them off the roost, or you can bust up a flock once they’ve hit the ground. Run right into the center of the flock. Bang sticks together, kick leaves, and wave your arms. Just make sure the birds scatter in many directions and don’t all fly or run off the same way.

If the flock is on a peninsula, rush the flock from the mainland side, so they’ll fly to the end of the peninsula and essentially corner themselves. Some might fly across the water, but assuming the land you’re hunting is large enough, most should stay on the peninsula. The next step is to sit down, wait just a few minutes, and start calling them back together.

If you’re hunting with partners when you locate gobblers on a peninsula, put hunters in the upper inside corners of where the peninsula meets the mainland and have one hunter bust the flock by rushing in from the end of the peninsula. The birds should scatter toward the hunters.

Hunting from a ground blind and using a couple of immature gobbler or jake decoys may not be necessary, but it sure can help when a forest full of eyes is bearing down on you. A blind that can be carried with backpack straps is perfect for numerous sets in a single day.

Gobblers talk to each other just like hens and poults, but they talk slower and deeper. They yelp, cluck, cutt, purr, and putt. You can bring a flock back together using any of these calls. Sometimes they won’t talk back, but that doesn’t mean they aren’t listening. Try whatever it takes to get a response, then match the live bird with the same calls of equal intensity. Keep your eyes open, because gobblers often show up without making a sound.

Equipment Checklist
—Boat: Canoe or kayak
—Gun: 12- or 20-gauge with super-tight choke
—Ammo: No. 5 or 6 long-range loads
—Decoys: Subordinate gobblers and jakes
—Calls: A variety of calls for yelps, cutts, clucks, and gobbles
—Boots: Rubber knee-highs for getting in and out of the boat