The .220 Swift was Frank Glaser's favorite rifle for all things except grizzly bears, but at times it had to handle them too 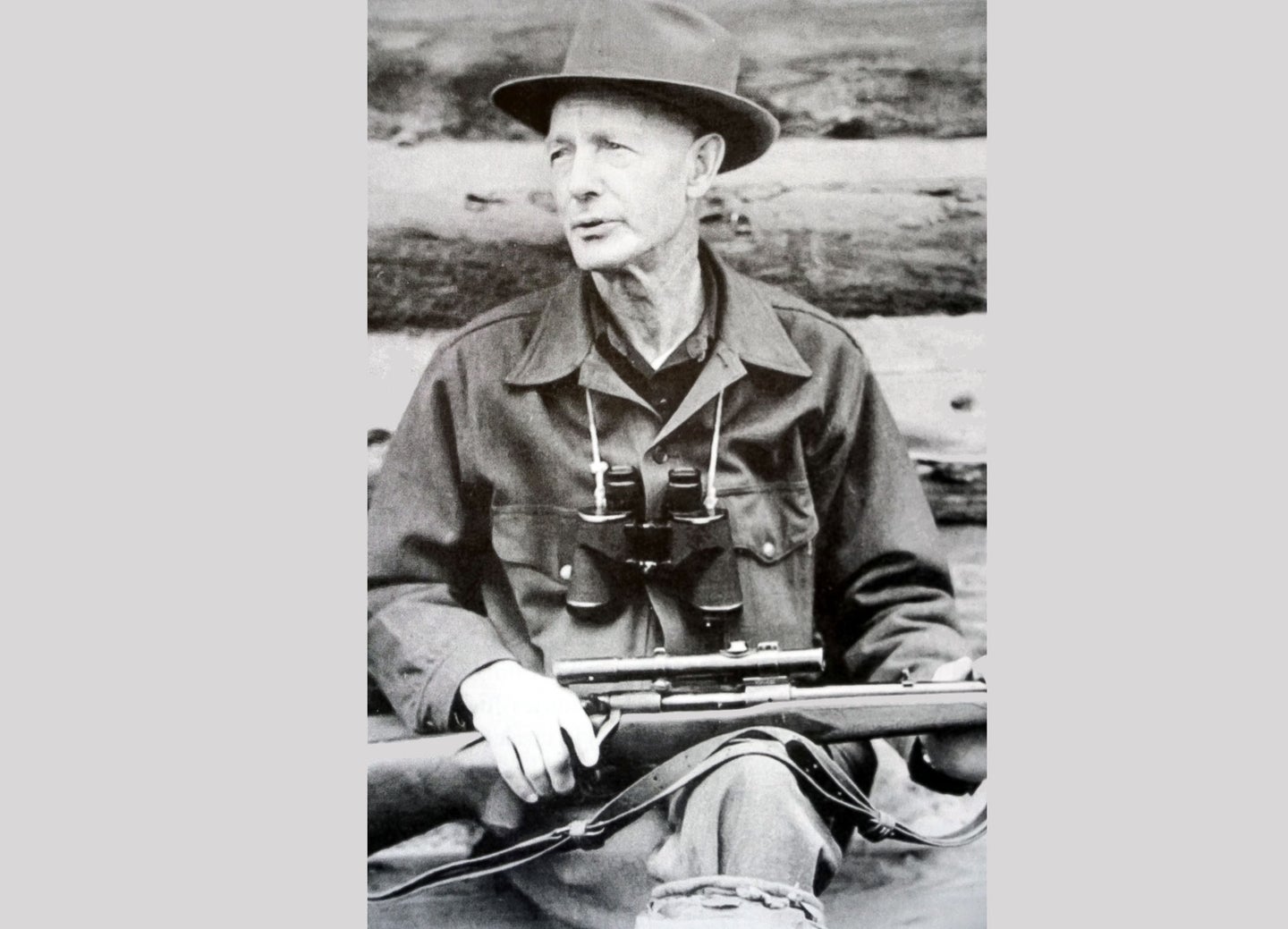 Shortly after arriving in Alaska, thirsty for adventure that I could have only dreamed of before, I devoured what published tales I could find from those who came before me. Alaska’s history is full of tough, savvy, and notable characters, but Frank Glaser stood out among all the rest. His 40 years of adventure in Alaska were immortalized in the pages of Outdoor Life through the writings of Jim Rearden, and later in the book Alaska’s Wolf Man. As he was described to Rearden shortly after their first meeting, Glaser was “an old timer that old timers respect.” He was a market hunter, wolf trapper, wildlife researcher, and expert outdoorsman (you can read more about that in my feature story on following the tracks of the Wolf Man).

What’s less-known about Glaser is that he was a big-time cartridge nerd. In the mid-to-late 1930s, he made so much money trapping fox in November that he bought every new rifle and cartridge that showed up at the sporting good’s store in Fairbanks. He put them to hard use too. His darling, however, was the .220 Swift.  In Glaser’s words, Rearden writes:

“In the late 1930s and into the 1940s I had a Winchester Model 70 .220 Swift, and killed everything with it—moose, grizzly bear, caribou, sheep. However, the little 48-grain bullet didn’t perform well on grizzlies. But with a lung shot on hoofed game the Swift killed quicker than any other gun I ever owned.”

Many of the same stories in Rearden’s 1998 book were first written in the pages of Outdoor Life in the mid 1950s. I thought it was worth resurrecting the following two Glaser stories because they’re iconic tales that haven’t been carried into the digital age, and also because it’s interesting to note that even back in the day, serious outdoorsmen were fascinated with pet cartridges like the .220 Swift. An epitaph to Glaser in the July 1975 issue of Outdoor Life included a close call that Glaser and his Swift shared with a grizzly bear. As detailed in the book, Glaser had been on a solo wolf control trip in the Alaska Range, hunting and trapping wolves:

“On September 23 I returned to where I had set some traps at the entrance of a ground squirrel’s hole high in a saddle in the sheep hills northwest of my cabin. One of my wolf traps was gone with its log toggle, which had been buried. I thought I had caught a wolf. The nearest willows were about a mile away, and I thought the wolf had gone down there with the trap and toggle. I expected to find him tangled among the willows.

I had the surprise of my life when a big sow grizzly burst out of the willows about 15 feet away. She was shaking her head, growling, and bounding toward me. I quickly fired my .220 Swift, hitting her in the body. The 48-grain bullet slowed her, but she kept coming. I backed up and shot again. She kept coming. The bear slowed with each shot as I continued to shoot, but she kept moving and kept absorbing bullets. After dodging the bear several times and doing a lot of leaping and shooting, I finally dropped the animal with my eleventh shot. It fell scarcely a rifle’s length away. I hated to shoot the old girl but had no choice.

The Swift is a good wolf rifle, and I was hunting wolves, not bears. I had been trying to avoid grizzlies. I had previously killed a couple of grizzlies with it but picked my shots carefully. Moose and caribou I killed with the Swift dropped quickly and a lung shot, especially, was lethal.

I sat on the bear and took a pinch of Copenhagen snuff to steady my nerves. After a time, when my heart had quit racing, I skinned the bear, then set some wolf traps around the carcass. Wolves love grizzly meat.”

Another tale involved a single wolf that had killed at least 52 reindeer while Glaser spent weeks trying to kill it. He considered it the only one he ever encountered that was superbly clever and on-par with some of the legendary livestock killers of the Old West. Wolves had been ravaging the reindeer herd near Teller, AK in the mid 1940’s, and Glaser had been able to put a serious dent in them using poison baits. However, he encountered the aftermath of a single wolf with a crippled foot that was too smart to fall for any of that. The wolf had the herders as spooked as it did the reindeer. It preferred to slip in and kill during the frequent heavy blizzards, then return safely to the mountains. His encounter is detailed in Chapter 28 of Alaska’s Wolf Man, titled “The Teller Wolf”:

“I stayed in the herder’s cabin near the reindeer herd and didn’t sleep well but lay awake off and on most of the night as the wind rocked the little hut. I suspected the lone wolf would kill again during the blizzard.

The wind let up somewhat toward morning, the sky partially cleared, and there was fair light from the moon. Well before dawn I decided to slip out to the herd to see if the wolf had been there, so I put on my reindeer parka and sealskin pants, got on my snowshoes and started off, my rifle over my shoulder.

The wind was still gusting. Sometimes wind-blown snow blotted out everything; other times it would die, and the moon gave enough light so I could see pretty well. As I neared the herd the wind picked up a bit. Through the blowing snow I saw a dark blob. It was just coming light, and as I got to the blob I saw it was a dead reindeer, still warm, its bloody stomach and entrails strung out behind it. Wolf tracks, still visible in the swirling snow, told me all I needed to know. The crippled wolf had killed again and it was somewhere near.

The wolf’s tracks went upwind, and I figured it was hunting for another reindeer. I unslung my .220 Swift and followed. The tracks were clear and fresh. I could see about 20 feet ahead through the flying storm. After a hundred yards of cautious walking, I found another dead reindeer, also still warm. The wolf had killed it moments earlier.

From that dead deer I followed the wolf tracks up a knoll, not even able to hear my snowshoes creak in the gusting wind and swirling snow. When I reached the top of the knoll, ahead of me perhaps 30 yards I saw a moving, dim shape. It stopped, apparently to stare at me, and then it moved again. It was too small to be a reindeer, but in the blowing snow I couldn’t see what it was.

As it started to disappear into the storm, I suddenly realized it had to be the lone wolf I was seeking. I pushed the safety off my rifle as I lifted it to my shoulder, then centered the scope on the vague, moving blur. I snapped a Hail Mary shot at the blur, knowing my chance of connecting was small.

The movement stopped, and the blur remained in one place as I ran toward it, working the bolt, hoping for another shot. It wasn’t needed. My first shot had connected, and the wolf lay dead before me.”

Glaser’s stories told by Rearden, and in Alaska’s Wolf Man, forever link Glaser and the .220 Swift, and elevate that cartridge to an almost mythic status. It’s interesting to me that many of the old timers like Glaser weren’t all that different from the diehard hunters of today. They had a passion for hunting, guns, and cartridges. They sought out the new and interesting, and put it to the test. Most importantly, they lived their own adventures, and their knowledge was based on real experience.