Stay Close to Home for Elk

Hunters ride horseback and drive far into the mountains in search of elk, while the elk are often close to home the whole time. 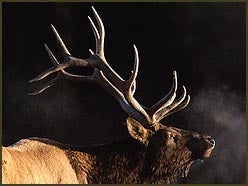 Last November the weather was so warm in Montana I hunted in shirtsleeves at 7,500 feet. The sunshine was nice, but elk hunting was the pits.

I parked off the highway and started up the hill in the gray dawn. Red squirrels chattered and a pileated woodpecker hammered at a stump, but no rutting bucks walked past my seat under a cottonwood tree. At mid-morning I began still-hunting through the thickets. I knelt on one knee to look ahead through the space between the tree branches and the ground. A bedded bull elk stared at me from 30 yards. It took my mind a moment to decide that it was an elk. Then I raised my rifle and finished the hunt.

As I sat admiring the bull, I noticed the quiet. Even with a main highway on the other side of the ridge I could hear the hush of birds hopping among the branches.

Any secluded niche that offers protection from the elements and hunters, with food and water nearby, is all an elk needs to wait out the hunting season. These pockets might be as close as the edge of town or the next ridge over from a road that leads into the mountains.

A study of elk movements during the fall in Montana’s Lolo National Forest concluded that some elk traveled over six miles back into the mountains the first days of the hunting season to escape hunters. Other elk, especially bulls, headed down in elevation to out-of-the-way places that had everything they needed. One bull tracked during the study spent the entire hunting season within a mile of a house. Another bull lay under cover next to a four-lane highway and watched hunters drive by.

The study found that elk rarely ventured into logged areas crisscrossed with roads open to vehicles. The typical fall range of the elk was in steep, unroaded country.

Further, almost all of the elk stayed in forested areas with thick canopy covers during hunting season. They preferred places with grass growing underneath the timber instead of shrubs under the trees.

Favorite places for bulls to hole up are the heads of drainages and near seeps and springs. A study of elk in the mountains above the Coeur d’Alene River in northern Idaho noted 95 percent of radio-collared elk stayed within 400 meters of water from early September to late December. The Idaho study showed that elk preferred sloping ridges and finger ridges for bedding spots, at least 400 meters from roads open to vehicles. The elk avoided dry hillsides with a southern exposure to the sun.

Bulls are most likely to seek such hideaways. By the end of the rut in mid-October the bulls are gaunt and beaten black and blue. To gain weight to face the coming winter, the bulls go off by themselves or in twos and threes and hide out to avoid the hustle and bustle of cows and calves and competition for food. The biggest bull I ever shot was bedded with three others on a steep face above a paved highway. I climbed into a bowl grown up in Douglas firs the size of Christmas trees. Elk tracks old and new crisscrossed the couple of inches of snow.

I tried following a fresh set but lost it in the jumble of tracks. I slowly walked along a game trail off the crest of a finger ridge. Across a swale, a bull stood up from his bed in the deadfall and short firs. He had seen my movement, but had not heard or smelled anything to confirm his suspicion. I found the yellow hide behind his shoulder through my scope. The elk turned his head and a sweep of antlers followed. The scope’s crosshairs wavered, then settled on the chest of the bull. At the shot, he fell.

I have jumped elk out of that hideaway two times since. Then again, I have hunted it a dozen times without seeing so much as a track.

** Rooting Them Out**
The usual drill to locate elk is to glass the edges of an opening early and late in the day when elk are typically out feeding. Elk close to civilization, however, most likely venture into the open only after dark.

The only solution for bulls that remain under cover during the day is to root them out. That’s easy to say, but the elk’s only real defense against a hunter is big country. Topographical maps help whittle down the search. The veins and tufts of grass marked in blue on topo maps show the creeks, springs and bogs elk favor during the dry part of fall. In addition, look for roadless, natural barriers such as steep ridges, deep canyons or thick forests that are likely to keep out most human intruders.

Even by pinpointing likely habitat, the only way to determine if your hunches are correct is to shoulder a daypack and start hiking. Keeping to the ridgetops and hiking across the heads of drainages irons out some of the ups and downs. Still, climbing across elk country is strenuous exercise even for hunters in good physical shape.

Keep up the pace until fresh tracks and droppings are found and the barnyard musk of elk comes to your nose. Then slow to a crawl. Without snow to record tracks, move into the wind to check the dark holes in thickets and the narrow ledges and finger ridges where bulls like to bed. Elk choose these places because cracking branches underfoot in thick cover and swirling winds help alert them to possible danger. When you find a place where a bull has been hiding, sign will be abundant in a small area.

A bull bedded in a thicket behaves like a whitetail buck. An elk that thinks he’s still hidden will let a hunter walk past. You almost have to step on the elk to kick it out of its bed. So search every bit of ground, because even the screen of a couple of deadfall logs can hide a 700-pound bull.

Snow is a blessing to the hunter searching for hidden elk. Snow records tracks that lead to elk and deadens the sound of your approach. Even so, a mature bull is constantly wary and often beds where he can watch the approaches from above. With that in mind, shadow the track from the uphill and downwind side, jumping ahead to spots where the elk is likely to bed for the day.

Don’t give up even when a bull tears out of a thicket without the chance for a shot. His security, like a whitetail’s, is cover. If the elk hasn’t been thoroughly spooked he will stop after a hundred yards or so and watch for the danger to follow. He will pick a vantage point where he’s well concealed, with only his eyes peeking over the crest of a ridge or from cover on the far side of an opening. The chances of getting the drop on him are slim, but still worth the effort.

I shot a five-point bull two years ago on a morning after a fresh snow. I cut three sets of big tracks that led into a hole of short spruce and fallen lodgepole pines. Old beds were here and there in the thickest cover. In the space of 50 yards, the tracks split off. I stayed above the highest track that led onto a ledge, which was the only level ground. I stopped and looked ahead.

An off-color branch below caught my eye. The branch swiveled and turned into the antler of a bull facing me. I raised my rifle and placed the crosshairs on the junction of the bull’s neck and brisket. At the shot, the bull slouched over in his bed, his neck and legs stretched out in the posture of dead game. The other two bulls burst out of the cover and tore through the trees, running for a quieter place to hide.