Is a Bipod Really Worth It for Mountain Hunting?

In a game of counting ounces, does it really pay to pack a bipod up the mountain? Our expert weighs in 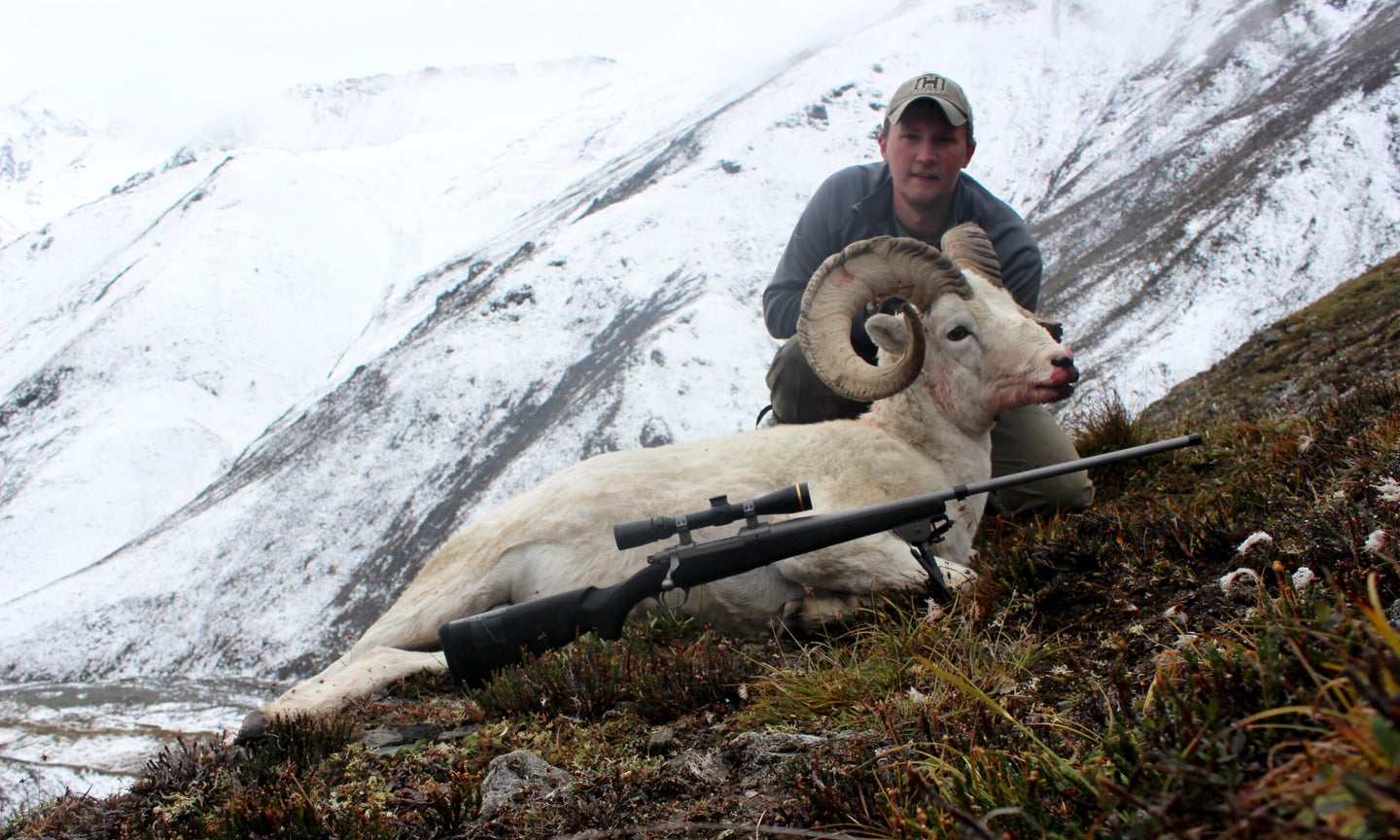 A bipod is a great shooting aid, but is it worth packing into the mountains?. Tyler Freel
SHARE

Shooting aids like bipods undeniably help a hunter build a more solid shooting position when they can be used, but are they really worth the weight in the mountains? I’ve hunted Dall sheep for many years, and there is a dichotomy that each mountain hunter must constantly reconcile—between helpful gear and the weight of that gear. A hunter must select gear that will help them be effective in the field, but also keep their backpack from becoming cripplingly heavy.

If there is a word or theme that represents the entire genre of mountain hunting—think sheep and goats—it’s “ultralight.” High-country hunters often must carry everything on their backs for miles over rough terrain. Even then, this is typically just the beginning. On many sheep hunts, I’ve had to hike for two whole days just to get to where I want to start hunting. Everything you need must go with you. Your rifle and hunting gear, as well as camping equipment and food. If you’re lucky, you’ll have to add even more weight for the trip out. Do that, and you’ll quickly discover why hunters talk about cutting the handles off their toothbrushes.

There are certain pieces of gear that are non-negotiable, and sometimes those aren’t the lightest items. Things like spotting scopes, tripods, shelters, sleep systems, and rifles eat up a lot of your weight allowance. With something like a tripod, you can choose an ultra-minimalist design like the Red Mountain Gear Vari-Leg system—which is truly ultralight—but it won’t be as convenient or forgiving as a heavier tripod. For each piece of gear, you must decide if it’s worth the weight.

A bipod is arguably optional for mountain hunting. Minimalist mountain hunters usually won’t bring one—but does the bipod’s weight penalty truly outweigh the benefits? Traditional wisdom dictates that a sheep or goat hunter should just use their pack or pack frame for a shooting rest. It often works well enough, but is “good enough” the best we can do? Usually, no.

The biggest downside in bringing a bipod or other dedicated shooting aid is that you might carry it all over the map, only to never use it. That can certainly happen, but when you do get a chance to deploy it, you’ll have a steadier, more-confident rest than a backpack. Don’t get me wrong: There are lots of situations in which resting your rifle on a backpack will still result in a successful shot. But stability and confidence are priceless on the mountain.

How likely are you to use a bipod in the mountains? Well, in almost 20 years of sheep hunting, I’ve killed 14 rams—seven of them with the aid of a bipod. I’ve also killed all three of my mountain goats using a bipod. Additionally, I’ve killed three rams while resting my rifle directly on a rock, two from improvised positions (sitting), one using a tripod as a rest, and only one while resting on a backpack. In alpine country, the odds are that you’ll be able to use a bipod when a shot presents itself.

Just like every other facet of mountain hunting gear, there is a spectrum of good bipods on the market. Each design presents its own advantages and drawbacks. A bipod is a specialized piece of gear, intended to shine in a single moment of the hunt. Look for a bipod that balances weight, stability, and ease-of-use.

Leading the pack of ultralight, mountain-minded bipods is Spartan Precision Equipment’s Pro Hunt TAC bipod. The Pro Hunt Tac has spring-loaded adjustable and interchangeable carbon-fiber legs. It features cant and traverse functions, which add to its versatility. Even better, mine weighs only 7.6 ounces. More minimalist versions like the Javelin Lite or standard Javelin bipods are similar, great options.

Spartan Precision Equipment brought them onto the scene a few years back and found favor with mountain hunters instantly. The bipods are simple and feature carbon-fiber legs, carbide cleats on the end, and a magnetic mounting system that allows the user to carry the bipod in a pocket or pouch, then instantly snap it into the receiver on the stock of the rifle. Standard bipod receivers are externally installed, and permanent sockets can be installed by a gunsmith.

These bipods have been riding in my cargo pocket for a few years now, and I have no plans to switch. They provide a good balance of minimalism and performance.

If any bipod is a control group, or point of reference, it’s a Harris. Simple, proven, and effective, the Harris HBRM1A2 and similar models set the standard for affordable, dependable bipods. I used a Harris bipod on my sheep rifle for many years. Initially I carried the bipod on the rifle for the whole hunt, but began carrying it in my backpack, installing it only when I was on a stalk—which worked well.

The Harris that I carried on many sheep hunts weighs 11.3 ounces and has legs that adjust from 6 to 12 inches. The legs are smooth, independently adjustable, and lockable by extending and tightening a set screw knob that’s on each leg. The Harris bipods are rugged and dependable, but you’ll probably want to hose them down with WD-40 if you don’t like rusty patinas.

Magpul introduced their own bipod not long ago, and the Magpul bipod is rugged and easy to use. It’s a streamlined bipod made of aluminum and injection-molded polymer. There’s a couple of different models that allow for either sling swivel stud or rail mounting. They’re also compatible with most Atlas bipod feet.

Magpul’s bipod is sturdy and simple to attach to the rifle and operate. It’s easy to pull the legs open to the locked position, and a push-button allows you fold them up. Both legs are adjustable in length from 7 1/4 to 10 ½ inches. The legs are notched and adjustable for length by pressing a button and pulling the leg out to the desired position—where it will snap securely into the desired notch. It’s very comfortable to load into and shoot from.

My Magpul bipod weighs 13.1 ounces, but I would trust it on even a heavy rifle. Magpul’s newer polymer MOE bipod forgoes the aluminum and weighs just over 8 ounces. Magpul’s website claims it to be the strongest bipod in their lineup, and it’s very affordable at $72. I haven’t used one yet (my experience is with the aluminum/polymer models), but at that price, it’s certainly worth a shot for even the skeptical mountain hunter.

In certain circumstances, a small shooting bag like the Pint-Sized Game Changer filled with Git-Lite could be a realistic and worthwhile shooting aid to pack into the mountains—even in lieu of a bipod. Full disclosure—I have yet to pack one on a sheep hunt, but I’m sold on their merits.

Outdoor Life Shooting Editor John B. Snow has extensive field-shooting experience with game changer bags and lists them as his favorite field accuracy aid. They can be set on tripods, or any other surface to improve your position’s stability. It’s something else you have to carry, but what’s a solid, confident position worth to you? You can cut the weight of these bags with Git-Lite fill, and maybe it can double as support under the coat you’re using for a pillow—which is one more use than a bipod will provide.

Read Next: Best Budget Hunting Rifles, Put to the Test

When considering a shooting bag, many hunters will likely gravitate back to the default “backpack rest.” However, a small bag would be much more versatile as a shooting aid. Looking at my own statistics over the years, I’ve shot three rams resting my rifle directly on a rock, and another off a tripod—all four shooting positions would have been dramatically improved by using a small shooting bag. As I mentioned earlier, in nearly 20 years of doing it, I’ve only killed one ram using a backpack as a rest.

Ultimately each hunter must decide what will work best for them, but I believe that bringing a bipod, bag, or other specific shooting rest—and the stability and confidence it brings—is worth the weight. It’s your job to demarcate the boundary between useful and excessive and decide what tools will benefit you the most.

The moment of the shot is just a sliver of everything that goes into a mountain hunt, but one that all your efforts rest upon. When you’ve done all the work to put yourself in position for a shot, you owe it to yourself and your quarry to bring what you need to make that shot with confidence.