The Spartan Precision Ascent Tripod is packed with features. It even doubles as a pair of trekking poles 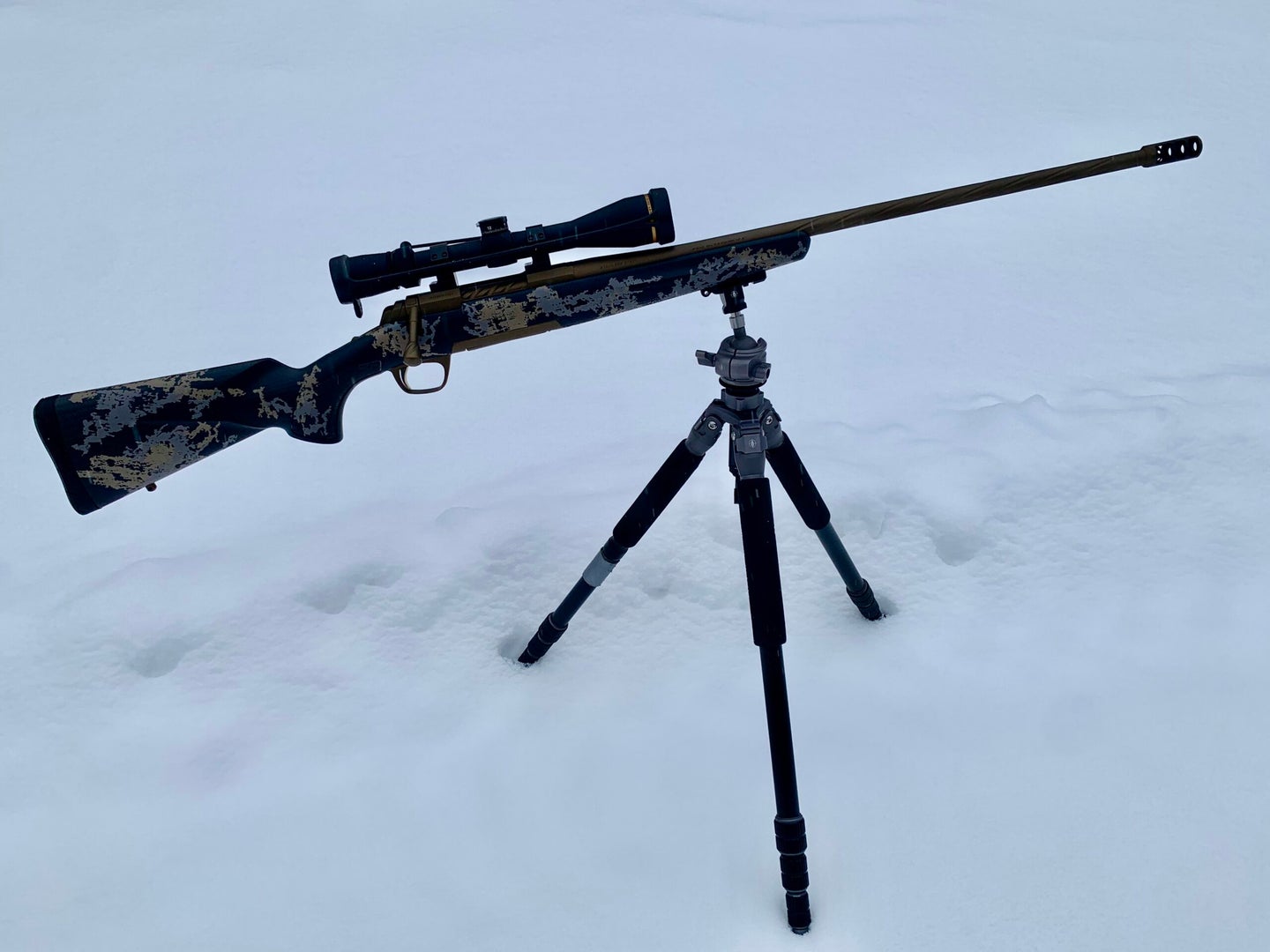 The Ascent Tripod is a high-quality and versatile shooting and glassing platform. Tyler Freel
SHARE

After bursting onto the ultralight hunting gear scene a few years back with their Javelin bipod, Spartan Precision Equipment has rapidly expanded and evolved their products. Starting with ultralight bipods that featured carbon-fiber legs and a proprietary magnetic socket attachment system, they quickly gained popularity and added tripods to their lineup. They started with the Sentinel Tripod, and most recently introduced their next iteration, the Ascent Tripod.

Good tripods range in price from expensive to outrageous, but depending on your application, they can be worth every penny. Some of this value can only be determined through time afield, and after getting ahold of an Ascent last summer, I was eager to see how it would perform when put through the ringer of a fall hunting season in Alaska.

Spartan Precision hangs their hat on high-quality materials and useful, smart designs, so the Ascent had a lot to live up to. The tripod might blend into the crowd at first glance, but look closely and you’ll see that it’s packed with features that set it apart. It features twist-lock extending legs and 4-position pitch adjustment for setting up on uneven ground or positioning it very low to the ground for stability. Each leg is tipped with a replaceable tungsten-carbide point and covered with a removable rubber cap. The tripod features a short center-column that is adjustable for height and has a weight hook at the bottom for added stability. The Davros Pro ball head is where the tripod visually begins to break from the crowd. It’s a fine-tunable ball head utilizing a proprietary magnetic stud that is compatible with the Spartan rifle and optics mounts. The stud fits into a small socket on your rifle or optic, allowing secure and quick attachment and release.

This tripod uses high-quality aluminum, carbon fiber, polymer, and precision-machined components that are all good initial indicators of a quality product. Going into the season, I couldn’t find anything that was cause for concern.

As a sheep hunter, I have a great appreciation for equipment that is useful in many ways and applications. Backpack hunting is often a game of compromise between considerations like weight, cost, durability, and usefulness. I carry everything I need on my back, so multi-use items are extremely valuable to me. The flip side of multi-use items is that they can sometimes do many jobs, but perform none of them very well. Over the past few months, however, the Ascent Tripod has really shown its versatility for my style of hunting.

One of the Ascent’s most-advertised features is that the legs can be unscrewed and used as trekking poles. Spartan even sells trekking pole heads with straps for added comfort. My first inclination is to question the durability of the legs as trekking poles. In the course of 18 years of sheep hunting, I’ve become sure of two things. First, on a backpack hunt, a stable tripod for glassing is a must. Second, trekking poles break. I’ve broken multiple sets of trekking poles and if I break one or more of these, not only do I not have trekking poles, but I might not have a functional tripod either. If I couldn’t trust these legs to use as trekking poles, that function would be pointless.

Fortunately, these tripod legs proved to be as tough as advertised. They’re heavier than your average carbon trekking pole, and I’d say much more durable. In fact, there were several instances that I was shocked they didn’t break. Sometimes a pole will get stuck between rocks, or you’ll lose your footing, putting all your weight on the pole. Despite my misgivings, everything held up beautifully. Being able to use the legs as reliable trekking poles adds value to the system and can even help distribute gear between hunting partners. In the case that a component does somehow break, the legs are field-strippable, somewhat repairable, and you can still use them (albeit in a shorter configuration).

A big advantage this tripod brings to the table is its ability to seamlessly transition between a glassing and shooting support platform. As mentioned, the Davros Pro and Davros are both ball heads built around Spartan Precision’s unique magnetic stud/socket mounting system first used on their bipods. The socket is simply slid over the stud, and the magnet keeps it from falling out. It’s secure enough that a rifle can be fully supported by the tripod, yet easily removed. Similar socket-style optics mounts are lightweight and easily attached to spotting scopes or binocular adapters.

As a shooting platform, the tripod in itself isn’t the most universally stable setup available. Heavy-duty tripods with saddle/clamp style mounts have an advantage in precision shooting—but they often aren’t ones you want to pack very far. Many of these tripods are used to clamp the rifle at a good balance point, which is often farther to the rear than the front sling-stud hole (which is where most people will mount the Spartan adapters). If you want to customize your rifle, however, Spartan makes a “gunsmith adapter” that is recessed and bedded into the stock itself and can often be installed closer to the balance point of a given rifle.

Another advantage is that the Ascent can be used as a tall bipod by removing one leg. In that case, a shooter could potentially use the third leg as a rear support if the situation allows. Overall, the Ascent is a great all-around shooting-support platform across a wide variety of situations. Last year, I shot my moose while I was standing, using the same system atop the Sentinel Tripod, and my wife and I recently shot two winter caribou from a seated position, quickly switching the tripod between our rifles. You can find Spartan adapters for just about any common rail or attachment system, and you can even swap the ball head out for a clamp-style tripod head if you want.

For glassing, this tripod also represents versatility and compromise. The Spartan ball heads aren’t what most people would pick as a dedicated glassing setup. Ball heads in general can be somewhat finicky compared to a quality, smooth panhead. But I had no trouble or real complaints when glassing rams with my spotting scope. The Davros Pro head is heavier but certainly more fine-tunable for precise glassing than the simpler Davros. I used the Heavy Duty Optics Adapter, which is still pretty slim. Attached to the bottom of my spotting scope, it slides over the stud and a snap-lock secures it.

The Ascent tripod is pretty thoroughly thought-out in terms of various applications and maximizing use, and this includes a small tool kit inside the center column of the tripod. The column tube is easily removed, and the bottom unscrews to access a set of the various bits you might need to adjust or maintain the tripod and other equipment. If you quickly remove the tripod head, the threaded stud atop the center column holds a bit, with the whole center column acting as a driver handle.

Where the Ascent Tripod Is Lacking

The Ascent is certainly a jack-of-all-trades, but it doesn’t really dominate in any single task. If you’re looking for a dedicated precision shooting tripod, or a setup specifically for photography or glassing with binoculars or a spotting scope, there are better options out there, especially considering the price.

What the Ascent Tripod Does Well

The advantage of the Ascent is that although it might not be the best tripod package out there for a single task, it’s a durable, high-quality product that does a lot of things exceedingly well. Its versatility makes it a one-stop-shop for most folks who only want to invest in one quality tripod.

Final Thoughts on the Ascent Tripod

I’m often disappointed by multi-use gear that doesn’t just stick to what its good at, but not in this case. I hauled the Ascent through the alders and mountains of Alaska hunting Dall sheep and caribou, through elk country in New Mexico, and used it to glass herds of aoudad in West Texas. I’ve been nothing but impressed. The Ascent is a solid tripod, and considering that I already use the Spartan bipods, it’s a natural fit and provides added flexibility as a shooting support in the field. A thousand bucks for a tripod is a lot of coin, but all good tripods are expensive. I think that the quality this system brings to the table is worth it. The package as-is works well, but the ability to use different tripod heads adds even more value. As an alternative, you can get the Spartan Davros head and use it on a tripod you might already have, but the whole Ascent Tripod package is a solid system that you’ll be able to depend on.