The FX Maverick has benchrest competiton accuracy in a hunting platform 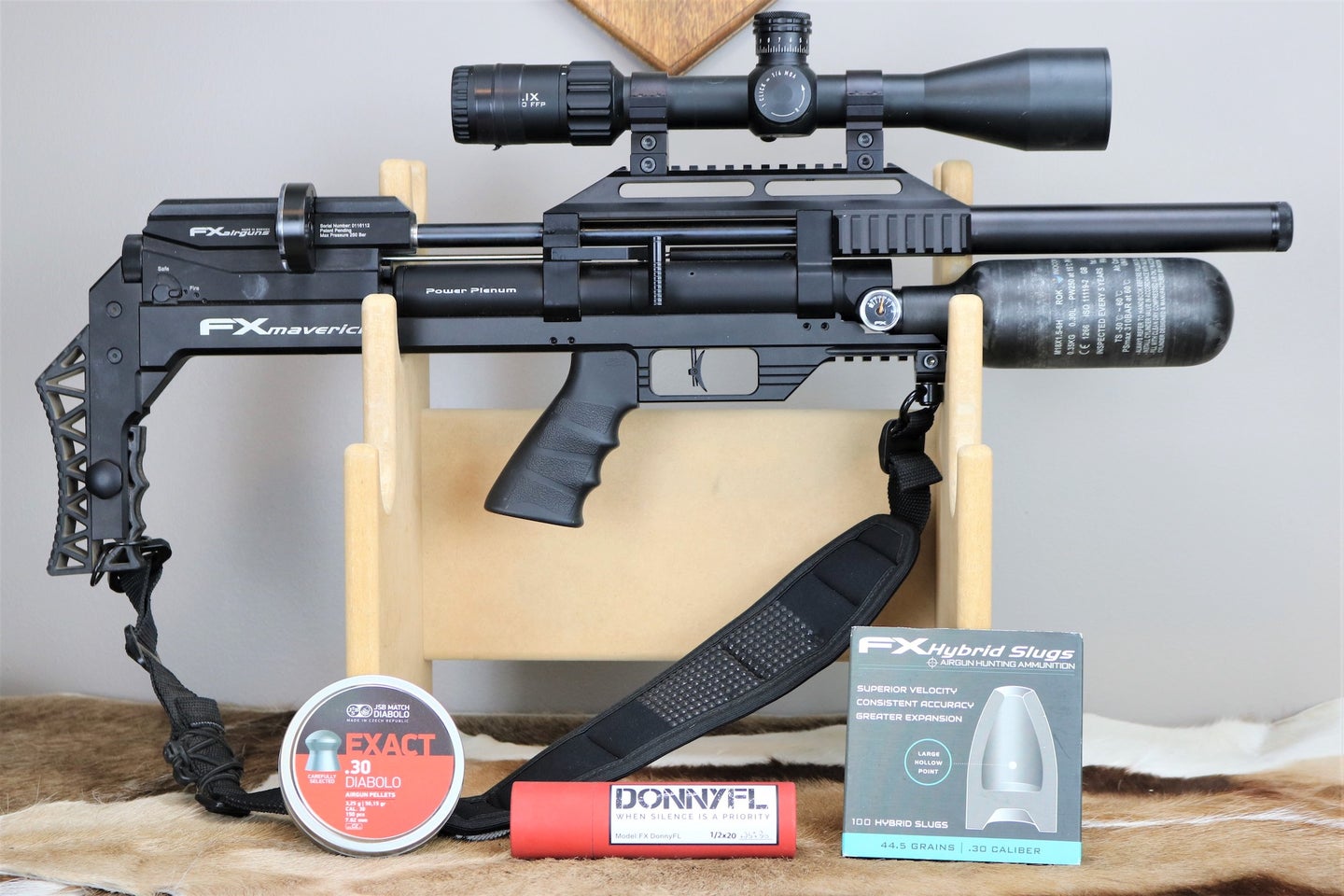 I tested the FX Maverick on everything from small game to small feral pigs. And while this bullpup is a deadly and accurate hunting air rifle, it also surprised me by how well it performed at the range. Out of the box, this gun is accurate, and it doesn’t require much tuning but still has the capability to do so. It’s not as adjustable as other FX models, but the Maverick utilizes two dual AMP regulators, which allows for more consistent accurate shots. This means you can feel confident shooting this airgun in the field or on the bench. So, if you’ve been looking for one that excels at both, then the FX Maverick merits serious consideration—especially for shooting slugs. It’s just that good.

The FX Maverick is a bullpup configured precharged pneumatic airgun, available in several calibers. The stock is based on an aluminum frame with a tactical design that accepts several standard third-party components, which allows for further customization. There’s a Picatinny scope rail and another mounted between the trigger assembly and the air bottle for mounting a bipod or other accessories.

One feature on the Maverick that stands out is the two adjustable AMP regulators that work in tandem. The first regulates the air delivered to the second regulator, which improves consistency. It depends on the configuration, but one option includes the 98-cc Power Plenum, which allows an even higher energy output, and this gun works particularly well with the FX Hybrid Slug. The use of the FX Superior STX Standard Liner in the shrouded barrel facilitates a high degree of intrinsic accuracy, and along with the ergonomic stock design and the adjustable match grade FX trigger, helps the shooter maximize the gun’s potentials.

While not as adjustable as the FX Impact, the Maverick utilizes an easily accessible power adjuster that’s situated behind the breech that the FX Wildcat MKIII utilizes. This is coupled with an adjustable hammer that allows you to easily dial in the gun. You can then adjust the Dual AMP Regulators for the various caliber options or to optimize performance for a specific projectile.

The tactile cocking handle and buttery smooth sidelever action permits rapid follow up shots when needed. And the positioning of the sidelever makes this possible without breaking your cheekweld. You can also set the adjustable match grade trigger at a low weight that’ll break like a glass rod, and the ergonomic post and blade configuration provide excellent contact for the finger pad.

Testing the FX Maverick in the Field

I’ve been shooting the FX Maverick for over a year and have taken it on many hunting trips ranging from rabbits to (small) feral hogs and have a great deal of confidence in it as a field gun. Recently, I sat down at the bench with howling North Texas winds and shot a few groups before heading out on a hog hunt. I decided to shoot the FX Hybrid Slugs, a purpose-designed airgun slug. I believed they would perform well enough to penetrate the thick skull of a hog and suspected they might be more stable in high winds.

After re-zeroing the gun, I noticed that the POI (point of impact) of the slugs sat about two inches from the JSB Exact pellets’ POI. I put a 10-shot string across the chronograph and averaged 840 fps with an 8-fps variation for a power output of approximately 70 ft-lb. This is excellent consistency, which contributed to accurate shooting, and allowed me to put five slugs into a one-inch group at 50 yards in high winds.

In the field, I had the opportunity to drop the crosshairs on a 30-pound pig early one morning. At 45 yards, I aimed just behind the ear and let the pellet fly. On impact, the hog dropped like the proverbial brick and didn’t move. This gun is a proven shooter in the field and at the range.

What the FX Maverick Does Worst

This is still an expensive rifle, so you’ll have to lay down a significant chunk of change to own one. And once you’re in this price strata, it’s worth the extra couple hundred bucks to invest in the Impact. If you really want the adjustability of the Impact and plan to focus on competitive shooting, it’s the better option. Even though the FX Maverick is easier to set up than the Impact, if you start to fiddle with the settings a certain amount of finesse is required to keep the two regulators in balance.

While I’m just nit-picking at this point, I wish the safety was further forward. Everything else on this gun has an ergonomic design, so it bugs me to reach back into a blind spot to operate the safety lever. Still, this isn’t a major issue, and I had to stretch to find something I’d change about this gun.

What the FX Maverick Does Best

This is a high-performance rig for those that want to shoot rather than tinker. What I mean is that it performs well out of the box in several applications, and you don’t have to spend time tweaking it to perfection. At the same time, you can fine-tune it within limits. However, if you’re a benchrest shooter that weighs and resizes your pellets, times your shots, and sets up wind indicators along the shooting lanes, you might prefer the Impact over the Maverick. But if you want to grab the gun and go hunting, and maybe shoot a competition now and again, the Maverick is the way to go.

In my experience the FX Maverick excels as a small game gun but has the shoulders to lean into longer shots and bigger quarry when necessary. It’s compact and ergonomic, which makes it easy to carry and deploy even in tight shooting spaces. But it also has the accuracy for competitive shooting if you decide to test your marksmanship that way.

Final Thoughts on the FX Maverick

The FX Maverick has just about everything you want in an ergonomic and extremely accurate bullpup. While it’s expensive, the gun does have the ability to add additional calibers, specialty barrels, and third-party components, which might negate the need to buy multiple guns and save you money in the long run. I think that If I was limited to one gun, the Maverick would make my short list.