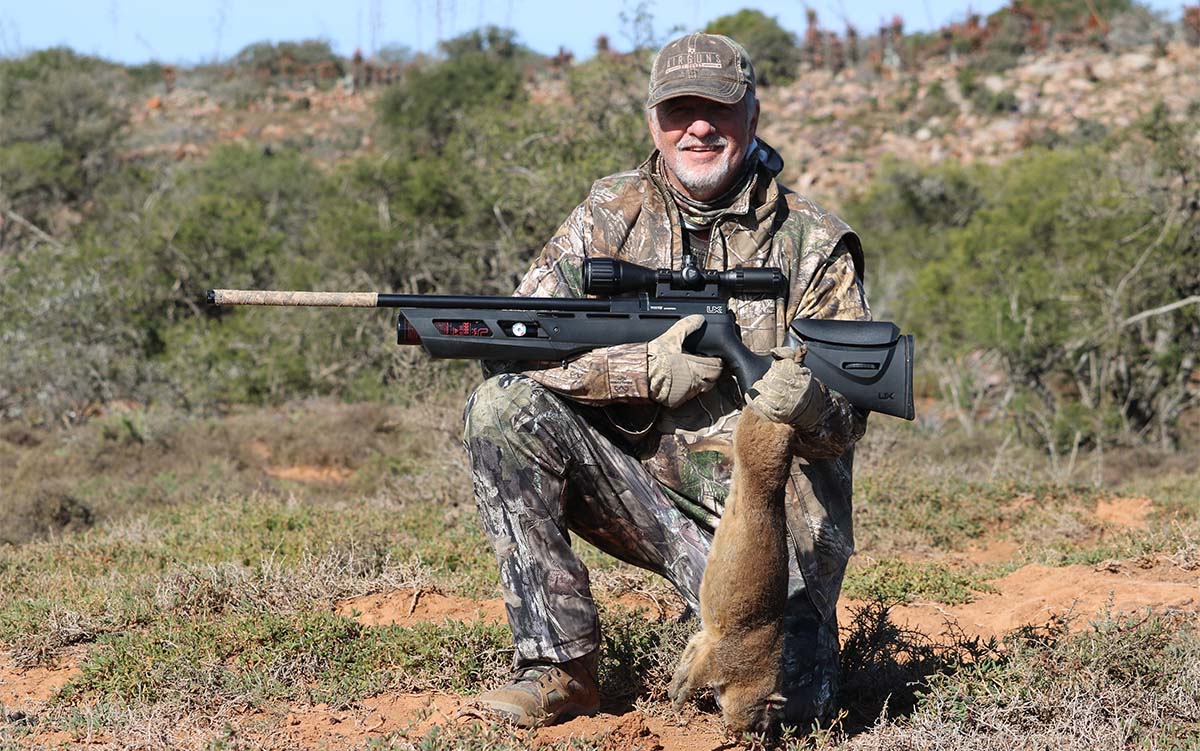 If you asked the typical firearm hunter about airguns a decade ago, they would probably think about the low power guns most hunters cut their teeth on. But in recent years there has been a growing awareness of the effectiveness of air powered rifles and their potential to provide expanded hunting opportunities. The market for adult oriented airguns has seen explosive growth, with many states expanding their hunting regulations to permit air rifles as a method of legally harvesting wild game.

But price has been an entry barrier for quality airguns. However, In recent years several companies have addressed this situation by offering more budget friendly models in their lineups. The quality budget-oriented airguns can be hit or miss, and even the better built guns in this price range are sometimes sparse when it comes to features. Manufacturers often sacrifice features such as multi-shot magazines, integrated shrouded barrels, a regulated air management system, or adjustable stocks to reduce costs.

Except for Umarex. They’ve released two air rifles in this price point without compromising the quality, performance, or features found in higher priced options. The first rifle is the standard Gauntlet, followed by the recently released Gauntlet 2.

An aspect of both the standard Gauntlet and the Gauntlet 2 (G-2) rifles that really stands out is the rich feature set these rifles offer. There are differences between the two versions, so I’ll speak in general terms that relate to both versions.

Both models of the Gauntlet are regulated, which means that a mechanism is designed into the rifle to standardize the volume and pressure of air used for each shot. This results in a shot-to-shot consistency that is very difficult to achieve in an unregulated gun. Without a regulator, the pressure drops, and air volume is reduced with subsequent shots as the air is expended. A regulated gun will maintain the same point of impact from the first to last pellet on a fill, so the shooter will not have to correct for variation while shooting.

Both versions of the Gauntlet offer a relatively high shot count depending on the caliber of the gun. The standard Gauntlet in .25 will generate about 30 shots per fill, and the Gauntlet 2 will provide about 65 shots per fill. This is because the Gauntlet 2 uses a higher fill pressure with a larger volume tank. The larger 24-cubic inch volume air tank is a significant improvement of the Gauntlet 2 over its predecessor, which has a 13-cubic inch volume for the standard gun. This also permits higher filling and regulator pressures that provide more shots for a given caliber and also generates more power for larger calibers and heavier pellets (and slugs).

The Gauntlet incorporates a shrouded barrel in the design, which does a good job of dampening the report for quiet, backyard friendly shooting. The Gauntlet 2 uses more baffles in the shroud, which helps offset the higher volume of air and increased velocity, but both versions are fairly quiet.

As a general statement, the Gauntlet rifles are powerful and accurate. How powerful depends on which caliber and which version you choose. And accuracy depends on finding the best pellet for your rifle, but the potential is there. I have shot the .22, .25, and .30 calibers and can typically keep my 50-yard groups under an inch while shooting off sticks. In a more controlled situation shooting off a rest, the .25 and .30 groups tightened significantly.

I shot 50-yard groups off the bench with the standard Gauntlet in .25 and the Gauntlet 2 in .30 caliber. I found the palm swell and flattened forestock of both versions provided a stable hold on the rests. The comb on the two versions utilizes a different design, but both rifles provide a solid cheek-weld, a good line of sight, and allow for a consistent hold. While both stocks are shootable, I prefer the Gauntlet 2, because it offers better ergonomics and more stability. Both the Gauntlet models are equipped with an adjustable single-stage trigger that has a good tactile feel. The trigger is set at 2.9 pounds out of the box and offers a clean, predictable break. It’s no target grade trigger, but it’s conducive to accurate shooting and well suited for small game hunting.

With the standard Gauntlet .25 I shot five-pellet groups at 50 yards using the JSB Exacts and a second set of groups with the JSB Hades. The Exacts printed groups that were only slightly smaller (.37-inch) than those obtained using the hades pellets (.42-inch). The velocity variance between these five shot strings were also quite small for both pellets. The JSB Exacts are 25.39-grain solid round nose Diabolo pellets, and the JSB Hades are 26.54-grain modified hollow point Diabolo pellets. The energy output calculated for the Exacts was 45 ft-lb and 47 ft-lb for the Hades.

I also shot the .30 caliber Gauntlet 2 in the same session with the same conditions (five-pellet groups at 50 yards using the JSB Exacts and the JSB Hades). I found that the Exacts printed groups that were virtually the same (.58-inch) compared to those obtained using the Hades pellets (.53-inch). I then shot a ten-pellet group to look at the shot-to-shot consistency and found the variance between these ten shots was impressively low. The spread for Exacts fell between 1002 fps and 1010 fps, which yielded an 8-fps variance. The energy output calculated for the Exacts was approximately 99 ft-lb over this string.

What the Umarex Gauntlet Does Worst

If pressed to find faults with the Gauntlet, I’d have to say that both rifle stocks are somewhat bulky. This is because the forestock is constructed to cover the air reservoir, but the ergonomics are still good. Though the gun is large, it will fit most shooters well. I do think that the standard Gauntlet Stock feels a bit cheaper, but that’s to be expected at this price point.

Even though the bolt action functions well enough and reliably auto indexes the magazine, it does require substantial effort to cock. For most shooters this is not a major problem. However, smaller shooters may struggle with it. So, while I think this is an excellent entry level rifle, it might not be the right choice for smaller individuals. The large, knurled cocking handle of the Gauntlet 2 is much more tactile.

While the Gauntlet is regulated, which is very impressive at this price point, the regulator is preset with no external adjustment. If you want an airgun that can hang with some of the best air rifles for squirrels, this could be the perfect rifle for you. On the other hand, if you want to micro adjust the rifle for different pellets for optimal consistency, you might feel limited.

What the Umarex Gauntlet Does Best

I’ve spent quality time with the Gauntlet and Gauntlet 2 plinking, on the range, and hunting. As a matter of fact, one year I brought the Gauntlet with me on an airgun hunt in South Africa to serve as my primary small game gun, and it performed well. Based on my experience I believe the gauntlet is a great option for a small to medium game hunting rig. The power profiles between the Gauntlet and Gauntlet 2 are different, but both offer more than enough knock down power for small game. If you are interested in this rifle, consider how you plan to use it, then decide which version and caliber best suit your needs. For instance, the standard Gauntlet in .22 will provide about 60 shots and generate approximately 25 ft-lb. This is great for hunting small game such as squirrels or rabbits and will reach out past 50 yards with excellent field accuracy. The Gauntlet 2 in .30 caliber puts out nearly 100 ft-lb. This borders the possibility of anchoring a coyote or small hog with a well-placed head shot at the same distance.

Final Thoughts on the Umarex Gauntlet

I think the Umarex Gauntlet is one of those rare birds that delivers a feature set and performance that you would expect from a much more expensive rifle. The two versions of the Gauntlet provide options that should suit a variety of buyers’ needs. Several caliber options, power outputs, shot count, and refinement of operation can be weighed against price for instance. The Gauntlet 2 costs approximately 35 percent more than the standard version. Honestly, that would be my preference because I might use the rifle for larger quarry such as groundhogs or to reach out further for prairie dogs. However, if your primary is squirrel or rabbit hunting, the additional price might not make sense. Still, the Gauntlet 2 runs far less than many guns offering the same performance levels.

I make it a point not to tell people what they should buy. Finding the right gun is a subjective thing. But if you are looking for a rifle with excellent performance and a lot of features for a fraction of premium priced airguns, the Gauntlet line should be on your short list.