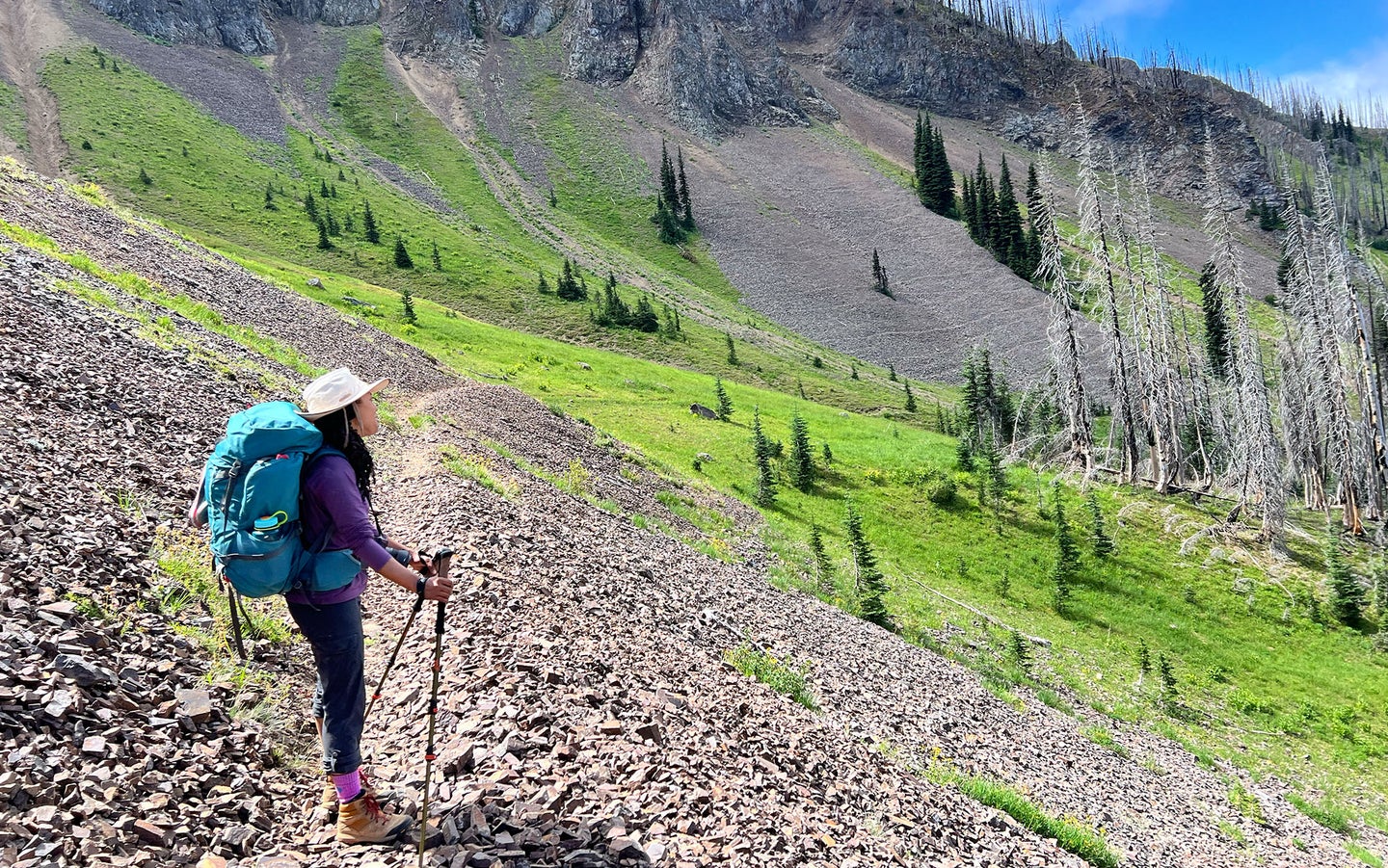 The Kelty Coyote typically retails for under $200, making it one of the more affordable backpacking backpack options on the market—one of the top picks for anyone on a budget. Its overall design is so classic it’s borderline retro: The main compartment, which can be accessed either via a drawstring closure or a zipper at the bottom of the pack, is surrounded by pockets galore. To find out if this budget backpacking backpack is the right choice for you, we sent three testers—with three different body types and gear philosophies—out to put the Kelty Coyote to the test. Here’s what they had to say.

The Kelty Coyote’s shell is made from a robust 420D polyester fabric, with an internal steel frame. That does, however, mean that it is on the heavy side: at 4 pounds, 10 ounces for the unisex 65-liter pack and 4 pounds, 6 ounces for the women’s pack, it’s about a pound heavier than a typical backpacking backpack.

About this Backpack Test

First you have to consider everything you are carrying: a 20-pound overnight load carries a lot differently than 40 pounds of gear for a weeklong trip. Then there is how you pack that gear into your pack—do you use a water bladder or Nalgenes? Are you carrying lots of layers that you’ll need easy access to, or are you hiking in a fair-weather climate? But the biggest X factor of all is you: the padding, hip belt length, torso width, and shoulder strap curve all vary between backpacks, and choosing a backpack that’s wrong for your frame can result in everything from back pain to bruising.

Rebecca Ross is a backpacker, climber, mountaineer, and runner who has written for GearJunkie, Climbing magazine, and Melanin Base Camp.

Diana Helmuth has hiked extensively throughout the western US, Europe, and Chile and is the author of How to Suffer Outside.

Jason Boyle has been backpacking, hiking, and trail running for 30 years and currently works as a guide for REI out of Shenandoah National Park.

Testing the Kelty Coyote in the Field

Fit, Comfort, and Load Bearing
While most backpacking backpacks come in sizes ranging from small to large, the Coyote is one size fits all, and advertises itself as fitting everything from 14 inches (the women’s model) up to 21 inches (the unisex model). It accomplishes this with an adjustable velcro panel in the back of the backpack.

While the testers all had positive feedback for the adjustable back panel, Diana (our tallest tester) noted that adjusting the back panel to its tallest setting leaves a large portion of your back exposed to the “loop” side of the Velcro—while this isn’t as rough as the “hook” side, it still scratched uncomfortably against her back over three days of testing in dry conditions (excessive moisture from rain or sweat would likely have exacerbated this issue). Additionally, since the adjustable back panel pulls out from behind the main back panel section, there is a noticeable ridge that was distracting, though not uncomfortable, while hiking. Comparatively, Rebecca stated that the backpack, when adjusted to its lowest setting to her smaller frame, “felt like it was designed for a short torso.”

This pattern was also seen in the shoulder straps where Diana reported that the shorter- and narrower-than-average design was digging into her shoulders after only five miles of carrying a thirty-five-pound load (by day three of testing, she reported bruising on her underarms). Jason similarly found that, over the 40 miles he carried the Kelty Coyote, it didn’t perform well with loads above 30 pounds—that was when he felt that it started transferring more of the weight to his shoulders than he was comfortable with. Both testers noted that the minimal padding at the shoulder straps and waist belt contributed to their discomfort. Rebecca, on the other hand, made it to 14 miles (the second day of her trip along a 21-mile loop through the Big Crow Basin and Norse Peak region of southern Washington State), before noticing any discomfort: a slight amount of soreness on the arm that she used her trekking pole with, due to a seam on the underside of the strap. Unlike other backpacks, which left bruises on her hips, Rebecca said that “this backpack felt comfortable right away, especially given that it sat more on my waist and above my hip bone, making the weight feel lighter and more balanced without being uncomfortable.”

A closer look at the adjustable back panel shows a reason why users with longer torsos may experience more discomfort with the Kelty Coyote than users with a shorter torso. The adjustable velcro panel on the back of the pack has less structure than the main part of the frame, and the further you pull it out, the floppier it is.

When all the way extended, the panel doesn’t have enough connection points to the rest of the frame to stay fully rigid, causing the pack to pull back on your shoulders even when the load lifters are properly adjusted. While this isn’t an issue for backpackers with shorter torsos, it may cause problems for other individuals on longer outings.

All the testers reported being able to balance the load in their packs to their satisfaction thanks to the unusually roomy interior cavity and two sets of side compression straps.

Storage and Accessibility
This backpack has a classic storage design. The main body is fairly cavernous, able to fit all the big-ticket items that typically go into a backpacking backpack—a sleeping bag, tent, and even BearVault 500, which Diana reported fit both horizontally and vertically. Testers noted that while there is a zipper on the underside pack—which can be useful if you inadvertently pack a must-have item at the very bottom—it wasn’t paired with the typical sleeping-bag compartment separator.

A sleeping bag compartment is typically used to separate your sleep system from potentially messy or dirty gear like your tent, stove fuel, and food back; however, another, better, option is to simply store your sleep system in a trash compactor bag at the bottom of your pack, as detailed in our guide on how to pack a backpack.

The tester with the BearVault 500, Diana, noted that while the bear can did fit sideways in her pack, she was unable to access it from the undercarriage zipper—her preferred method so that she can both access her food and ensure the majority of her pack’s weight is at the bottom and middle, rather than top-loading her pack, which can negatively affect your balance and cause lower back pain.

One of the most unusual features of the Kelty Coyote is its side pockets. In addition to the standard mesh pockets at the bottom sides of the pack, there is also a top side pocket above each mesh pocket—multiple testers noted that they were impressed with how large these pockets were, able to fit a Nalgene bottle and then some. Interestingly, this doesn’t prevent you from stashing your poles on the side of your pack, as they can still slide along the side. One thing to note about the bottom mesh pockets is that they do not have a side opening, which is typically used to access water bottles without having to take off your pack.

The top lid pocket, which most backpackers should leave slightly empty, to avoid overloading their backpack, had its opening zip along the side. One tester, Rebecca, noted that this helped keep items in the pocket from falling out on her three-day backpacking test. Within this pocket, there is a second small mesh zipped pocket, which testers used to hold items, like keys and credit cards, that they didn’t anticipate needing until the end of their trip. Jason, a guide with REI, said that the top lid pocket was easily large enough to fit a “multitool, blister kit in a small 6×4-inch bag, headlamp, and other personal sundries.”

Where most backpacking backpacks have a simple, and flexible, mesh pocket on the back, the Kelty Coyote instead has a single zip pocket—again, along the side rather than at the top. The advantage to having a zip pocket over a mesh pocket is that it will protect any gear you might stash in there from dirt, debris, and the elements. On the other hand, its lack of stretch means that the more you stuff into the main cavity of your pack, the less space there will be in the external pocket. Testers, however, found that there weren’t any issues during testing, with Jason reporting that it fit his “stove, fuel, and gravity water filter system.”

One complaint among the testers was the lack of hip belt pockets. While there is a roomy zip pocket on the left hip belt, the right side has a mesh pocket with an opening on one side. The testers found that this second pocket didn’t work for snacks or other small items—that the only item that made sense to stash there was a phone. While Rebecca did use it for this purpose during her test trip, both Diana and Jason decided against it, due to the lack of a firm closure and because of the potential for breaking their phone if they set their pack down too hard.

As expected, the thicker 420D polyester held up well to the conditions of the trail. While out on a hike on Old Rag in the Shenandoahs, Jason purposefully dropped the pack over 10 feet and tossed it over his head while scrambling along a granite section of trail; the pack “took some scrapes but no holes in the fabric.” At the end of testing the women’s 60-L pack, there were some visible holes on the side mesh pockets—a common fail point for backpacking backpacks.

Rebecca’s take: “The Kelty Coyote is something I would absolutely buy and recommend to anyone with a smaller build.”

Diana’s take: “While I think my height and gear made this backpack a bad match for me, I experienced no back pain with this pack and was blown away by the low cost.”

Jason’s take: “This is the perfect entry-level pack for the person getting into backpacking, but the hip belt didn’t transfer the weight away from my shoulders that well.”

While all three testers agreed that the Kelty Coyote is an unusually good value for a backpacking backpack given its price point, the only tester that was impressed by it enough to continue using it was Rebecca. Even when carrying heavier loads, she reported no pain points except for a bit of scuffing where the understrap seam rubbed against the arm that was most active using the trekking pole. This contrasted with Diana and Jason who, respectively, experienced bruising and the pack sagging once the weight went above 30 pounds. If you are a traditional-style backpacker with a slimmer build (and especially if you have a shorter torso), then the Kelty Coyote should go to the top of your shortlist.