A tent made for mountain hunting needs to be light, durable, and designed to survive the elements. The Stone Glacier Skyscraper four-season tent is all that and more. 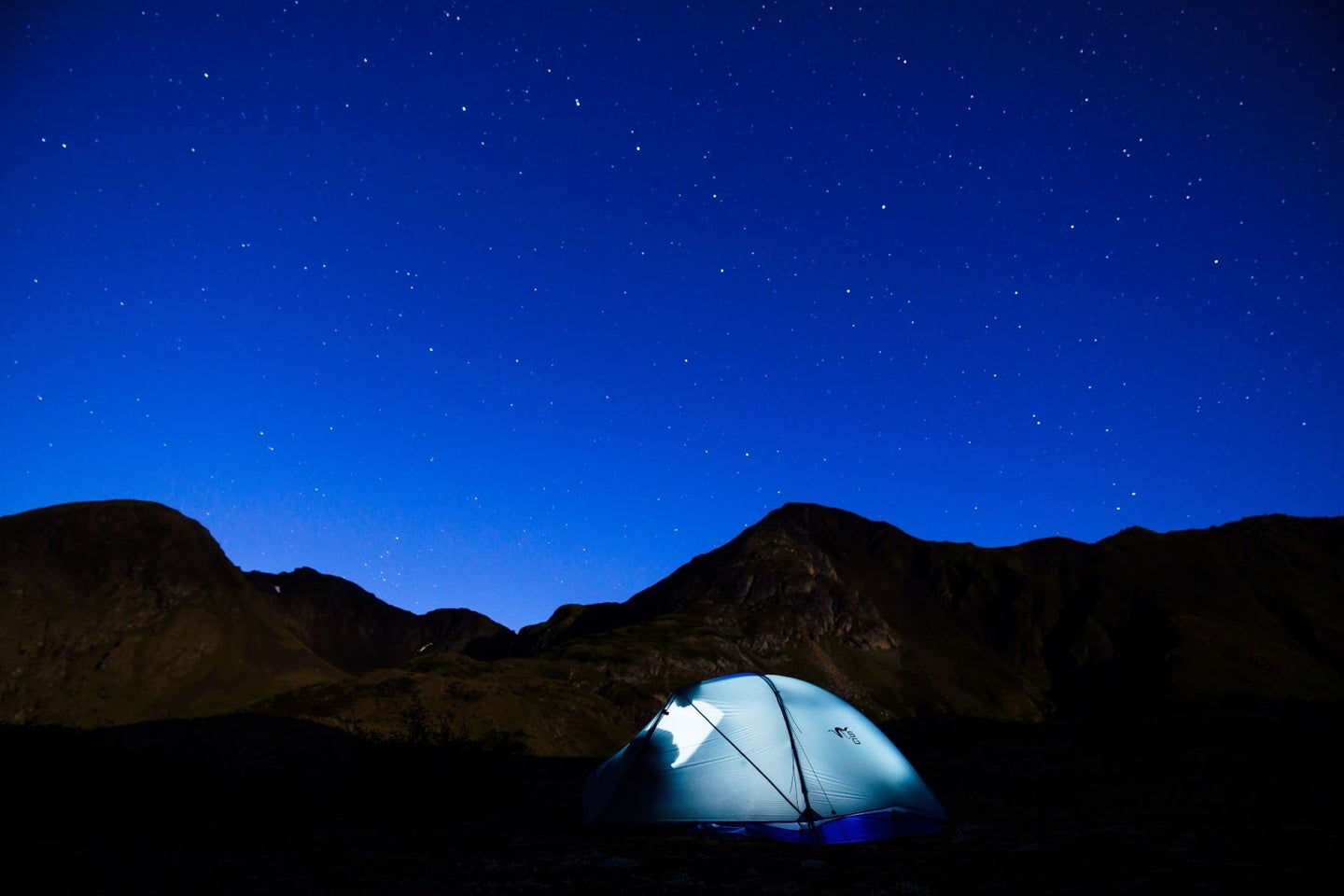 So much hunting gear is labeled and marketed as “backcountry” these days that the term has almost become meaningless. Unfortunately, that makes it easy to overlook real backcountry hunting products, like the Stone Glacier Skyscraper 2 Person tent when they’re embedded in an oversaturated market. But here’s the thing, the Skyscraper 2P wasn’t really made for the general “backcountry” either. It was built for the mountains. This is a lightweight, packable, heavy duty tent that’s designed to keep you alive, and even keep you comfortable, during the toughest mountain hunts. I field-tested this tent during two hunts in southeast Alaska along with three other diehard Alaskan mountain hunters. We were all thoroughly impressed with the performance and functionality of the Stone Glacier Skyscraper 2 person tent, which was updated and reintroduced last year.

What to Look For in a Backcountry Hunting Tent?

Backcountry gear is trendy right now for good reason. Generally, gear in this category is lightweight, looks cool, and it’s marketed extremely well. But don’t let the hype cloud the real purpose of this gear: it needs to keep you alive. A good mountain hunting tent needs to withstand gusting winds, rain, snow, jagged rocks, plus be packable, lightweight, and look cool. It’s clear that the Stone Glacier Skyscraper was designed for just that. The most immediately interesting feature of this tent is the WebTruss system. The two main poles run through sleeves which are then clipped to the tent body. Most tents use either clips or sleeves to attach the body to the poles. By using both clips and sleeves in a truss system, the Skyscraper is stronger (the sleeves distribute weight evenly across each pole) and it’s easier to pitch in high winds thanks to the clips (more on this later).

The tent has doors on either side and two generous vestibules. This part is critical for hunting two people out of one tent. You’ll store your pack and other non-food items in the vestibule to keep them sheltered overnight. Plus, it’s a place to put your boots on, heat dehydrated meals in bad weather, drink coffee, and get mentally prepared to crawl out of the tent and get your sorry ass up the mountain.

But here’s the real feature that mountain hunters care about: this tent is light for its class. The packed weight is under five pounds, which is impressive considering the Skyscraper is marketed as a 4-season tent. Stone Glacier has accomplished this ultralight weight by using 20 denier nylon in the floor and 15 denier nylon in the body and the door. Most four-season tents use a much heavier fabric. Stone Glacier rationalizes that its WebTruss system adds all the strength needed against heavy winter snow so the heavier fabric is unnecessary. A word of advice, if you’re going to invest in this tent, spend the extra $70 for the footprint. It’s made of 30 denier nylon and will prevent sharp rocks from wearing a hole in your tent floor. It weighs only 6.7 ounces and while it comes in it’s own stuff sack, you can easily fit it in with the rest of the tent bag.

My hunting buddy Bjorn Dihle, who has hunted, climbed, and adventured all across Alaska including a ski trip through the Arctic National Wildlife Refuge, gave his opinion on the four-season capabilities of the Stone Glacier Skyscraper while we were hiding out in the tent waiting for the rain and 30 mph winds to subside.

“It’s really a 3.5-season tent,” Dihle said. In other words, it’s great for almost any hunting and outdoor adventuring scenario year-round. But, if you were planning a true winter expedition in the deep sub-zero temperatures of the far north, you’d want a heavier tent.

I brought two of these backpacking tents to southeast Alaska for blacktail deer and mountain goat hunts. For both hunts, we hiked from the beach up, through the old-growth timber of the Tongass National Forest into the alpine. In one day’s time, I went from my home in Minnesota to the top of a mountain in Alaska (you can read all about that adventure in our latest digital edition).

My hunts happened to fall during a time when southeast Alaska, which is known for its rugged coastal rainforest environment, was receiving record-breaking rainfall. So, yes, I put the tent through plenty of rain testing, and for the most part, it performed flawlessly.

One thing I did notice during a test run before the hunt was that a tiny drop of water leaked through the venting system. The tent has a vent that runs through the ceiling and is closed by a drawstring. During a biblical summer rainstorm in Wisconsin, I noticed a drop of water soaking through the vent, but about two inches of electrical tape solved that problem. During the Alaska hunt, my guide Lucas Mullen never taped over the vent of his tent and never had any leaks even though we had several days of rain.

We were hunting mountains overlooking the Lynn Canal, a 200-mile inlet running straight north from the ocean through the Chilkat Range. The mountains get steeper the deeper you go into the inlet, which creates a sort of wind tunnel effect that, when combined with the tides, can make for rough, dangerous seas.

“Even really serious fishermen, when they hear ‘Lynn Canal,’ they’re like, ‘I fucking hate that place,’” Mullen told me, who is a commercial fisherman himself.

On both hunts we were camped in the alpine (above treeline) so there was minimal protection from the wind. The highest estimated winds we faced were about 35 mph according to Dihle’s weather report. He and I spent a whole day in the Skyscraper socked in, just waiting out the weather. The Skyscraper is designed for plenty of headroom so you can sit upright when you’re stuck in there for a day. Most importantly, the tent held up bravely against the gusts. It’s hard to overstate the importance of this. If you’ve been hunting in the cold and wet all day and make it back to camp at the point of exhaustion only to find your tent collapsed, battered by the wind, or blown off the mountain, that’s not a not an inconvenience, it’s a dangerous situation. We made sure to tie at least one guyline off to a scrubby tree and secure the staked down lines with heavy rocks. But Stone Glacier also built in trekking pole straps so you could use your poles for added support on either side of the tent if things got really nasty.

It’s also worth noting that once we got used to the design of the tent, we were able to set it up quickly, even in the wind. Under calm conditions we simply left the WebTruss clipped to the tent body, slid the poles in, popped the tent, and cinched down the fly. In high winds we secured the poles before clipping on the tent body.

After living out of the tent for several days I would describe the overall design as “clever.” It has more pocket space than you need and lines to hang gear from inside. The doors have a smart venting system.

“It’s like this tent knows that it’s smarter than me,” Dihle said after our umpteenth hour of being socked in.

With a good cleaning, the tent had essentially zero wear and tear. No rocks penetrated the footprint or the floor. No poles were bent or broken.

What the Skyscraper 2P Does Best

This tent is ultra light. The old adage of “every ounce counts” is true on a mountain hunt and it’s obvious that this ultralight backpacking tent was designed with that concept in mind. Nothing is heavier than it needs to be. At the same time, this heavy-duty tent is sturdy enough to truly handle the elements of a mountain hunt. Stone Glacier has done a fantastic job of identifying what hardcore mountain hunters need and delivering them just that.  I left one of the tents with Mullen to use for the rest of his goat hunting season and he happily swapped out the tent he had been using.

What the Skyscraper 2P Does Worst

The lighter nylon for the tent body and floor can be seen as a sacrifice Stone Glacier engineers were willing to make. But also, there are plenty of two-person tents that are lighter than the Stone Glacier Skyscraper, those just happen to be three-season tents that are designed for backpacking, not necessarily mountain hunting. Those lighter three-season tents are usually a little cheaper, too. It’s all a tradeoff.

Does the Stone Glacier Skyscraper 2 Person Tent Accomplish Its Mission?

Yes, without a doubt. Stone Glacier Skyscraper has made a name for itself among the mountain hunting crowd for making smart, useful hunting gear. The Skyscraper 2P helps build that reputation by bringing a unique design that really works under the conditions it was made for—the toughest mountain hunts.