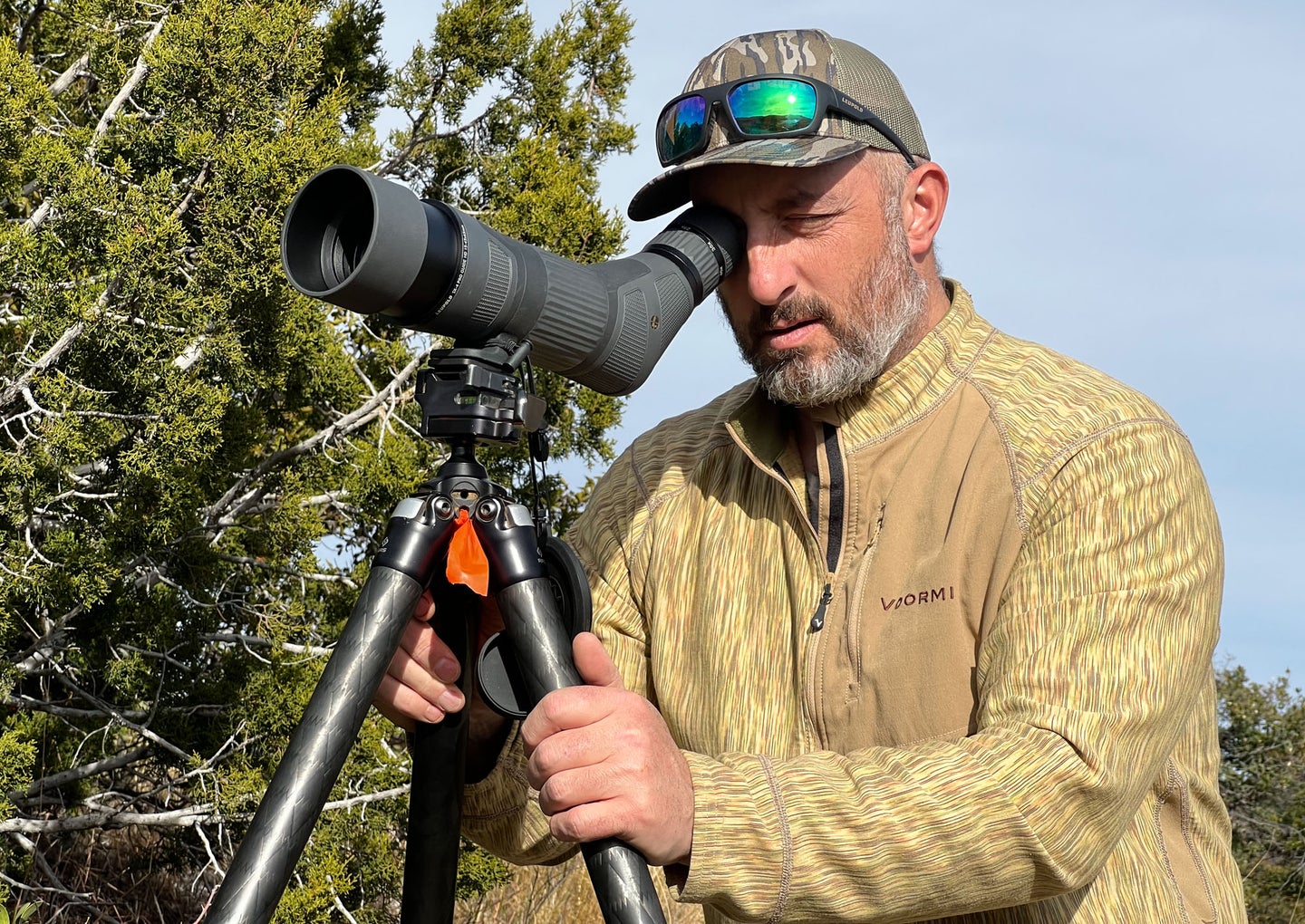 The author glassing up Coues deer in Mexico during a January hunt. John B. Snow
SHARE

I’ll get to Voormi in a second, but like many hunters of my generation I was taught that wool was the way to go. I invested in Filson’s finest—their single Mackinaw Cruiser and matching pants. Later on, I took cues from the Benoits, the Northwoods deer hunting legends from Maine, and outfitted myself with the wool plaid shirts, jackets, and pants they used while following monster bucks through the snow.

As old-time hunters know, the advantages of wool are that it retains its ability to insulate even when wet, it is quiet when going through brush, it is durable, and should a wool garment get torn, you can repair it.

Wool comes with some downsides, however. After a day of still-hunting in the wet snow or rain—as was the norm in many of the places I lived and hunted, such as northern Michigan and Washington’s Cascade mountains—those wool garments, which were already fairly bulky, seemed to double in weight. They also soaked up sweat as readily as water and could get pretty ripe throughout a hard week’s hunt.

With the advent of all the miracle fabrics over the last 20 years, I gravitated away from wool for the most part, other than with my socks and the occasional merino long john. Lightweight, waterproof, and breathable layering systems from the likes of Sitka, Kuiu, Stone Glacier, and others came to dominate my kit.

How To Say “Voormi”

But about two years ago, I came across Voormi, a Colorado-based company with an unfortunately difficult name to pronounce (it rhymes with “for me”). I started with one of their zip long-sleeved base layers and slowly added pieces to my gear collection. Before long, I regularly wore about a half-dozen of their items and realized that their wool was the real deal.

It’s come to the point where it doesn’t matter where I hunt, fish or shoot—whether in Africa, Alaska, Montana, Mongolia, or Mexico—chances are I’m wearing something made by them. One of the things that’s most interesting about the company is the way they’ve built pieces that not only excel in the cold and wet, which you would expect from wool, but that work great when it’s hot and sunny too.

Voormi has a bunch of different types of technology incorporated into their pieces. I normally don’t like to recite marketing catchphrases, but Voormi has enough going on with their lineup that it makes sense to run down the list. Also, having put their stuff to the test in so many different environments, I feel that their tech does what they say it does, so I’m comfortable using their jargon.

Their Core Construction mixes wool, carbon fiber, polyester, and cotton nylon within a single layer of fabric to create waterproof and windproof breathable garments that are quiet and comfortable.

The Dual Surface UL is ultralight blended wool that protects against the sun, weighs hardly anything, wicks moisture, and does really well when it is hot and sunny. They also have a Dual Surface Precision Blend, which is a bit more robust for when it is colder but also wicks very well.

Their Surface Hardened thermal wool is one of the more interesting and versatile fabrics they make. It is super rugged and adaptable to a huge range of conditions. It sheds water, blocks wind, and provides excellent warmth, yet is super breathable—all while being comfortable to wear and able to handle a lot of abuse.

Another category I have a lot of experience with is Voormi’s Phase S.C., which is their camo. But being a techy company, they refer to it as their “concealment technology.” This too is versatile. It’s quiet and designed to have a minimal visual signature in low light. It also does a good job of not retaining odors. It works well in cool to cold conditions and can cope with a moderate amount of precipitation. Because it is so breathable, it’s also good for active hunters who jack up their core temperature hiking and climbing and then might end up sitting still for an hour or two while glassing.

Testing Voormi In The Field

As I mentioned, I’ve taken Voormi’s stuff around the world and have been really impressed by how well it handled everything I’ve thrown at it. Here are some of my experiences and observations with specific pieces.

Linus has his blanket. Frodo has his ring. And I’ve got my River Run Hoodie. This long-sleeved, hooded garment comes with me damn near everywhere. It uses the Dual Surface UL technology and is made of Merino wool. It has a loose, comfortable fit, and even though it is very light, it can take a beating. I wear it during my shooting competitions, in anything but the hottest conditions I’ll wear it while fishing, and, most recently, it survived a brutal two-week sheep hunt in Alberta.

It does an amazing job of keeping the sun at bay and is a great layering piece. During the sheep hunt, I wore it directly against my skin when it was warmer out and slept with it on at night when it got cold. Even after wearing it for over a week straight, it didn’t get rank.

Many hours of that hunt were spent on horseback busting trails through fir forests, and despite the abuse, it came through in one piece—though it does have a number of small holes in it now, courtesy of a 40-foot slide down a steep shale mountainside. It costs $129 and is worth every penny.

This midlayer shirt is astonishingly versatile. It combines the Surface Hardened fabric with the Phase S.C. camo. Mine is in the Harvest pattern and has worked well on hunts in Texas and Mexico where the arid conditions create a lot of yellow and brown vegetation.

I don’t know exactly what goes into the Surfaced Hardened technology, but it does a good job when moving through mesquite and other thorny brush. I made a 1,200-yard stalk on an aoudad in West Texas last winter while wearing my pullover and was able to slip to within 90 yards of the ram without spooking it.

The Access NXT is especially at home in cooler-to-cold conditions. Coupled with an appropriate baselayer it keeps you warm in even freezing temps. It also does a very good job at cutting the wind. The icing on the cake is that the four-way stretch fabric is remarkably comfortable as well.

Speaking of baselayers, this simple short-sleeved merino t-shirt qualifies as a go-everywhere essential. Voormi isn’t the only company to offer merino wool baselayers, but not every other clothing maker has figured out how to make wool comfortable when worn against bare skin.

This shirt doesn’t feel like traditional wool at all and I’ve worn mine all day (and all night) in complete comfort. It keeps you warm when it is cool, and wicks well so that it’ll keep you cool when it is warm. It layers easily with other pieces to add an extra degree of warmth when needed.

When the temperatures drop, and the wind picks up, I reach for this hoodie. It’s deceptively warm and windproof. It so light, in fact, that it took me a while to figure out that it isn’t really suitable for mild weather; I’d put it on under normal hoodie conditions and would soon overheat.

But when it gets cold—which is the case for half the year in my home state—it is just the thing. Like the Access NXT Pullover, it is built with the Surfaced Hardened technology, giving it impressive abrasion resistance.

When zipped up, the collar comes right up beneath the nose, and the hood snugs up around the head, offering great protection against cold winds. For winter fly fishing excursions and waterfowling, it is ideal.

It has a central pocket that zips on either side and is cut with a fairly snug fit, so it doesn’t have any excess slop. But I’m not a small guy, and the XL fits me extremely well; it doesn’t bind or constrict my movement in any way but wears well under waders.

I’ve also used Voormi’s socks and long underwear, and they do everything you’d expect from those items. Voormi also makes more extreme weather outerwear, which I haven’t used, but I have no reason to doubt that it doesn’t offer the level of protection and performance that the company claims.

Making good clothing is surprisingly difficult. Normally, when I turn a critical eye to a company’s offerings, I will find a number of pieces that work well, along with others that could use some improvement. Voormi seems to have avoided this inconsistency. Each of their items I’ve added to my kit has stood out for its performance.

But more than that is how well the pieces complement each other. The baselayers and midlayers work in conjunction with each other really well for mix-and-match versatility. The upshot is that you can pack just a handful of their items and be prepared for a huge variety of environmental conditions.

The combination of Voormi’s performance and durability also takes the sting out of their premium prices. For anyone who relies on high-performance technical gear—or who just wants the benefit of best-in-class gear—Voormi is a smart option.

And let’s not forget that this is happening in the context of a revival of the most traditional—and beloved—sportman’s textile: wool. For those of my generation who were brought up with a reverence for sheep-based stuff, it is heartening to see it experience a renaissance and regain its status as one of the best materials for outdoor gear.