Gun News: Trump Tells NRA Attendees They Have a “True Friend and Champion in the White House” 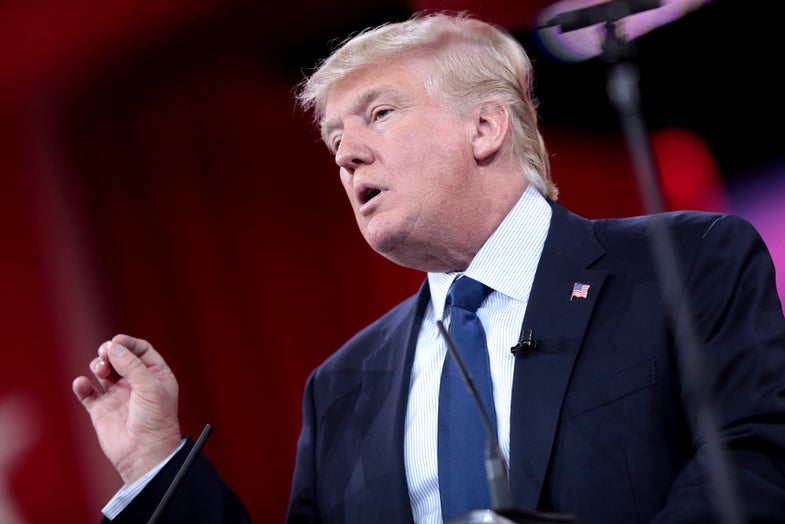 Trump NRA Speech: ‘You Have A True Friend And Champion In The White House’

President Donald Trump pledged to “never, ever infringe on the right of the people to keep and bear arms” in a keystone speech before thousands of “Second Amendment people” during the first day of the National Rifle Association’s 146th annual convention April 28 in Atlanta.

“The eight-year assault on your Second Amendment freedoms has come to a crashing end,” Trump said. “You have a true friend and champion in the White House.”

Trump, addressing the NRA on the 99th day of presidency, did not issue any new policy pronouncements but reaffirmed his campaign pledges to expand gun ownership rights and roll back some restrictions instituted under the Obama Administration.

But Trump did thank the NRA for being among the first advocacy groups to support his campaign when he was a heavy underdog to win the Republican primary and defeat Democrat Hillary Clinton in the general election.

“Only one candidate in the general election came to speak to you, and that candidate is now the president of the United States, standing before you, again,” Trump said. “I have a feeling that in the next election, you’re going to be swamped with candidates, but you’re not going to be wasting your time. You’ll have plenty of those Democrats coming over, and you’re going to say, ‘No sir. No thank you. No ma’am, perhaps ma’am,” he said, taking a jab a Massachusetts Senator Elizabeth Warren, who many believe could run as a Democratic presidential challenger in 2020.

”It may be Pocahontas, remember that,” Trump said, referring to Warren derisively. “She is not big for the NRA, that I can tell you. But you came through for me, and I am going to come through for you.”

The last sitting president to address the gun owners’ convention was Ronald Reagan in 1983 in Phoenix, Ariz., during his re-election campaign.

— Trump: ‘8-year assault’ on Second Amendment is over

— Trump to NRA: ‘Eight-Year Assault’ on Gun Rights Is Over

— Who will be the new enemy for Trump and the NRA?

— From Gandhi to guns: An Indian woman explores the NRA convention

— Gun control groups ready for showdown with NRA: ‘We’ll spend what it takes’

ONE LESS BRICK IN THE WALL

SB Tactical, a relatively little-known firearms parts manufacturer based in St. Petersburg, Fla., announced on April 25 that the Bureau of Alcohol, Tobacco, Firearms and Explosives (ATF) has reversed previously rulings that made the company’s Pistol Stabilizing Brace illegal.

Developed by Marine/Army veteran Alex Bosco to help a fellow wounded veteran shoot heavier handguns more easily at a local firing range, the SB-Tactical pistol stabilizing brace was introduced in 2013 for use with AR-15 pistols, which function like a AR-15 rifle but have barrels shorter than 16 inches and do not include a shoulder stock.

So-called “short-barreled rifles” (SBRs) are banned under the 1934 National Firearms Act (NFA), when such firearms were associated with Depression Era gangsters and subsequently prohibited by Congress.

The SB-Tactical brace wraps around a user’s arm, allowing the shooter to fire the AR-15 pistol more comfortably one-handed. The brace is made of a flexible plastic, attaches to the back of an AR pistol, and looks like a stock. In 2015, the ATF determined that using the brace on an AR-15 makes it a banned SBR.

But in an eight-paragraph clarification letter to SB Tactical, it reversed that determination, stating “an NFA firearm has not necessarily been made when the device is not reconfigured for use as a shoulder stock – even if the attached firearm happens to be fired from the shoulder.”

As long as the brace is installed as intended and isn’t modified in any way, the ATF maintains that putting it against a shoulder doesn’t turn it into a SBR.

The ATF’s reversed ruling, while limited in its scope, could be significant as a precursor of things to come, with “major implications for industry” that “may even undercut more than 80 years of gun control,” writes Christian Lowe, editorial director with We Are The Mighty and the former editor of Shooting Sports Retailer magazine.

“The biggest, and perhaps most significant, effect of the ruling could be the undermining of the National Firearms Act,” Lowe writes. “The technology of today has forced the feds to tie themselves in knots trying to write rules that comport to a gun law written when the Thompson submachine gun was the biggest threat and revolvers ruled the handgun world.”

“Utah was the first state to allow guns on campus in 2004,” Andy Pelosi, executive director of The Campaign to Keep Guns Off Campus, told Abby Jackson and Skye Gould in an April 27 Business Insider article. “Since then, there has been a trend of pretty much one state a year changing their laws.”

Campus carry laws adopted in the last 17 years only pertain to public colleges and universities, although some states require private colleges to opt-out with an approved policy.

According to Pelosi and others, momentum to recognize that the Second Amendment exists even on college campuses was spurred by the April 2007 Virginia Polytechnic Institute mass shooting by Seung-Hui Cho, who killed 32 people and wounded 17 others before killing himself.

Gun control adherents demanded that gun laws be reformed, claiming someone with a history of mental health issues such as Cho should have never been able to purchase two semi-automatic weapons. Gun rights advocates argued that an armed student or faculty member could have at least diminished the carnage, and that denying the right to carry a firearm for personal protection was unconstitutional.

“It’s the God-given right that people have to not be a victim in the state of Georgia,” Georgia Rep. Mandi Ballinger, who sponsored the state’s recently-passed bill (which has not, as yet, been formally signed into law by the Governor). “States that have enacted campus carry measures have become safer.”

This year, 16 states that don’t currently allow concealed weapons on campus have introduced campus carry, including New York. On May 1, the Maine Legislature’s Committee on Education and Cultural Affairs will hold a public hearing on Legislative Document 1370, which would prohibit public colleges and universities in Maine from adopting policies against the lawful possession, carrying or transporting of firearms or ammunition on campus.

— ‘Point, Don’t Shoot’ Law Close To Being On The Books In OK

— Update on Gun Bills in the Nevada Legislature

— Hearing on bill to ban guns from R.I. schools leads to tense exchange

— Should out-of-state gun owners be allowed to bring concealed weapons to N.Y.?

The lawsuit, which names California Attorney General Xavier Becerra as chief defendant, seeks to overturn the ban on owning magazines that hold more than 10 rounds.

Starting July 1, magazines that hold more than 10 rounds can no longer be legally bought, sold or possessed in the state. San Francisco attorney George Lee, who is representing the gun owners, said the ban violates their Second Amendment right to bear arms.

Lee told the Associated Press that among the more egregious components of the ban is requiring Californians to hand over their magazines, which amounts to the government taking people’s private property.

Fresno County Sheriff Margaret Mims agreed, noting she opposed the law simply because it will put her deputies in a difficult position.

“It truly is a government taking if they are going to force people to turn their magazines,” Mims told the AP. “I will tell you that if somebody is a normal law-abiding citizen, it will not be a priority of the sheriff’s office to go out and search for these magazines.”