Since before the Second Amendment, Americans have used firearms to shape our history. Thus, there have been an innumerable array... 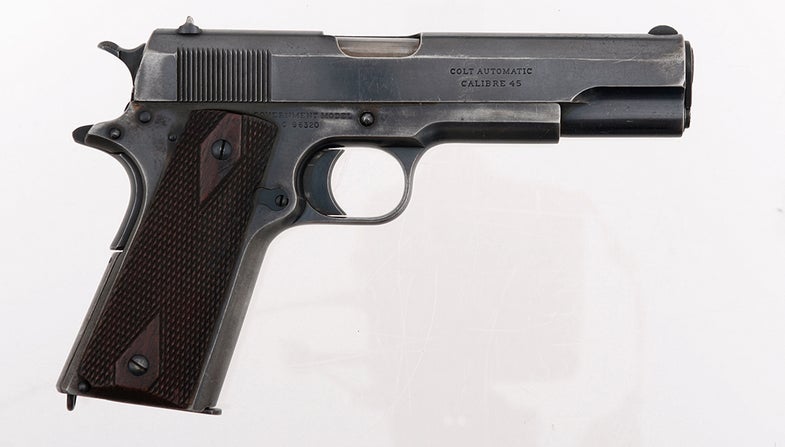 Since before the Second Amendment, Americans have used firearms to shape our history. Thus, there have been an innumerable array of firearms produced during the lifespan of the United States. I recognize it may be kind of ballsy to narrow the list down to ten firearms – especially when Chris Kyle did it so well. But here’s a list of guns that certainly have impacted our country both at home and abroad.

The American long rifle goes by many names – most notably the Pennsylvania or the Kentucky. These beautifully designed rifles (initially flintlocks) were popular in the making of America. During a time when smoothbore muskets were the infantry gun of choice, the long rifle was an iconic symbol of American revolutionaries during the War for Independence.

Hall doesn’t make many Top 10 lists for guns in American history, but this breechloading firearm should. History often remembers Eli Whitney’s role in the popularization of interchangeable parts in America, but it was John Hall who truly made it so. In 1816, he not only pitched the concept of successful interchangeability to the U.S. government, but he also got them to adopt a breechloading rifle that was long ahead of its time.

Most Top 10 lists brag on the Colt Single Action Army and for good reason, but if Colt hadn’t found financial success earlier in the company’s history, then that gun wouldn’t have been invented. His first revolver, the Paterson was not the ticket, even though it inspired other revolver designs. But it was his Model 1851 Revolver that became his first commercially successful handgun.

The Winchester Model 1873 is an obvious pick for this list. While it was not the only gun used in the West, it has certainly become a symbol of Americanism. It became known as the “Gun that Won the West,” and has been a central actor in pop culture from the Wild West to the Western.

The Springfield Model 1903 was adopted in June of 1903 and was used for almost 75 years. It was the standard infantry arm of the U.S. in World War I. It was ultimately replaced by the M1 Garand (spoiler alert!), but was still issued in World War II. The Model 1903 even appeared as a sniper rifle during the Korean and Vietnam Wars.

Speaking of guns that have stood the test of time, the Colt 1911 has done just that. This John Browning design is best known to be chambered in the .45 ACP cartridge. This handgun was the standard-issue sidearm for the U.S. since it’s invention until the 1980s. And today, pretty much every gun manufacturer makes their own version.

The Tommy Gun is known as the quintessential gangster gun – thanks Hollywood. This firearm, designed by John Thompson around 1918 was originally intended for use in trench warfare and by law enforcement. But it quickly became a symbol of the Prohibition Era, used by both the good and the bad guys. It also saw action in later military conflicts and is truly one of the most recognizable guns on the planet.

Browning makes another appearance. This air-cooled machine gun wins the award for the coolest name (see what I did there?), the Ma Deuce. The M2 fires a .50 caliber round that is deadly at 2,000 yards. This machine gun is the longest serving weapon in U.S. Small Arms history.

And here comes “the greatest battle implement ever devised.” That was certainly the opinion of General George S. Patton. The semi-automatic M1 Garand, designed by John Garand of Springfield Armory, replaced the bolt-action Model 1903 because of its higher rate of fire. After World War II, many M1 Garands were converted to selective fire and used in testing for the gun that would become the M14.

Most Top 10 lists incorporate the M16 Rifle into the guns that shaped American history, and rightly so. For this list, however, we wanted to give a nod to the platform that’s been popularized in both selective-fire military and semi-automatic sporting variations, the AR-15. Believe it or not, this black gun concept, which was a scaled-back version of the AR-10, is more than 50 years old and the earliest models are even making it onto the ATF’s Curio and Relics list!