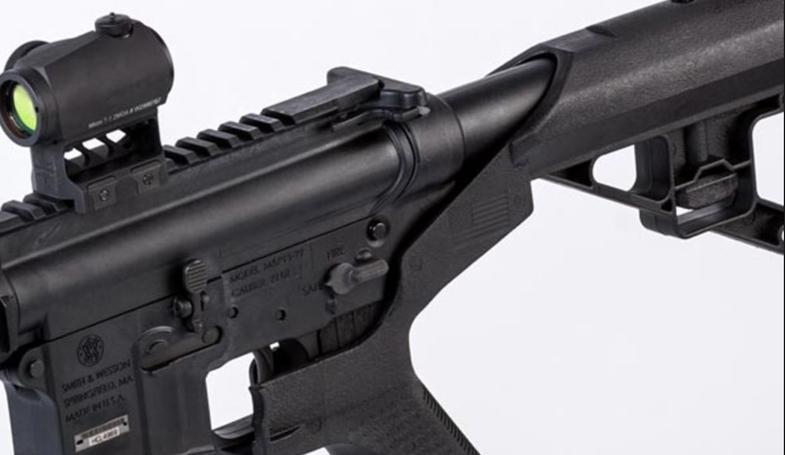 The Department of Justice (DOJ) and Bureau of Alcohol, Tobacco, Firearms, and Explosives (ATF) have initiated a rule review that will likely lead to banning bump stocks within a year.

“Possessing firearm parts that are used exclusively in converting a weapon into a machine gun is illegal, except for certain limited circumstances,” Attorney General Jeff Sessions said in a Dec. 5 press release. “The regulatory clarification we begin today will help us to continue to protect the American people by carrying out the laws duly enacted by our representatives in Congress.”

Investigators say Stephen Paddock had 12 bump fire stock — or bump stock — devices in his Las Vegas hotel room, enabling him to shoot 1,100 rounds in less than 10 minutes, at times firing off 100 rounds in the span of a few seconds, to kill 58 people and wound hundreds more. Bump stocks have been under scrutiny since.

Bump stocks can modify some semi-auto rifles like the AR-15 to allow it to fire in rapid succession. Also known by the brand name Slide Fire, they use the recoil effect of semiautomatic rifle fire to “bump” the gun’s trigger back into the trigger finger, allowing the weapon to discharge repeatedly.

Bump stocks were approved for sale in 2010 by the ATF’s Firearms Technology Branch. The bureau determined that device “performs no automatic mechanical function when installed” and the shooter must still apply “constant” forward and rearward pressure to a gun equipped with one. Designating the device as a “firearm part,” the bureau ruled they need not be regulated under federal gun laws.

The ATF has submitted an Advanced Notice of Proposed Rulemaking to the Office of Management and Budget. The process, which will require public hearings, generally takes eight months to a year to complete.

Bipartisan legislation proposing to ban bump stocks failed in October. Remember the Curbelo/Moulton bill, which never actually mentions bump stocks by name but would inadvertently criminalize possession of a wide range of semi-automatics?

Yeah. Well, after that knee-jerk debacle, House Speaker Paul Ryan steered discussion toward a regulatory fix instead of a legislative ban, which is what prompted the ATF to initiate its rule-making process.

Not to be deterred by federal inertia, lawmakers in several states have leaped into the fray. Before Oct. 1, California was the only state that explicitly restricted the sale of bump-fire devices with a 1990 statute that bans “multi-burst trigger activators.”

The Massachusetts Senate voted 33-0 on Oct. 12 to ban the sale of bump stocks and trigger cranks, attachments that increase the firing rate of a weapon. The state House voted 151-3 in favor of a bump stock ban on Oct. 11.

New York does not ban bump stocks specifically, but restricts weapons that simulate machine guns, meaning it may be legal to sell or manufacture bump-fire stocks in the state, but illegal to attach one to a rifle.

New Jersey, Oregon and Minnesota laws, like Massachusetts — even before its newly adopted and gratuitous bump stock ban — prohibit “trigger activators” that increase a weapon’s rate of fire to that of a fully automatic gun, which is a bump stock by definition. Michigan bans devices that “convert a semiautomatic firearm into a fully automatic firearm” and allow continuous firing “without renewed pressure on the trigger for each successive shot.”

— What the New ‘Concealed Carry’ Gun Law Could Mean for NYC

— WHAT GUN LAWS PASSED IN 2017? TRUMP ISN’T DOING ANYTHING ABOUT GUN VIOLENCE BUT STATES ARE STEPPING UP

— The Clash of Gun Rights and Federalism

— [No, Salon, the U.S. Was Not ‘Founded on Gun Control’](http://www.nationalreview.com/article/454741/salons-second-amendment-911-truthers-screed-misses-mark/]

This is the second lawsuit filed by Giffords’ group in less than six weeks. On Nov. 9, it filed a lawsuit against the Trump Administration claiming the Bureau of Alcohol, Tobacco, Firearms and Explosives did not turn over copies of communications between ATF officials and gun lobbyists made in the days after the Oct. 1 mass shooting in Las Vegas.

So, of course Trump’s nominees would be friendly to the Second Amendment. And, of course, they would “bear the NRA’s stamp of approval.” Of course, because, you know, elections have consequences.

Trump entered office with a vacancy on the Supreme Court, since filled by April’s confirmed appointment of Neil Gorsuch. In addition, 26 of 179 judgeships in the 13 federal circuit courts were vacant and at about 120 of 673 judgeships in the 93 federal district courts were unfilled. Trump, however, has been slow to submit nominees to fill these nearly 150 federal court vacancies. By mid-December, just 12 appellate court judges and six district court judges nominated by Trump had been confirmed. The administration had only named six candidates to fill the remaining 14 circuit court seats and 32 nominees for more than 110 district court vacancies.

Nevertheless, Giffords falsely claims in her complaint that the “Trump Administration has been naming judges with lifetime tenure to the federal bench at breakneck speed.”

Giffords continues: “We’ve demanded that the administration turn over any records that show the gun lobby’s attempts to influence who gets named to the federal courts because the public deserves and needs to know who is calling the shots on judges. Because the administration has stonewalled us on producing these records, we’ve had no choice but to meet them in court.”

It’s unclear what “documents” would confirm such a thing, unless the ballots cast by 5 million NRA members and millions of other gun owners in November would suffice.

With those who obtained pistol permits before January 2013 — when the New York SAFE Act was haphazardly rushed through the state legislature as if it was some kind of generation-defining tax reform bill being presented to Congress — are facing a Jan. 31 deadline to “recertify” and county clerks who must do the “recertifying” have no idea what, exactly, that means.

“There are so many unanswered questions now that this has become a big mess,” Niagara County Clerk Joseph Jastrzemski told Joe Mahoney of CNHI News Service on Dec. 19. “The biggest question we have is: What is the due process going to be if someone misses the recertification deadline date?”

Clinton County Clerk John Zurlo told Mahoney that only about 2,500 of the roughly 7,000 pistol permit holders in his county have completed the recertification. “I think the state should be putting out a statewide ad to tell people about the deadline,” Zurlo told Mahoney. “We’re getting close to the deadline, but there are still a lot of questions and we don’t know the answer.”

The New York State Association of County Clerks’ letter asks His Majesty, Lord Gov. Andrew Cuomo, and several of his minions to, for instance, identify the agency that will “secure” weapons from those who fail to update their permits. They also someone, anyone, even His Majesty, Lord Gov. Andrew Cuomo Himself, to identify the party responsible for notifying gun owners they are no longer in compliance with the SAFE Act requirements.

Mahoney reported that as of Dec. 19, the New York State Police said 205,017 pistol permit holders had completed their updates. But that option is not available in many areas of the state. For instance, in Otsego County, pistol permits are administered by the sheriff’s department. Sheriff Richard Devlin Jr. told Mahoney he has no plans to deploy deputies to notify gun owners their permits have lapsed. He is using social media posts to remind gun owners of the looming deadline.

Niagara County’s Jastrzemski told Mahoney that he doesn’t think county clerks are responsible for notifying gun owners their certifications have lapsed. “This was not an initiative of the clerks,” he noted. “This has been so poorly run that I have been out all over the place to help get people recertified.”

“Nobody took the time or made the effort to find out what all this would entail,” New York State Rifle and Pistol Association Director Tom King told Mahoney. “This was a case of ‘let’s get this done, and we will figure it out later.’ But the details are now coming back to bite them in the butt.”

— Indiana: New Bill Makes Exception for Carrying a Gun on Church and School

— NEW JERSEY MOVES TO OUTLAW ‘BUMP STOCKS’ FOR ALL RESIDENTS

A second lawsuit has been filed by surviving family members of victims of the Nov. 5 church shooting that left 26 dead and 20 wounded in Sutherland Springs, about 30 miles east of San Antonio.

The family of Joann Ward, 30, and her daughters Brooke Ward, 5, and Emily Garcia, 7, who died in the shooting, are seeking $25 million in damages, accusing Academy Sports & Outdoors of not complying with the law when it sold shooter Devin Patrick Kelley a gun at a San Antonio store, according to the San Antonio Express-News.

The Holcombe family, who lost eight members in the shooting, has filed a lawsuit against the U.S. Air Force for failing to report Kelley’s domestic violence conviction to the FBI’s background check data base. The conviction would have prevented Kelley from legally purchasing the firearms used in the shooting.

According to the San Antonio Express-News, Ward’s parents and her husband, Chris Ward, claim Academy should not have sold a firearm to Kelley in Texas because he listed an address in Colorado Springs on a firearm record form. The suit claims the rifle should have been sent to his residence in Colorado. Instead, the suit alleges, Kelley was able to walk out of the San Antonio Academy store with the rifle used in the shooting.