A 10mm Auto for big-game hunting 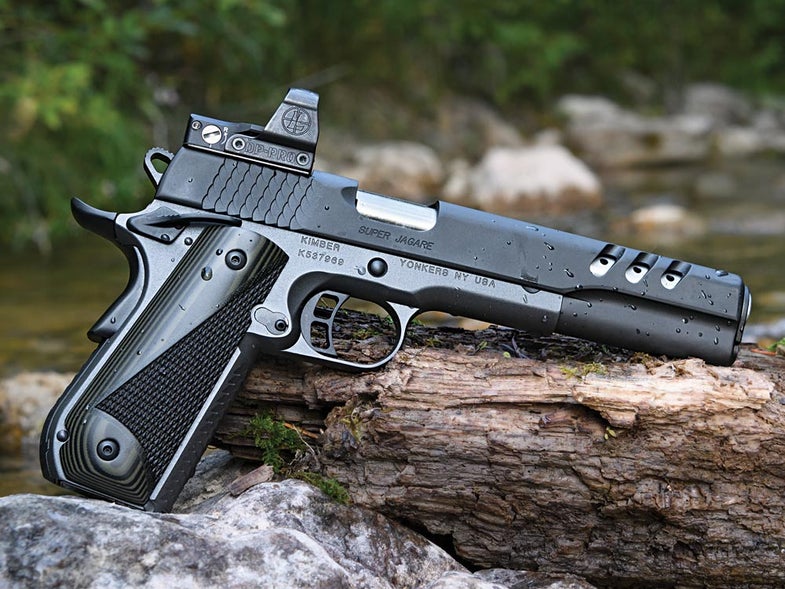 As with most semi-auto pistol cartridges, the 10mm Automatic was developed for gunfighting and personal protection rather than hunting or general recreational shooting. The FBI adopted the round in the wake of the infamous Miami shootout in 1986 that left two FBI agents dead and several others wounded. The inability of the eight agents in the gun battle to quickly stop two heavily armed criminals caused the FBI to reevaluate how they armed and trained their agents.

But the 10mm Auto was a bit too much gun for the rank-and-file FBI personnel, and the agency soon backed away from this potent round. However, the underlying criteria that the FBI wanted from the 10mm Auto—the ability to defeat tough barriers like clothing, automobile glass, sheet metal, and drywall, yet still penetrate deeply into a body with reliable bullet expansion—make the round attractive for hunting big game. Kimber’s Super Jagare is one of the newest 10mms built specifically for pursuing four-legged critters. It comes configured ready to take afield, and it has a number of smart design features that handgun hunters will appreciate.

The Super Jagare is a single-stack 1911 with an ambidextrous thumb safety and an oversize beavertail grip safety. It comes with a long, 6-inch ported barrel and a Leupold DeltaPoint Pro reflex sight affixed to the rear of the slide. Six-inch barrels are pretty standard on hunting semi-auto pistols. They generate a bit more bullet velocity and help reduce felt recoil and muzzle flip. The porting on the Super Jagare does even more to tame the 10mm’s recoil, though at the cost of additional muzzle blast and noise.

Kimber rounded off the bottom of the grip, only partially checkered the pistol’s Micarta stocks, and machined a very mild checkering pattern into the front and back of the stainless-steel frame. These touches keep the gun from chewing up your hand under recoil as well. Overall, the Super Jagare is pleasant to shoot and not difficult to control.

The Leupold DeltaPoint is one of the best reflex sights on the market. The aiming point is large (it subtends 7.5 MOA) and easy to see. The lens, generally a weak point with reflex sights, is surrounded by a tough steel housing that makes it more durable and able to withstand a beating.

It only took me a few rounds to zero the pistol at the range. The sight comes with two exposed dials to adjust for elevation and windage, and I soon had the Super Jagare dead-on at 25 yards, printing nice, small groups.

I quickly got bored shooting paper at that distance and transitioned to steel at longer ranges. Shooting offhand from a kneeling position, off shooting sticks and using various supports, I was able to consistently ring 8- and 10-inch steel plates—good proxies for a deer’s vitals—at distances from 50 to 100 yards.

The pistol shot all of them well, though the best accuracy came from the Federal JSP, which turned in an average 5-shot group size of 1.731 inches at 25 yards off sandbags, with the smallest group measuring 1.041 inches.

The DeltaPoint is very forgiving, since it lets you keep your eyes on the target instead of focusing on a front sight. And, like other reflex sights, it can be very quick too, though you need to do a lot of dry-fire practice to develop that speed. Without that practice, you can find yourself hunting for the red dot when you’re trying to get the pistol up quickly, and it is part of the reason I’d caution against relying on the Super Jagare for backcountry protection against bears.

Another piece of advice if you plan to hunt with a pistol sporting a reflex sight is to take along a good supply of lens cleaners and wipes. Even though the Super Jagare comes with a rubber cap for the Leupold, the lens still gets grungy quickly. After cleaning and lubricating the gun, for instance, the first couple of shots through the pistol splattered the sight with oil, rendering it almost useless.

The trigger on the pistol was crisp, though a bit heavy at 5 pounds 3 ounces. My preference would be to lighten it up by a pound or so for better precision.

Mechanically, the pistol worked great. The ambidextrous safety functioned very well, which isn’t always the case for left-handed shooters such as myself using 1911s. The pistol also ejected the empties in a very consistent fashion, as I learned early on in the evaluation. It would spit the brass directly into the thumb of my left hand, which I normally keep in a high neutral position above the safety, with every pull of the trigger. By modifying my grip and stacking my thumbs along the frame I was able to avoid getting stung, but it took me a few minutes to fix the nice little flinch I had developed.

The charcoal-gray finish on the Super Jagare is as tough as nails, and the Micarta grips are nigh indestructible. Combined with the reliability of a well-built 1911, which is an apt description of this Kimber, the Super Jagare is a hunting tool that can keep up with you no matter how rough the going gets.