Understand Your Shotgun’s Point of Impact to Hit More Birds

What exactly is the point of POI? 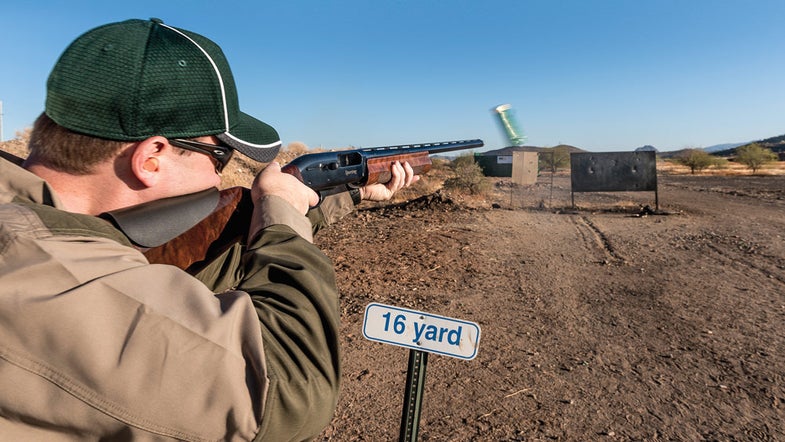 After installing a cheekpiece, a bird hunter checks his shotgun's POI on a range in Arizona. Yamil Sued
SHARE

What are the odds you’d buy a brand-new rifle, mount a scope on it, and head out to the field without ever having sighted the gun in at the range? It seems like a silly question, but in essence, that’s what most of us do each time we pick up a new shotgun. We assume that each shotgun shoots the same way, but nothing could be further from the truth.

A shotgun’s point of impact, or POI, is measured as a ratio of the percentage of shot that rises above the line of sight when the gun is mounted to the percentage of the shot charge that remains below the line of sight. If these two percentages are roughly equal, then your gun is said to shoot 50/50, or flat. Trap guns usually shoot 70/30, so the bulk of your shot string impacts above the rib, which makes sense in a discipline where virtually every target is climbing away from the shooter. Sporting shotguns that are designed for other applications, like sporting clays, skeet, and trap, often shoot 60/40. And most guns shoot a 50/50 horizontal pattern, meaning that half the shot clusters to the left of the target and half to the right. But unfortunately that isn’t always the case.

So whether you’re chasing the Grand American title or doves in a sunflower field, it makes sense to know your gun’s POI.

Yes, this is yet another shotgun article where the author directs you to pattern your gun. But before you shrug off the idea, understand that this will make a difference in your long-term shooting success. In most cases, you don’t really need to count pellets—a 30-inch circle target with a dot in the middle will immediately give you an idea of where you are patterning without counting each and every hole. Shoot three or four targets at 25 yards and you’ll have an even clearer idea of exactly what’s happening. Make sure your mount and sight picture are consistent. A Full choke will typically give you a tighter pattern, which makes diagnosing POI easier.

Some new shotguns come with shims that can change POI, or you might have a target model that has an adjustable comb or rib that allows you to transfer your point of impact. Shims also allow you to adjust cast if you are shooting to the left or right.

But even if you don’t have a shotgun with shims, there are options. If you want to raise the point of impact, you can raise the comb. Do this by installing an adjustable comb or adding a product like a Cheek-Eez pad from Kick-Eez. You can also raise POI by lowering the front sight.

If you’re trying to lower the POI, you’ll need to either lower the comb or raise the front bead. Adding an aftermarket front bead like HiViz’s CompSight can easily accomplish this. And if you have a wood stock, you can sand the comb height and refinish.

Experienced gunsmiths can rehead the stock, adjusting the angle at which the stock meets the action, or bend a wooden stock. Some gunsmiths can also bend the barrel of a pump, single-shot, or autoloader, but double-barreled guns typically require relaying and resoldering.

Read Next: 5 Tips for Shooting a Shotgun Better and Faster

Lastly, some gunsmiths will hone the muzzle or choke tube by relieving it so gasses escape sooner from one side. This causes POI to shift in the direction of the honing.

Which option you choose depends on your taste, budget, and access to a qualified gunsmith. The good news is that altering your shotgun’s POI can lead to more accurate and consistent shots.