Gun News of the Week: SHARE Act Passes Out of Committee, Is Formally Introduced 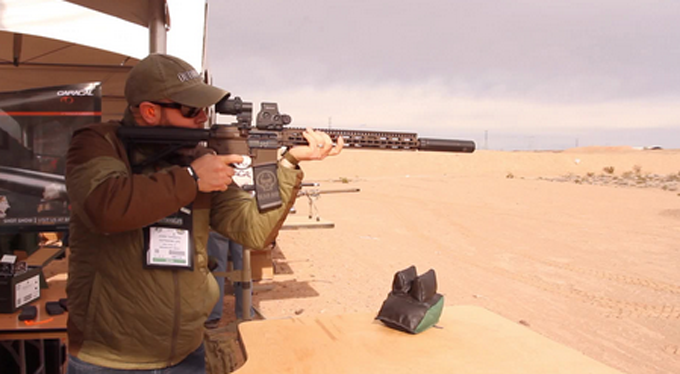 SHARE Act Passes Out Of Committee And Is Formally Introduced

The Sportsmen’s Heritage and Recreational Enhancement (SHARE) Act has been formally introduced in the 115th Congress after it passed through the Natural Resources Committee on Sept. 13.

The SHARE Act, HR 3688, is a legislative priority of the bipartisan Congressional Sportsmen’s Caucus. It is a sprawling Omnibus bill that includes several components that have generated attention and some controversy.

Most notable among them:

— The proposed Hearing Protection Act, HR 367, which would eliminate the $200 transfer tax on suppressors by dropping them from NFA rules, but would still require they be purchased through a federal firearms licensee after a background check. They would essentially be regulated as a firearm.

The bill, submitted by Rep. Jeff Duncan (R-SC) in January, has 159 co-sponsors and is in the House Ways and Means, and the House Judiciary committees. The Senate version is the Silencers Help Us Save Hearing (SHUSH) Act, S 1505.

— The Lawful Purpose And Defense Act, HR 2620, would replace the phrase “sporting purpose” with the term “lawful purpose” in the Gun Control Act and limit the authority of bureaucrats to interfere with the importation of firearms and firearm parts.

— Pittman Robertson Modernization: According to Jeff Knox, director of The Firearms Coalition, the SHARE Act includes “long overdue” reforms in updating the way Pittman Robertson funds — money generated by excise taxes on firearms, ammunition, some fishing equipment and other outdoor gear — can be utilized for land acquisition and range development. these updated provisions also propose to better the protections afforded to people transporting firearms and/or ammunition through areas with tight restrictions.

“Another provision would lift the ban on firearms on federal lands managed by the Army corps of Engineers,” Knox writes. “There are also protections for ammunition and fishing gear that is made of lead, and provisions to open more federal land up to hunting, fishing, and other recreational opportunities.”

The SHARE Act also includes a provision added by Rep. Liz Cheney (R-Wyo.) that would preempt courts from issuing rulings that would re-list grey wolves from Endangered Species protection.

“We’ve really been in a situation for too long where the environmental groups have really been able to exploit the legal system so there are a number of crucial titles in the bill that will begin to prevent that,” Cheney said.

— Congress Goes for Its Guns

— Treat hunters with respect, not condescension

Nationwide sanity in standardizing concealed carry laws secured pivotal support on Sept. 8 when Rep. Rob Goodlatte (R-Va.), chairman of the House Judiciary Committee, signed on as a co-sponsor of HR 38, The Concealed Carry Reciprocity Act of 2017.

Introduced in January by Rep. Richard Hudson (R-NC) and currently idling in the House Judiciary Committee, HR 38 now has 212 co-sponsors. According to an NRA statement applauding Goodlatte’s endorsement, “its prospects in the House are looking better with each passing week.”

The Senate version of the bill, S 446, The Constitutional Concealed Carry Reciprocity Act of 2017, was introduced in February by Sen. John Cornyn (R-Texas) and has 37 co-sponsors. It has been read twice and is currently in the Senate Judiciary Committee.

“Law-abiding citizens should not forfeit their Second Amendment rights simply by traveling to another state. The premise of HR 38 is simple — if you are eligible to carry a concealed firearm in your state of residence, you should be able to carry a concealed firearm in another state that allows individuals to do so,” Goodlatte said in a statement. “This bill does not impede upon or change the authority of state and local governments to decide where citizens may or may not carry firearms. Protecting our Constitutional rights is the greatest responsibility of any member of Congress, and this includes protecting the right of law-abiding citizens to legally carry firearms to ensure safety for themselves or their family. I look forward to working toward the passage of HR 38 in the House.”

The NRA and other civil rights groups are requesting that gun owners and others interested in creating a uniform, nationwide standard regarding concealed carry instead of the current chaotic matrix of local and state laws contact their U.S. Senators and U.S. Representative and urge them to cosponsor and support passage of HR 38 and S 446 by calling (202) 224-3121 or by clicking here.

— Bill would up penalties for gun theft from FFLs, set mandatory minimums

Everytown — AKA Bloomberg — Gives $1M To Anti-Gun Candidates In Virginia

According to The Washington Post on Sept. 7, Everytown will contribute $700,000 to the campaign of Democratic gubernatorial candidate Ralph Northam. Everytown — aka Bloomberg — is gifting $450,000 directly to Northam’s campaign and another $250,000 on campaign mailers to support him.

Northam is opposed to concealed guns being carried without a permit. He also favors a ban on assault weapons, expanded background checks and a limit on handgun purchases each month.

In addition, Everytown — aka Bloomberg — has committed $300,000 to Attorney General Mark Herring for his re-election bid. Herring is a gun control zealot and now in Everytown’s — aka Bloomberg’s — pocket without shame.

According to Politico, Bloomberg contributed at least $65 million to national, state and local campaigns in 2016. Among those expenditures is the $25 million spent by Everytown — aka Bloomberg — to state gun control measures in Nevada, Maine and Washington State.

— How the Washington state legislature has tried to reduce gun violence

In February 2016, however, a three-judge panel of the U.S. 4th Circuit Court of Appeals vacated a lower-court ruling upholding Maryland’s 2013 Firearms Safety Act (FSA) and, in March, agreed to hear the challenge—Kolbe v. Hogan— becoming the first appeals court to apply “strict scrutiny” to firearms regulations.

On Feb. 20, 2017, however, the full 4th Circuit Court voted 10-4 to uphold the Maryland FSA’s “assault weapons” ban, stating the Second Amendment doesn’t protect a right for citizens to own “weapons of war.”

In its 116-page decision, the court found the law banning certain semi-automatic firearms — such as the AR-15 — and limiting magazine capacity to 10 rounds to be constitutional, overturning a ruling by a three-judge panel of the same court last year which held the opposite viewpoint.

Despite the defeat, Kolbe v. Hogan lives on and there remains some hope that it could eventually be litigated before the U.S. Supreme Court. Maryland Shall Issue, one of the plaintiffs in the case, appealed the FSA requirement that a license is needed to legally purchase a handgun.

On Sept. 4, Federal District Judge Marvin Garbis ruled that Maryland Shall Issue’s suit against the FSA could move forward after denying the bulk of the state’s dismissal request.

In his ruling, Garbis said the plaintiffs have standing to bring their case against the state’s Handgun Qualification License (HQL) and ordered discovery in the case to move forward.

“Accepting the pleadings as true, the court finds that the plaintiffs allege adequate facts to present a plausible claim that the HQL provision and regulations have deprived them (or their members or customers) of the Second Amendment right to possess a handgun in the home for self-defense,” Garbis wrote in his ruling. “Accordingly, Count 1 shall not be dismissed.”

“It’s redundant as to the current law which already commands that background check to be done,” Mark Pennak, president of Maryland Shall Issue, told the Washington Free Beacon. “The whole idea, and I think this was the underlying intention, was to discourage, as much as possible, the exercise of your constitutional right to buy a handgun.”

Pennak said the ruling was just the beginning of litigation. “These rulings were an important first step in the suit,” he told The Washington Beacon. “From here, the parties will move into the discovery phase of the litigation, which promises to be both expensive and very interesting.”