This fly works on any species during any season 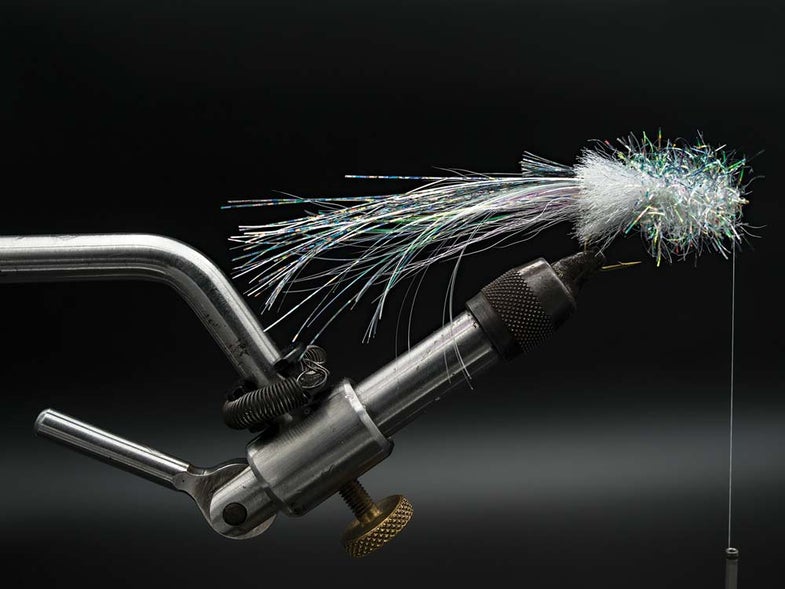 What do my personal-best brook trout, smallmouth bass, and northern pike have in common? They ate a Murdich Minnow. What fly do I throw at trout in the sky-blue lakes of Chile with just as much confidence as I do in the small, tannin-stained rivers of Wisconsin? A Murdich Minnow. Simple to tie and easy to customize, this baitfish imitation was originally developed as a striper fly, but today it catches any fish that enjoys a meal of fish flesh. The best news for the angler? It’s almost as easy to tie as it is to cast.

Select a clump of relatively straight deer-hair fibers from the top half of a bucktail. This clump should be a little less than the width of a pencil. Lash the hair fibers down right at the bend of the hook shank, then add body to the fly by tying down the remaining material along the shank, leaving space near the eye. Return your thread to the tie-in point.

Select your first layer of flash, again taking pains not to overdress the fly. I like to use a subtle pearlescent Flashabou for this step. Cut these fibers to a length just about ¼ inch beyond the tips of the longest bucktail fibers.

Now it’s time for the top layer of flash. This should be something that contrasts subtly—or not so subtly—with the white bucktail and pearl flash below. Speckled silver Flashabou is a classic choice. Trim it to a length just a ¼ inch longer than the first layer of flash. Leave the excess at the other side of the hook uncut and pointing forward.

The most difficult part of making this fly is applying two equal-size clumps of EP Fibers along either side of the hook shank. This gives the fly both profile and bulk that results in an erratic action. Once both clumps are secured, take that excess flash from Step 3, fold it backward over the fiber, and trim.

All that’s left to do is wrap the hook shank with some sort of long-fibered palmering material. Here, it’s white Estaz. Stroke the fibers backward with your left hand as you wrap forward with your right to produce a neat, tight body. Whip finish and you’re done.

Tips for Fishing the Murdich

As you would with any streamer, spend a minute swimming the fly boatside to see how it moves with different rod and line-hand actions. Once you start fishing, cycle through a few different retrieve styles until you start to catch fish on one, then commit to it.

One of the pleasures of fishing an unweighted, flashy fly like the Murdich is how easy it is to track during the retrieve. But don’t get tunnel vision on the fly. Instead, imagine your fly as the center of a Hula-Hoop, and watch the whole hoop for following fish. The ability to see a follower, discern its interest, and adjust your retrieve to induce a bite is part of what makes fishing the Murdich so effective.

Unless you’re fishing it deep on a sinking line and counting it down to depth, start fishing the Murdich immediately after it lands. After all, baitfish don’t fall from the sky and sit there in the film. Instead, make sure the first strip of the fly happens almost simultaneously with splashdown. This means good line control throughout the cast. If you’re the type who’s always unwrapping your fly line from around the reel or rod handle after the cast, you’re going to want to fix those problems to fish this fly most persuasively.

A mostly synthetic fly like the Murdich sometimes needs a little help getting through the film and into the water column, especially if it’s a fresh tie. In such cases, a gel sinking agent like Loon Outdoors Henry’s Sinket is your friend. Apply it once every time you tie on a new Murdich.