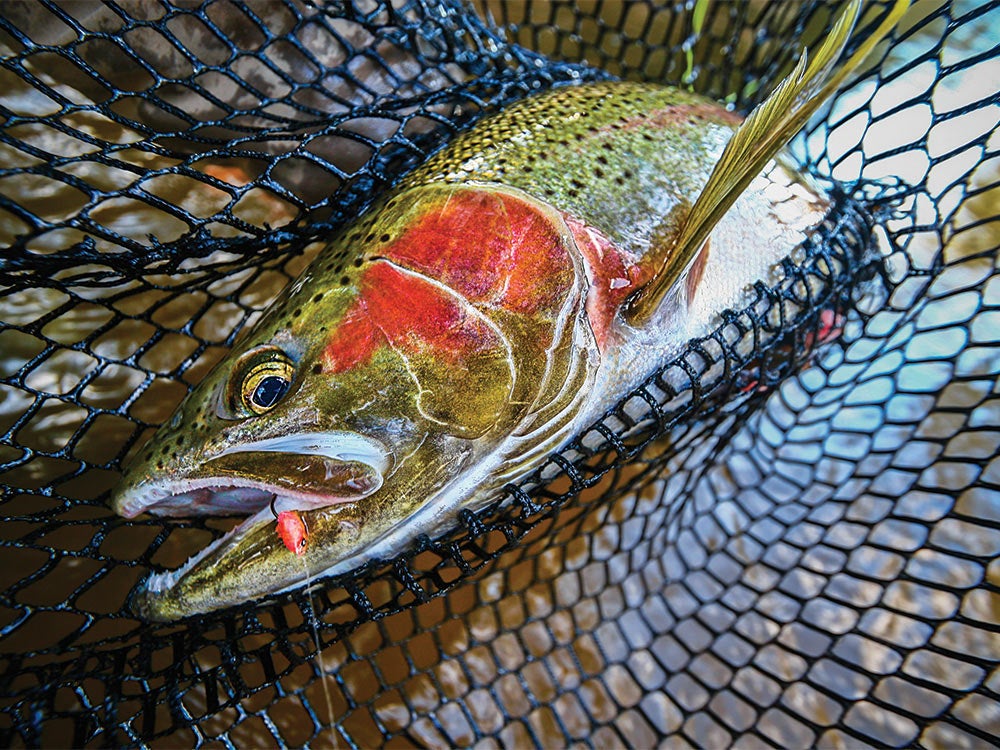 In the mind of many West Coast flyfishermen, you can’t call a steelhead a steelhead unless it’s had saltwater running over its gills. By the book, that’s accurate. Make this quip to one of the thousands of fly guys who live for the cold chill of the Great Lakes steelhead season, and most will tell you where you can stuff that book. Implanted or not, the chromers that run the Great Lakes tributaries from Minnesota to New York peel as much line and jump as high as their Pacific kin. For many flyfishermen, the ultimate thrill is getting one to hit a streamer on the swing. The reality is that from the beginning of the run, all winter long, and even when “drop-back” steel return to the lake in spring, nothing will catch them more consistently than an egg fly. The tricky part is that, with near-endless egg options in shops, it’s easy to get lost in the Technicolor fly bins. Don’t get overwhelmed. These tips will help you tighten up your egg arsenal for any Great Lakes trib.

Anyone who tells you there is a be-all-end-all egg color that never fails is full of it. I’ve had days when light pink outfished everything else. The next day it wouldn’t get touched; chartreuse was the top producer. The day after that, the fish would hit any color egg I drifted. Hot colors can change by the hour in steelheading, but the trick to making sure you have the right color on hand is to stop worrying about color and think in tones. I break down egg flies into lights, brights, and darks. For example, baby pink, tan, or pale peach would fall under light, chartreuse or fluorescent orange under bright, and blue or deep red under dark. Generally speaking, sunlight and water-clarity conditions dictate a hot tone, and as long as you have a small variety of eggs in each category, you’ll find one that’s going to get bit more often than all the others. If it stops getting chewed, change colors within that tone before branching out into a different category unless you’ve noticed a big condition change, like clouds giving way to bright sun.

It’s not uncommon to find egg patterns that feature blood dots or yolk dots. Working a small clump of red egg yarn in with the predominant color yarn is one way to create these dots at the vise; when the egg is trimmed, a tiny red bull’s-eye remains in the center of the pattern. Some anglers believe this small pop of contrasting color makes an egg more visible, while others simply believe it makes an egg look more realistic. There have been occasions when I noticed a difference in action on dotted versus undotted eggs, though in my experience, it’s rare. I tend to tie my eggs in single colors, but I do always carry red and orange Sharpies when I’m steelhead fishing. If a buddy is outfishing me with dotted eggs or I just want to give fish in a worked-over hole something slightly new to look at, I find it easier to simply dot an egg or two as needed.

Read Next: How to Catch More Steelhead

Insane for the Membrane

I’m not sold on the potency of many iterations of the egg, but one accoutrement I have bought into is a membrane. Any steelhead shop worth a lick will carry a variety of patterns that feature wispy strands of longer fibers veiling the egg. Most of the time this veil is lighter in color than the egg itself, and it’s designed to mimic a piece of the membrane that encases natural salmon and steelhead eggs. In the water, this false membrane breathes and flutters around the egg pattern, and while it’s not always a ringer, I’ve been on steelhead rivers several times where eggs with membranes outproduced those without nearly 10 to 1. Membraned eggs work any time during the run, but I find them most effective early in the season in rivers with a heavy spawning salmon population, and in the dead of winter when lethargic steelhead need an extra hint of action to trip their triggers