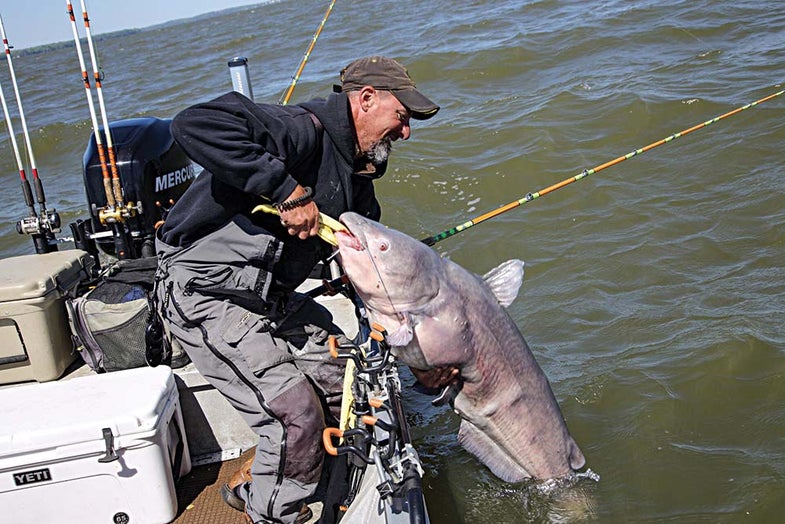 Cold weather, current-scoured river holes, and giant blue catfish—it’s a combination that’s been targeted by veteran catfish fanatics for decades. Indeed, some of the biggest blue cats in the world are caught each winter in just such places at just this time. The 40- to 50-foot depths of the Cumberland, Tennessee, Mississippi, and Ohio rivers are some traditional blue-cat hotspots.

There is, however, another way to skin a cat, and Kansas guide Ryan Gnagy believes his tactics for taking huge blue cats in shallow water will work in reservoirs around the country. It’s hard to argue with his success.

“It’s not uncommon for us to have 40-fish days, with 10 or more weighing 30 pounds or more,” says Gnagy, who has caught blues weighing more than 50 pounds from water as shallow as 15 inches in late winter. “And I don’t think you can ever fish too shallow when the bait and the blue cats are up at that time of the year.”

“Everywhere you have reservoirs with expanses of shallow flats and you have blue catfish, you’ll have that kind of excellent shallow, late-winter fishing,” says Jeff Williams, owner of Team Catfish, an Oklahoma-based catfishing gear company. “It’s a great fishing pattern that happens year after year, and it’s not too complicated. Just about anybody can get out and do it.”

Gnagy, owner of Prime Time Catfishing service, at Milford Reservoir in Kansas, credits the water turbidity created as heavy winds blow into the shallows for the hot bite. The dark sediment in that water holds heat much better than does clear water. The lake’s blues follow schools of big gizzard shad that head to the shallows for the warmer water to feed.

Williams, who’s fished the pattern in at least eight states, from Virginia to Texas, says the blues will also head shallow to feed on small shad that have died from shock as a lake’s water cools and warms. Many get trapped under the ice and are washed to the shallows.

Both anglers say blue cats can be found in such windswept shallows—10 feet deep or less—within just a few hours after ice-out.

While some catmen drift the shallows, dragging baits until fish are found, others prefer to anchor up and fan-cast to various depths until a bite pattern emerges. Gnagy relies heavily on side-scanning sonar to begin his search for fish concentrations. Once catfish are located, he’ll drift along at a snail’s pace, utilizing an electric motor or drift sock to control his speed. When conditions are right, he’ll spend most of a day casting baits into water a few feet deep.

Although the fishing is not necessarily complicated, the best baits are often unusual. Some fishermen use chicken breast or thigh meat marinated in a secret homemade sauce. Oily pieces of snow goose entrails, chunks of Asian carp, or skipjack herring are also favorites. But Gnagy opts for native species.

“You can’t beat fresh cut shad—ever,” he says. “And it’s got to be stuff that’s never been frozen. That’s what the blues are already feeding on, and what they’re hungry for.” Using sonar to locate bait schools, Gnagy cast-nets his fresh bait. The shad are then cut in to 2- to 3-inch chunks and impaled on hooks as big as 8/0. His main line is comprised of 80-pound-test braid. A sturdy barrel swivel connects the braid to an 80-pound-test monofilament leader. A 2- to 3-ounce weight sits above the swivel, rigged so it can slide freely. Most of his fishing rods are 8 feet long, and stiff enough to shoot a game of billiards.

Land of the Giants

The day may come when anglers will need even heavier tackle, because America’s blue cat fishery is growing, both in quality and quantity.

In 2001, the world-record blue catfish was an Arkansas fish that weighed 116 pounds 12 ounces. That record was broken at least four times before the current record of 143 pounds was caught in 2011 on Lake Kerr, in Virginia.

Williams believes it’s only a matter of time before that fish is topped, maybe by several pounds. When it happens, it’ll probably come from a reservoir because the waters are so fertile and food sources are so abundant.

In many places, 50- to 70-pound blue cats have become so common, many don’t warrant a photo before they’re released. But don’t worry, says Williams. There are plenty of smaller blue catfish out there for those who want a dinner or two for their efforts.

“Fisheries biologists have done a really great job of stocking blue catfish in reservoirs where they weren’t already native,” says Williams. “States are also starting to protect those really big fish with limits of maybe only one per day of more than 30 to 35 inches.” Most follow the unwritten code that only fish under 10 pounds can be kept.

“There are a lot of fish that size out there that people can enjoy eating,” he adds. “And at the same time, anyone fishing for them has the very realistic chance of catching one that’s 50 pounds or bigger.”

And the opportunity to catch them may never be better than in shallow water, in the late winter.