10 Spring Trout Flies You Must Fish

The world of flies for trout fishermen is limitless. If you can dream it up, someone can tie it. But... 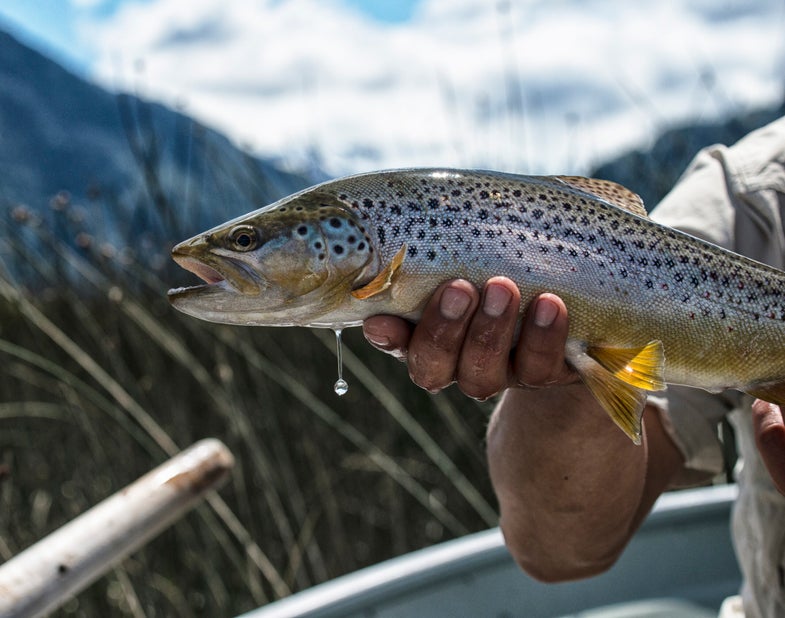 The world of flies for trout fishermen is limitless. If you can dream it up, someone can tie it. But you don’t need all the flies in the world to catch trout this spring. Here’s our roster of the 10 flies to have in your vest whether you’re chasing giant springtime brown trout, finicky brookies, or anything in between.

What It Is: Spring is streamer time, and if you’re fishing from a boat, there probably isn’t a fly in the catalog with as much swerve and flair as Tom Lynch’s D&D. What makes this fly act all drunk and disorderly is the wedge deer-hair head. The angle comes from the fact that the hair is spun on a jig hook with anywhere from a 30 degree to 90 degree bend—the more severe the angle, the wilder the moves. On the other end of the fly, the rear flank feather speeds up the flow of water, ensuring the marabou tail kicks out aggressively with every motion the angler imparts to it.

How To Fish It: Don’t even think of fishing this fly on a floating line—the spun deer-hair head and absence of weight of any kind means it’ll just skid and skate on the surface in a way that no trout (or pike, or bass) would recognize as food. Instead, throw this fly on a sinking line with a head length commensurate to the type of water you fish (somewhere in the 20-foot class for smaller rivers all the way to 30-foot heads for larger bodies of water). This is definitely a boat fly, since to fish this fly most effectively, boat control is important: the angler and fly need to move at more or less the same speed. That’s because the D&D gets its action by bucking and pulling away from the sink tip like a bronco when the fly is paused—provided it pauses on a slack line. For the same reason, a longer-than-usual streamer leader will add more action to the fly. Throw as long a leader as you can handle.

What It Is: While there are a lot of variants of the Circus Peanut, the basic elements are marabou, rubber legs, dumbbell eyes, and articulation (the very first Circus Peanut prototype was two wooly buggers strung together with a bit of wire). Play with your color schemes—light, dark, solid colors, blended colors. And be sure to tie a few that are the same color as your local river bottom.

How To Fish It: While the Circus Peanut fishes great from a boat with a sinking line, it’s also a primo option for the wading angler who wants to throw a larger offering. That’s because wading anglers can’t always choose their angle of approach and presentation, and it’s best to throw meat that can be fished in a lot of different ways: stripped, swung, even dead-drifted. Tied in the round and with plenty of passive action, the Circus Peanut fits that bill and then some—it’s one of those flies that trout just love to wack.

What It Is: All-flash all-the-time is what you get with the Kreelex. It’s as castable a weighted fly as you can hope to get, and a great fly to throw early and late in the day, as well as during the high water so typical of spring. Tie a few in different color schemes and sizes. It’s also a great smallmouth fly in case your local trout water boasts some bronzebacks as well.

How To Fish It: The Kreelex is the small-stream fly angler’s answer to the Panther Martin—great for calling fish out of logjams and undercuts. Fish this on a floating line with a tapered leader and you’ll have the entire water column at your disposal. Swing it through fast water while shaking your rod tip to make your fly pulse and flash through the riffles. Or stack mend it down to depth in a deep run before giving it a few aggressive strips.

What It Is: Bright green synthetic fibers represent a chunky caddis freshly busted from its case and riding an air bubble to the surface. As with many caddis emerger patterns, this offering does not need to be tidy and trim—buggy and messy is good. Buy or tie a few with a tungsten bead for fishing down deeper in swift runs.

How To Fish It: There aren’t many things more relaxing—or effective—than swinging wet flies in the spring. If your water has caddis coming off in any quantity at any time of the day, swinging a caddis pupa soft hackle is a great way to cover water and fish quick water efficiently in the hours leading up to the emergence. Be sure to throw in occasional deep swings by stack mending at the start of a cast. The fish you catch will generally get larger in size the deeper down in the column you fish. Be ready anything when swinging a soft hackle pupa. Trout bust them with a vengeance.

What It Is: The San Juan worm is so easy to tie you can whip up a whole arsenal in different colors and weights in a matter of minutes. You can cut your chenille straight, but I like to feather the ends of the chenille with a flame from my lighter to give my worm a tapered look. I’m certain the fish don’t care, but it makes me feel a little better about fishing, you know, a worm.

How To Fish It: There’s no shame in matching the hatch with worms after a good spring soaking. While the San Juan works great as a nymph fished on an indicator, this is a pattern that also fishes well short-line nymphed (since after rain events in stained water you can get pretty close to the slots you want to fish). Also, if you’re a wading angler swinging weighted streamers when the river is up and muddy, the San Juan makes a great dropper.

What It Is: Always trust a fly that rhymes with itself. Or maybe just trust this one. The subtle motion and sneaky iridescence of the peacock sword fibers are perfect for often the stained water of spring, as is the inherent meatiness of the Zug—it gains bulk from a tapered underbody of non-lead wire.

How To Fish It: The Zug Bug is made to fish deep, where its dark color and meaty profile help it stand out. The contrast of mallard flank wing-case also functions as a kind of hot spot that gets fish’s attention. Fish the Zug Bug with an indicator as close as you can to the bottom in deep, slow holes.

What It Is: It should come as no surprise that this most Wisconsin of nymphs was named after an alcoholic beverage. There are many variations of the Pink Squirrel (the depicted pattern is my own heretical but very effective incarnation), but what they all have in common is a pink hot spot.

If you need something to drink while you tie them, the original cocktail as invented in Milwaukee is as follows: 1 oz. Creme de Noyaux (substitute Amaretto); 1 oz. Creme de cacao; 1 oz. Heavy Cream

How To Fish It: While most might be inclined to think of the Pink Squirrel as an attractor nymph, pink is actually a hue found in pregnant scuds, so there’s a case to be made for imitation as well. Don’t for a moment think of this only as a trout nymph, either. It also happens to be one of my go-to spring steelhead nymphs, perhaps for its passing resemblance to a salmon egg. Whatever the case, fish just love it, whether drifted under an indicator or short-line nymphed.

What It Is: If you fish spring creeks you should carry midges all year-round, plain and simple. The Zebra midge is a pupa pattern generally tied between size 18 and 22 (I usually fish a 20). Midges make an effortless dropper on a prospecting dry fly, and will take fish in just about any current situation—I regularly marvel at a trout’s ability to find and gnosh a size 20 nymph in quick water.

How To Fish It: While the zebra midge is often fished as a second fly in a two-nymph system, it’s also very effective much higher up in the water column. It makes a great dry fly dropper fished a foot beneath the surface, and I’ve had a lot of success using this pattern when fish are taking emergers and adults on the surface (good news because size 20 midge dries are a pain to tie). Because the glass bead doesn’t sink, all you need to do is apply a dab of gel floatant to the body of this fly and it’ll float in the film or just below. Use a size 16 Adams or caddis as a subtle indicator.

What It Is: Spring is caddis time just about everywhere in North American trout-dom, and my favorite caddis pattern of all time is definitely the CDC and elk (though I tie mine with deer hair). The CDC adds floatation and a bugginess that fish can’t resist, whether they’re taking emergers of full-on adults. This is a fly that only fishes better the more busted it gets.

How To Fish It: In addition to hatch-matching situations, the CDC and elk also a great search fly for calm water, since the CDC fibers catch a ton of air, which makes for soft landings. Coupled with a tuck cast and an extra foot of tippet, this thing touches down as lightly as any feather out there. That said, it’s definitely not just a calm-water fly. If you don’t think of CDC as a viable rough-water floatation agent, think again. I’ve fished alongside anglers on brawling mountain rivers in Europe who were crushing fish on CDC and CDC caddis (CDC body, CDC wing). Learn to use this fiber and you’ll catch more fish.

What It Is: A few weeks ago I was parking riverside when a big beetle thudded onto the hood of my truck. It was April in Northern Michigan, which means there was still snow on the ground, yet here I was flicking a size 8 beetle off the hood. Most people start waiting too long into the season before fishing terrestrials, even though beetles and ants make great spring afternoon prospecting flies when the sun is out midafternoon and there aren’t any emergences going on.

How To Fish It: Foam beetle patterns are particularly great prospecting flies since they can suspend any number of weighted nymph droppers. But for the spring days that are just too perfect to fish anywhere but up top, try fishing a non-foam ant dropper. That’s right, fish your ant wet–because ants can’t swim, remember? Simply do away with the floatant and your ant will be just below the film in no time.