The DOI’s proposal to temporarily close non-local and non-resident caribou hunting on some federal lands in Alaska, except to qualified subsistence hunters, doesn't seem rooted in herd management goals 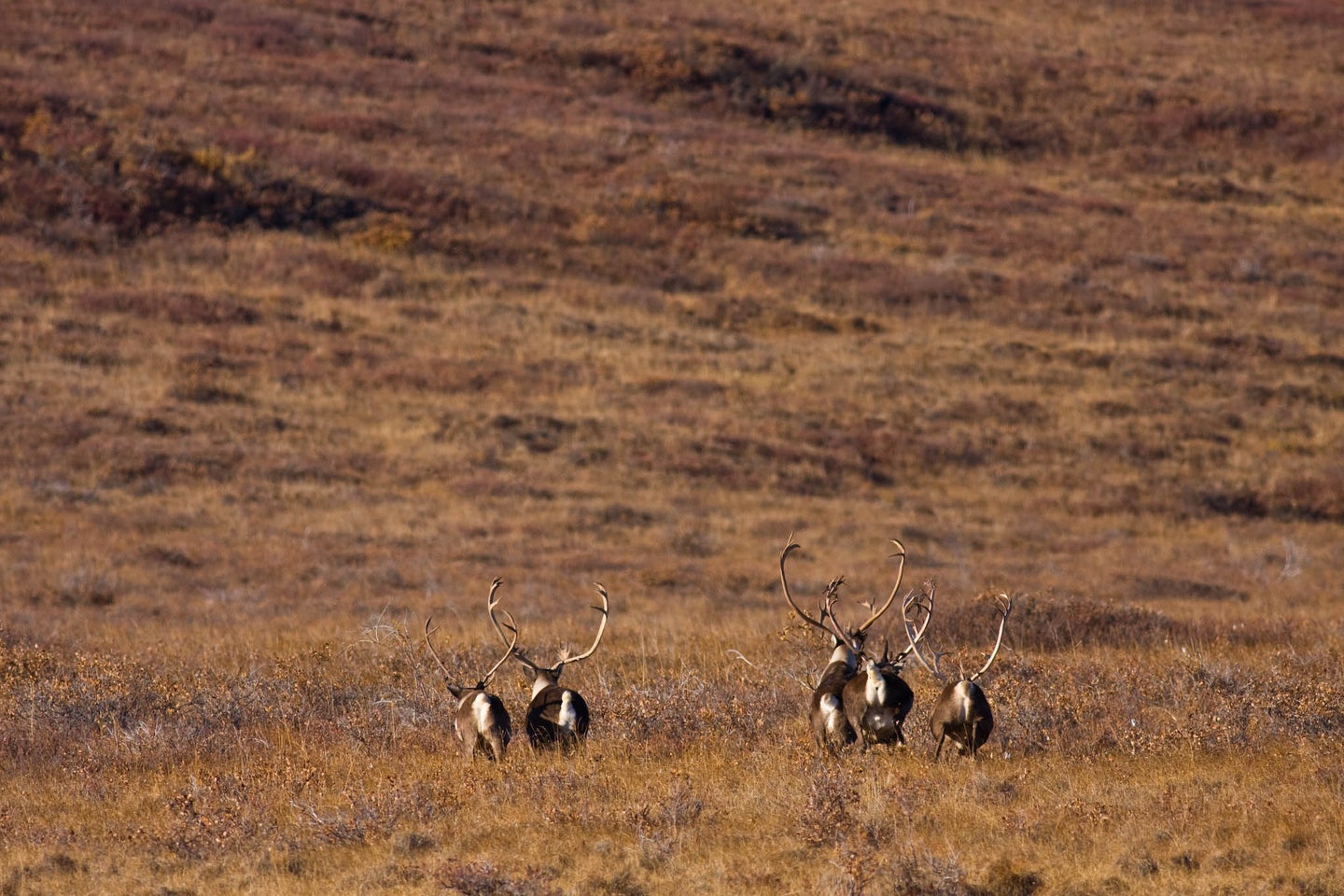 Would you believe that one tele-meeting on April 23 stands between would-be caribou and moose hunters and their access to nearly 60 million acres of public federal land in Northwest Alaska? It’s an issue that hasn’t made waves until now, but it’s one hunters should know about.

The forthcoming public hearing was announced Friday by the Department of the Interior for public consideration of Temporary Wildlife Special Action Request WSA21-01, which would close all federal lands within Game Units 23 and 26A to moose and caribou hunters who aren’t “federally qualified subsistence users” from Aug. 1 through Sept. 30, 2021, which happens to coincide with the non-resident hunting season for caribou in Unit 23, and most of it in Unit 26A.

Think this won’t happen? Close to 1.5 million acres of BLM land in unit 13 were also just closed in 2020 to “non-qualified” users for caribou hunting. Here’s some background on the issue, and which hunters are affected.

Many Stakeholders, Many Opinions

Many of us take for granted our “ownership” of federal lands, and often, wildlife management and non-resident restrictions crop up at the state level. Alaska has also been at the center of public lands debates, such as the rollback of federal regulations, like prohibiting some state-sanctioned predator control and subsistence-hunting practices on federal lands, controversy surrounding potential oil development in part of the Arctic National Wildlife Refuge, and other mining and resource development issues.

It’s also becoming more common for large swaths of federal land in Alaska to close to certain big game hunters who aren’t a federally qualified subsistence user. Many federal lands in Alaska are not only managed by state regulations, but by federal subsistence regulations as well. Those define a qualified subsistence user as any Alaska resident who lives in a rural area. The federal regulations outline nine “non-rural” areas in Alaska, and if you live within those boundaries, you don’t qualify; neither do non-residents. Generally, Alaska’s hunting regulations and bag limits are set by the Alaska Board of Game based on recommendations from Alaska Department of Fish and Game biologists, management plans, public input, as well as local and regional Advisory Committees, on which elected members serve to represent local interests and user groups when it comes to protecting and managing resources.

Many federal lands are also governed by a Federal Subsistence Board, which sets a separate set of regulations, and receive input from Subsistence Advisory Council’s. This federal board does have the power to regulate or even close hunting on federal public lands—even if the state wants to keep it open.

This latest Special Action Request comes from the Northwest Arctic Subsistence Advisory Council, which represents mostly subsistence user groups from communities scattered through Northwest Alaska, including Kotzebue, Buckland, Kivalina, Kiana, and Ambler—all of whom subsist off the Western Arctic Herd, the largest in-state caribou herd in Alaska. As it should be in a place with historical and contemporary subsistence use, the people who depend on the resource take first priority of a harvestable surplus. And historically, the region has supported ample opportunities for non-local and non-resident hunters to hunt caribou, too. The natural reaction to this most recent proposal to exclude non-locals is to wonder: What’s happening to the herd, and how is non-local harvest affecting it?

The Western Arctic Herd is such a vital resource that it has its own working group and management plan, which are coordinated at a multi-agency level. The group includes a wide variety of stakeholders and members with vested interest in the well-being of the herd. One thing that is clear about caribou herds in general is that their populations tend to oscillate dramatically. The WAH management plan states that, “Since approximately 1850, the WAH has displayed quite large and rapid changes in population size.” So population fluctuations are nothing new.

Even so, the working group says the herd is in a conservative decline as of 2020, with a harvestable surplus of 10,000 to 14,000 animals. The only reason the herd isn’t considered “liberal stable” is because the annual cow survival rate is 78 percent, which is just two percent below “stable.”

Adult cow mortality is often noted as one of the largest contributing factors in herd declines, and collaring is one way that agencies track cow mortality. According to the ADFG office in Kotzebue, that low survival rate of 78 percent could be due to some cows already being older when they are collared, and might not reflect cow survival of the entire herd.

According to this information, and the correlating management goals listed in the management plan, the herd does not appear to be in any sort of unnatural or alarming decline. As long as the herd remains above the threshold of 200,000 animals, says the Kotzebue office located in Unit 23, dramatic harvest reduction measures are not recommended.

So what about the impacts hunters have on the herd? What of the various hunters who depend on the caribou? The management plan for the WAH has the following to say regarding human use:

About 40 subsistence-based communities in northwest Alaska, whose heritage and traditions have been shaped by the availability and abundance of these caribou, utilize the herd. Since 2000, an estimated 10,000–15,000 caribou are harvested from the herd each year by subsistence users in communities within the range of the herd. The Western Arctic Caribou Herd is also important to hunters from other areas of Alaska and from outside the state. Until recently, nonresident and nonlocal hunters harvested about 500–800 additional animals from the herd; this number has declined to about 250 animals per year since 2016 due to various factors, including closures of some federal public lands to caribou hunting by non-federally qualified users. In some areas, such as the Kobuk, Noatak and Squirrel River drainages, there has been continuing conflict between local and nonlocal hunters that has spanned several decades. The herd’s range falls under the jurisdiction of many land owners and management entities, which complicates the harvest regulations.

This means that, including the years before 2016, non-qualified users (both Alaska residents and non-residents) only contributed to approximately 2 to 7 percent of the harvest since the year 2000, and only around 2 to 3 percent of the harvest since 2016. Yet current state regulations still offer bag limits of five caribou per day for residents, with no-closed-season on bulls, and an 8.5-month cow season for Alaska residents. According to that same newsletter, the Federal Subsistence board also instituted a year-round season for bulls and allowed the taking of calves in 2020.

The point? The harvest by non-local hunters is very small, and these regulations don’t scream population crisis. The management plan states that before 2016, large-magnitude harvest opportunity reduction hadn’t even been discussed in 30 years.

Many folks believe that the crux of this issue isn’t a population issue, but a real or perceived user conflict. In many parts of rural Alaska there has been tension and conflict between local user groups and non-locals, whether it’s other Alaska residents, or guides and outfitters. And as mentioned in the management plan, this conflict has spanned decades.

There is sometimes a very real sentiment in favor of keeping non-locals out, which is something that every rural hunter in Alaska or the Lower 48 likely has felt at one point or another. In fact, many regulations in remote areas of Alaska are already prohibitively restrictive to non-locals. I think that most of us hunters who live “in town” admire and sometimes envy a subsistence lifestyle, which we generally agree is something that should absolutely be preserved in rural Alaska. The state’s caribou are a treasure—an age-old life-giving resource in a harsh land.

When the timing makes sense, we should choose to not hunt caribou to protect that legacy. But we also need to be making those decisions soundly, and the impact that the small percent of harvests by non-locals could have on the caribou herd pales in comparison to the impact of closing federal hunting opportunities in 23 and 26A for non-subsistence hunters. It would hurt the guides, outfitters, air-taxi operators, and hunters who have dreamed of hunting Alaska, as well as the folks who are often recipients of meat donated by traveling hunters. Many hunters who don’t live in these areas and may not even plan on hunting there themselves still contribute to the management of the WAH herd through license and tag sales in Alaska, in addition to paying federal taxes and contributing to federal funds. They ought to be allowed to hunt there if the population can meet the subsistence needs and non-local demands.

Moose hunting has already been restricted to residents only in these areas, while “qualified users” enjoy liberal seasons. Despite opportunity for residents to travel and hunt caribou at other times of the year, the closure dates are specifically chosen to coincide with the non-resident season opening for bull caribou, and the time of year when most non-locals are likely to travel to hunt moose and caribou.

As a U.S. citizen, you can call in and voice your opinion. And you should, if you think all hunters should all be able to hunt on this public land. Here are the details: