The pair of large female pythons they found were tending their nests, which held nearly 100 eggs and more than a dozen recently hatched snakes 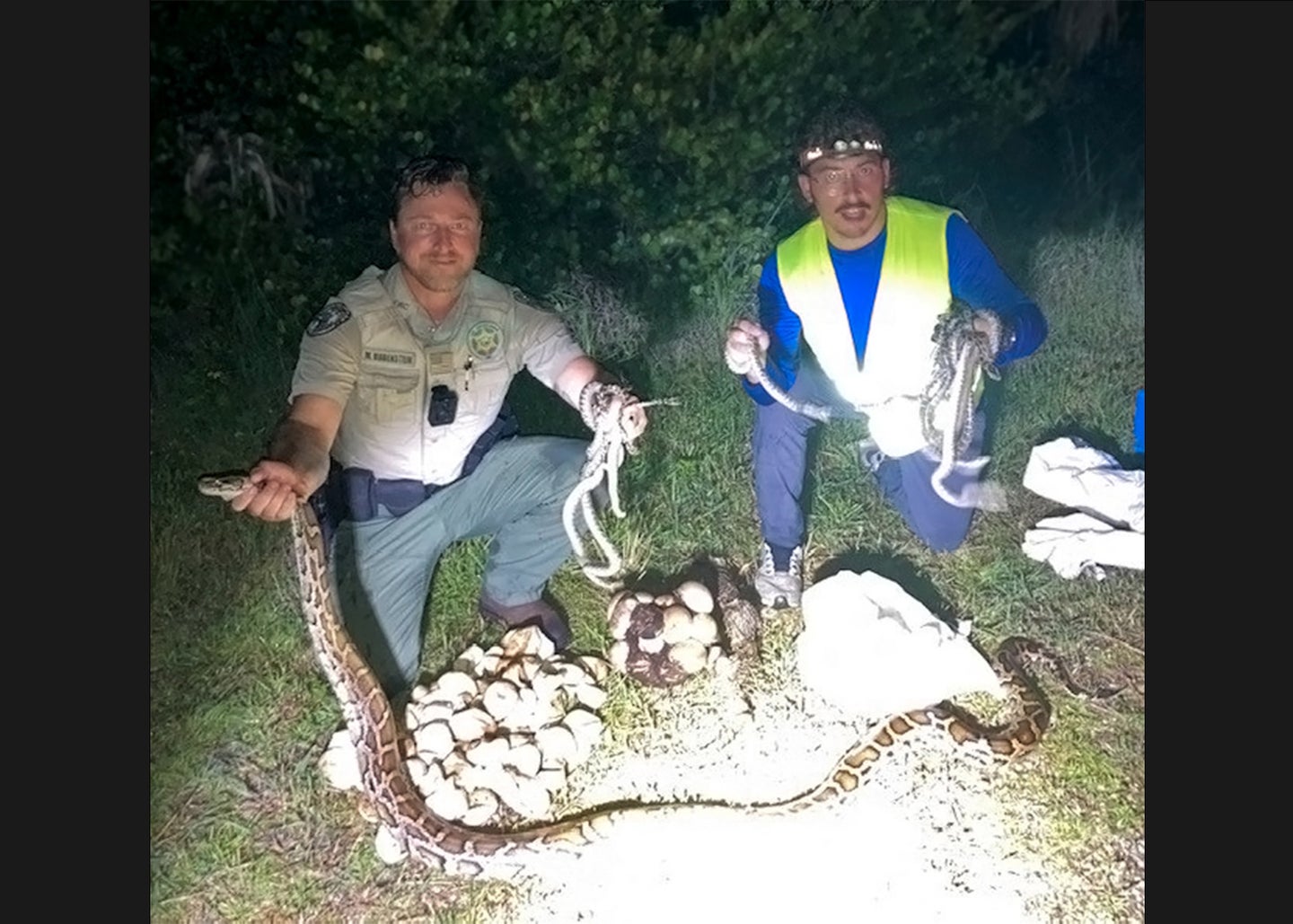 A local snake hunter and a wildlife officer with the Florida Fish and Wildlife Conservation Commission hit the Burmese python jackpot earlier this week in Big Cypress National Preserve. They came across two massive female pythons that were tending their nests, which held a total of 74 newly hatched eggs, 23 unhatched eggs, and 18 hatchlings.

According to a press release from FWC, conservation officer Matthew Rubenstein was patrolling the Preserve on July 11 when he ran into Alex McDuffie, who works as a licensed python removal contractor for the South Florida Water Management District. McDuffie was in the process of bagging a recently hatched Burmese python (also known as a hatchling.)

The two men started scouring the area for other hatchlings and they came across a 10-foot-long female Burmese python on her nest. The nest contained 23 unhatched eggs and 17 more hatchlings, according to FWC.

McDuffie then returned to the same location the following evening, where he found an even bigger female python that stretched over 17 feet long. The big snake was also tending a nest that held evidence of 74 recently hatched eggs—which, unfortunately, means there is now a new batch baby pythons slithering through the wildlife preserve.

Bartoszek explained that the removal of big, breeder females is crucial in their efforts to tamp down on Burmese python populations in southwest Florida because they lay an average of 45 eggs each year. Bigger snakes can lay at least twice that many, and the record-sized female they removed in December had 122 eggs inside her.

The concerted effort to remove Burmese pythons from the region is ongoing, and last month, Gov. Ron DeSantis announced the Florida Python Challenge, which begins on August 5. By offering cash rewards for the biggest and most pythons removed, the competition incentivizes the public to hunt down the invasive snakes, which have no natural predators and are destroying the native ecosystem.

Current estimates suggest there are anywhere from 30 thousand to 300 thousand pythons in South Florida. A report by the United States Geological Survey recently indicated that these invasive reptiles have led to a 90% decline in several mammal species in the region, including raccoons and opossums. Bartoszek and other wildlife biologists have also seen evidence that the snakes are preying on larger mammals, including full-grown whitetail deer.

“It’s not just rabbits and mice they’re eating,” he explained. “They might start off that way, but early on they become big-game hunters. And that’s why we’re here talking about snakes. It’s the impact across the food web in the greater Everglades. There’s cascading effects occurring in real time. They’re not after us, but they’re after our wildlife. And we’re after them.”