This is a high-tech game gun with competition roots. But will its sporting DNA resonate with American wingshooters? 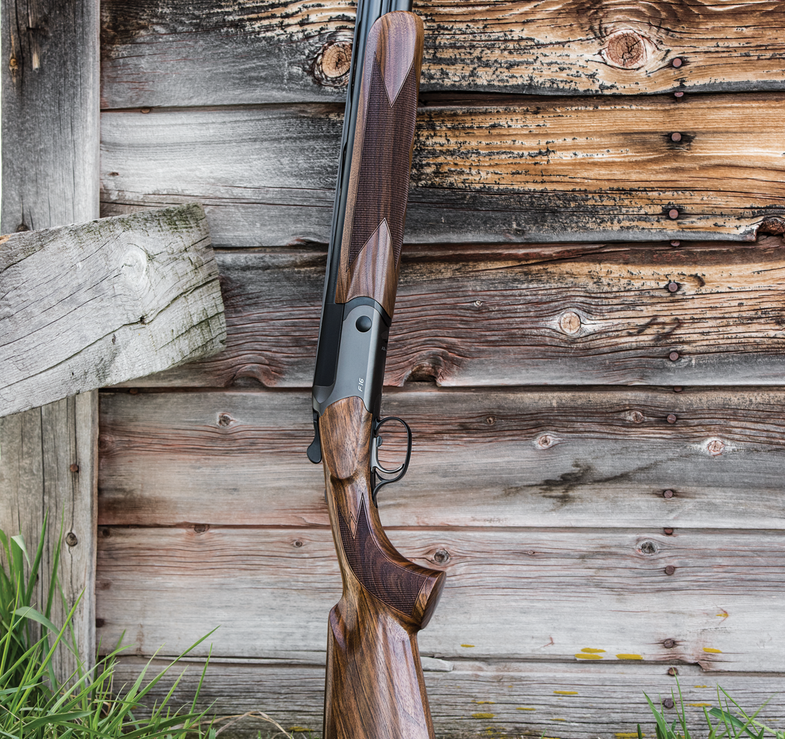 The lines on the F16 Game are clean and simple. Bill Buckley
SHARE

Yes, Blaser has named its new shotgun in accordance with the year of its introduction, but it wasn’t lost on the manufacturer that by calling it the F16, it would share a moniker with one of the most revered, sophisticated, and deadly aerial weapons of all time. This list of qualities is one that Blaser hopes the shooting public will associate with its F16, which is a technologically advanced firearm that is meant to appeal to shotgunners who aren’t afraid to pay extra for a high level of craftsmanship and design features.

To back up a little, the F16 is actually the younger brother of the F3, which is one of the most advanced (and expensive) competition clay busters on the market. Even though the F16 is a spendy little number, it is about half the price of the F3. The game model I tested here has a $3,795 price tag, while the sporting model, which has some additional features, costs $4,195. Like the F3, the F16 is built in Germany. Currently the F16 is offered only in 12 gauge, though a 20 is in the works.

I’m confident that the sporting model will do well. The F3 is highly regarded, and the F16 gives the shooter about 95 percent of the flagship model’s performance. (The main difference is that you can’t swap in barrels of different gauges.) Serious sporting clays shooters will recognize the F16 as a relative bargain.

I think the F16 Game is going to be a tougher sell, since Blaser is basically a newcomer to the wingshooting market.

The game model brings a lot to the party, however. I’ve had a chance to shoot it while hunting upland birds and waterfowl and on sporting clays.

From the standpoint of feel, the F16 is at the top of the class and compares well with the nicest over/unders offered by Beretta, Browning, Winchester, and others.

My gun had 30-inch barrels, though it comes with 28-inch tubes too. I like that extra bit of weight out front. I feel it helps smooth out the swing on birds boiling out of cover and improves my ability to connect.

My sample weighed 7 pounds 3 ounces, which is a bit heavier than a traditional game gun and is probably more than some hunters will want to haul around during a day-long jaunt across the uplands. But the weight is in the right places, and I found the F16 to be quick as a jackrabbit when I went to mount it during covey rises.

The geometry of the stock is smartly executed. The grip has a nice radius to it that puts the shooting hand in a good position relative to the trigger, allowing the index finger to bear evenly against the face of the trigger. This doesn’t happen by accident. The shooting hand is positioned somewhat vertically, another feature that can be attributed to the F16’s competition DNA. This isn’t traditional on bird guns, but more and more shotguns are being shaped this way.

The trigger on the F16 is outstanding. It is a mechanical trigger with an “inertial block system,” which is engineering jargon that means the gun won’t double on the shooter under recoil. Doubling happens when the shooter lets go of the trigger as the gun recoils and then squeezes it again, without ever realizing he or she lost contact with the trigger in the first place. The inertia block momentarily prevents the trigger from operating, making a double less likely.

The trigger broke at just under 4 pounds, with a crisp, positive feel. Triggers like this should be mandatory on all shotguns.

The other mechanical elements of the F16 also work with satisfying Teutonic precision. The ejectors are strong and apply even force to both shells. The tang-mounted safety has a low profile and is intuitive to operate. The action opens and shuts as solidly as a bank vault. The barrel selector is located within the trigger guard and toggles from one side to the next, depending on which barrel you want to fire first.

The quality of the barrels is excellent. They are smooth and blemish-free, have long, flat forcing cones, and are overbored to .735 inch—features known to improve patterning and reduce felt recoil. The F16 comes with three flush-mounted chokes, rated for ¼, ½, and ¾ constriction.

Aesthetically, the F16 has a handsome, purposeful demeanor. The walnut on mine was rich and lustrous, and the bluing on the barrels contrasts well with the gray PVD coating on the receiver.

The F16 makes a conscious departure from the gloss and scrollwork engraving typical on upland guns; we’ll have to see whether folks will cotton to its more austere mien.

The action is beveled at the base, giving it a semi-rounded profile. This makes the F16 quite pleasant to carry while hunting and enhances the gun’s looks. The checkering on the gun is simple and pleasing as well. And in keeping with the gun’s level of craftsmanship, the plain, rounded black butt pad was perfectly affixed to the stock.