SOS: How to Survive is coming to the Weather Channel 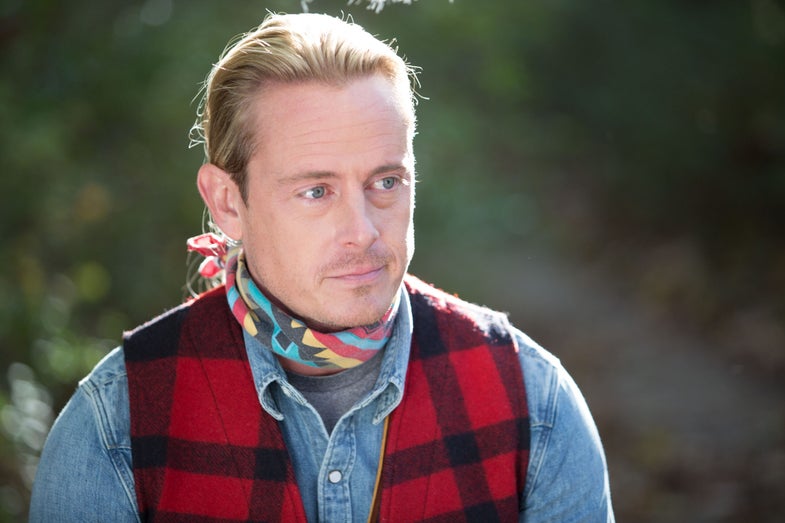 There’s a new survival show premiering this weekend on the Weather Channel, and I was lucky enough to sit down for a Q&A with the show’s host: survival expert Creek Stewart.

You may know Creek from his popular survival program, “Fat Guys In The Woods,” and I’m eager to check out his new show. This time around, Creek and a team of experts look at real life survival stories and present us with the skills and choices to make it out alive. “SOS: How to Survive” premieres Sunday, August 20 at 8 p.m. ET.

TM: I loved your show, Fat Guys In The Woods. It was clever, funny and often touching. How is your new show different from your last? CREEK: Well… the new show is clever and touching, but rarely, if ever, funny. It’s different in many ways, but the biggest is that we analyze and study past survival situations that actually happened to real people, ripped from the headlines. We go to where those stories took place, interview those involved and find the teaching moments in those incredibly gripping narratives, and sometimes-fantastical circumstances. I, along with many other experts in their fields (psychology, first aid, botany, etc.), try to learn from not only what these people did do, but also from what they didn’t. Hindsight is always 20/20, but the result is a unique perspective that provides life-saving information that could absolutely save a viewer’s life should they find themselves in a similar scenario.

TM: In the stories you’ll present this season, what do these survivors have in common? Is it a survivor’s mindset, some level of skill or response, or just rank luck? CS: I’ll start with the mistakes. So many of the stories we studied have these two mistakes in common: One, they did not tell at least three people where they were going and when to expect them back, and, two, they kept moving (attempting to walk/drive themselves out of a situation) when the better decision would have been to stop and wait for rescue. Although not everyone in the stories we studied made it out alive, the survivors do have one main thing in common. That thing is the sheer will to survive. I’ve always believed that survival is as much mental as it is physical and after studying these stories in such detail, I know that to be true without a shadow of a doubt. At some point in each of these tragic stories, the survivors made the decision ‘not to die’ and I believe they are still here today because of something very psychological. The psychology of survival is often a facet that is overlooked in survival instruction and the study of survival. An interesting aspect of the show is that I bring a psychologist, Jada Jackson, into the field with me to help me understand the mental side of these stories. It is absolutely fascinating.

TM: We know that surviving on a snowy mountain is very different from surviving in a scorching desert, but what are the top five pieces of survival gear that people should carry on every trip into the outdoors? CS: I wish I could say something here that no one has ever heard before—something new and engaging, but the basics are never really that exciting. Everyone should:

1. Be properly dressed for every facet of the weather (both day and night, as well as potential area specific weather events such as storms) of the environment in which they are submerging themselves in.

2. Carry enough water to get them through three times longer (within reason) than they are planning, some of which is ideally contained in a metal canteen.

3. Carry a small, light-weight water filter such as a Lifestraw or Sawyer Mini for drinking wild water.

**5. Carry a lightweight tarp and 50 feet of paracord for improvised sheltering (although a tarp has many more functions as well). I will say, if your budget is not an issue, substitute a GPS emergency beacon device such as SPOT for any of the above five items to immediately alert authorities if something is wrong.

TM: What kind of disasters should people be prepared to face, and how should they prepare? CS: Okay, here’s the very short answer…There are two categories primarily: 1) People should be prepared for natural weather related disasters that are prone to their specific local environments. 2) People should be prepared to deal with sudden and unexpected survival scenarios that may happen while in the outdoors or traveling (e.g. lost on a hike, injured while hunting, trapped in your car on a snowy road). They should prepare for both very similarly: by having the tools and resources on hand, whether that be at home, in a car or on their person, to provide themselves with Shelter, Water, Fire and Food. While the tools for these vary greatly from preparing for a disaster at home versus readying oneself for a day hike, the end goal is the same. Everyone must regulate core body temperature, stay hydrated, and eventually eat food in order to survive. Fire can help facilitate all three of those.

TM: To a lot of people, you’ve made it. You’re living the dream. You’ve been a successful author, a well-known survival instructor, and even a television personality. So what’s next for Creek Stewart? CS: First, thank you. I am humbled by anyone who thinks that. Second, let me state that it has taken two decades for me to reach all three of those accolades. I am far from an overnight success and far from what I define as successful. I self-published my first survival manual when I was 21 and taught my first 2-hour course that same year. That was 20 years ago. I continued to train and teach in survival skills part-time, with very little financial reward, for many years while working other full and part-time jobs. I’ve always said that you’ve probably found your life’s passion when you’d do it and not get paid. That’s how I’ve always felt about teaching survival skills and lived that way for more years than most could ever stomach. What’s next? I’m going to continue pushing forward with my life’s mission as I have from the very beginning: To teach life-saving survival skills to as many people as possible. And, I’ll do it through as many avenues as I possibly can.

*Find out more about the show here. And for more information about Stewart, check out his site here.