The 10 Best Stories of 2020, as Chosen by Our Loud-Mouthed Hunting Buddy

A lifelong fan on the greatest (and worst) hunting, fishing, and shooting articles of the year 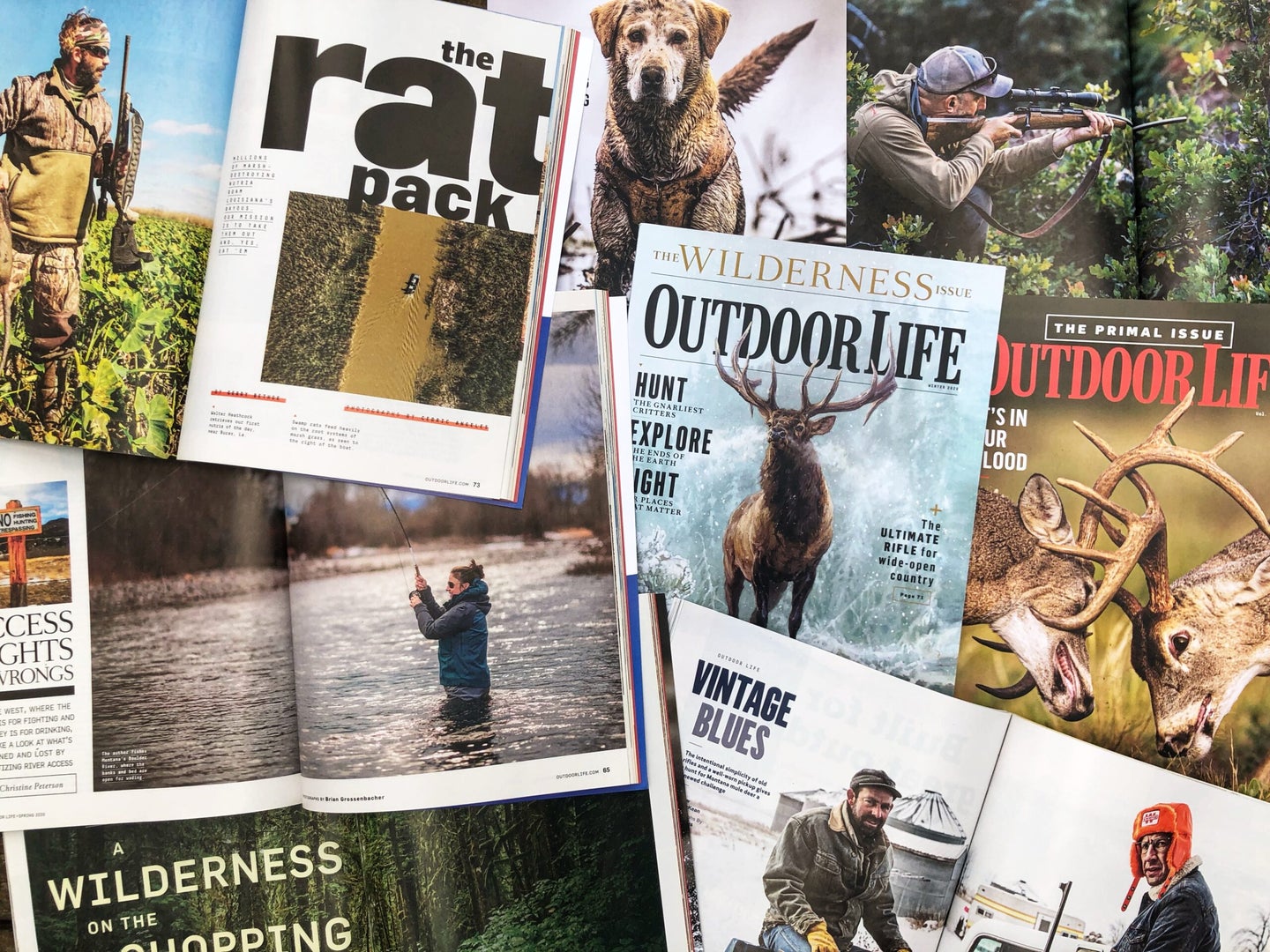 The editors could have rounded up our favorite stories of the year, but that would be like telling everyone how perfect and charming your own children are. So, in the spirit of cutting through the B.S. of an already hard-to-swallow year, we asked the most irreverent bastard we know to tell us what he really thought of our 2020 articles.

Danny Hinton is a bowtest team member, a diehard deer hunter, and a lifelong reader of Outdoor Life. He’s also a west-Kentucky redneck who calls it like he sees it and doesn’t care one lick what anyone else thinks. Hinton re-read more than 60 of our biggest stories this year, then cracked a bottle of whiskey and called me up to explain which ones were worth his time.

So, here are Hinton’s favorite picks, plus some dishonorable mentions. The stories are numbered for easy reading, but they’re not ranked in any particular order. This interview has been condensed and edited for (egregious) profanity. —Natalie Krebs

This was back to basics. Now, I’m not Midwestern, but back in the 1980s and ’90s when B.O. was acceptable, you’d put on your long johns from Walmart, maybe a pair of sweatpants, and shove yourself into these thin coveralls. And here I am sitting in $2,000 worth of Sitka Gear, not counting all the other tech I’m using to hunt the same deer my grandfather did in just a pair of jeans and an Army surplus jacket. This story shows how absolutely over-difficult we make easy things. In a year that’s really skewed everything, it’s about the simplicity of the actual deer hunt, and the little amount of gear you really need. It was good for me to remember that. Read the story here.

We take a look at what’s gained and lost by privatizing river access, by Christine Peterson

Of course, most people in the East don’t understand a lot about Western access rights, but damn, everybody better get familiar with it after getting their shit taken away this year. This year makes access, and the stuff that’s down as law, a little more important to me than it normally is. It’s kind of spooky that you can get shot at while trying to fish for some little trout you’re going to coddle and throw back in the water. Read the story here.

This is one of the down-home stories. My grandfather had every Outdoor Life and Field and Stream, and those old issues talked about shotguns, and tradition, and stuff that’s almost been lost to the 21st Century. And the author used his old family gun to actually get back into the outdoors. Now, the dog hunting thing is beyond me—I don’t have the patience for it. But I get this guy. And the story just caught my eye as something that makes sense. Read the story here.

4. Every Hunter Should Know What the Lacey Act Is, How It Works, and Why It’s On the Books

Hunting celebrities Josh and Sarah Bowmar have been charged with Lacey Act violations. Their lawyer is planning to challenge the legality of the act. Here’s why that matters for all hunters, by Joe Genzel

The Lacey Act is a sneaky little bastard. The way it’s applied today is not even something I would consider in line with what the actual Lacey Act was first meant to do. But this has been around for so long that no one hears about it until wham bam, they get pinned for bringing the wrong piece of an antelope home. This needs to be revamped, and hunters need to be aware of it. Read the story here.

5. Rules of the Wild

I get this story because, well, screw it. Let me tell you a story.

Back in 1993, when my grandfather was still alive, they had given us two days of antlerless hunting in our county at the end of the short season. At the time it was unheard of, so I took a Monday off from my college classes and got in the stand early. I put on my old stuff that froze me to the bone, and went out and shot a button buck. I had to trail him, and I ended up where my granddad hunted. He never told me I could hunt there, but I went to that spot while following the blood trail. I lost the trail and was standing on this creek bank when I looked up and saw a 10-point. He ended up being almost 125 inches, which was ridiculous for Calloway County in 1993. I shot him with my grandfather’s old .30/30. When I watched him fall, I saw the button buck right by him, still on his feet, and I shot him, too. Later I drove my grandmother, who had this big beehive haircut, down to the bank to show her where the deer were so my grandfather could help me drag them out.

She said (and I’ll never forget this), “Oh Dan. That’s the deer Poppa’s been hunting.”

And that’s why he hadn’t told me about that spot. He was proud of me, and that I accomplished it. But to the day he died, that was the only deer that man wouldn’t help me process. It was almost like his right of refusal had been dismissed. There are a whole lot of memories to be made in one spot. There’s also a sacred part of hunting that a lot of people forget about that has nothing to do with the killing, the cleaning, or the packing. There’s something about being able to say, “I’ll never be back without you. I’ll never tell anybody.” It’s giving your word, which is almost garbage this day in society. Read the story here.

6. The 6.5 Creedmoor Is Not the Ultimate Super Cartridge

Many hunters hold the 6.5 in high regard, but there are plenty of cartridges that outshoot the Creedmoor, by Ron Spomer

Thank God someone said it. I believe the 6.5 Creedmoor is the best ever marketed cartridge. You take a cartridge that was so similar to the .260 Remington and the 6.5×55 Swede and the .25/06, that were around since my granddad, and re-market it—in what all Western hunters are amazed by, which is the metric system—and holy crap, it’s genius. I’ve got one. My buddy’s got one. He’s five clicks from a man bun now, but he’s got one. It’s a great cartridge with many capabilities, but to actually explain, using numbers, why it’s not the end-all-be-all cartridge was something a lot of hunters needed to hear. Read the story here.

I’ve had the opportunity to interview some of the best deer hunters in the country, and they’ve shared mountains of knowledge with me. But I learned the most important lessons at the family deer camp as a kid, by Alex Robinson

I don’t think this story has as much to do with the woods as it’s about how life moves fast and you never get a redo, so you better enjoy it. It’s scary that things are going to change. You don’t want them to, but they do. Holy hell, if I could spend one more deer season with my grandfather, I don’t know what I’d pay. I’d pay everything. Now, I don’t know how it would go because he was Church of Christ and hates whiskey, but still. I’d pay. Read the story here.

8. What It Feels Like to Miss the Biggest Buck of Your Life, at 45 Yards

When buck fever spirals into a complete meltdown, it might be time to call it quits, by Natalie Krebs

This story reminded me about what it was like to lose that excitement for deer hunting, and what it meant to get it back. Because if you lose it, hunting becomes work. When I lost that feeling for a few years, I quit hunting. I would draw back, shoot one, and never get that shake. I didn’t have to sit back down and compose myself because I was afraid I would fall out of the stand anymore. Losing that shake was one of the worst feelings I’ve ever had, and I’ve been divorced. Finally after a few years, I felt the need to go hunt. The first doe walked out and I pulled the trigger. Even though it was with a gun, I thought, Hoo, there it is. It was like a shot of whiskey, with the kick at the end. Everybody needs a break from everything. But when I killed that doe, I thought, Oh thank God this shit is back. Read the story here.

This ultra-runner is on a quest to persistence-hunt a pronghorn, but chasing down an antelope on the open prairie is about a lot more than just winning the race, by Christine Peterson

I’d pay money to watch this guy run after an antelope all day. But seriously, if he wants to do this, do it. I can’t run 40 yards—I’d break my leg in the first hole. I read it and thought, Are you shitting me? Give it hell, homeboy. I like that there are still people doing what they want to do. They think, I want to try this, and they don’t give up. And, as a side-note, the reaction on social media to this story is why I have limited myself to one hour of Instagram and one hour of Facebook a day. It keeps my blood pressure down and my drinking to a minimum. Read the story here.

Millions of marsh-destroying nutria roam Louisiana’s bayous. Our mission is to take them out and, yes, eat ’em, by Gerry Bethge

I’m not sure about the dude standing on the front of the boat like he’s George Washington, but I swear I could shoot the shit with these guys. Of all the come-along-adventure features of the year, this was the only one I could afford. Those nutria need to go, and hell, $6 a tail is pretty good, too. Read the story here.

“When the guy has more in his gun than I have in my bank account to go on a Western hunt, we’ve already started off on the wrong foot. Plus, all that crap about $25,000 to kill a certain bull? We’re talking about public land. That’s what bums me out about hunting. I put in for a bunch of Western states every year, and it’s an absolute mess. Every year it’s, ‘Thanks for the dollars, kiss my ass, pay again next year.’”

“Oh let me just go pick up my falcon and hunt some desert quail. I did like the little bird hats, though.”

3. Deer Hunting Every Day in the Suburbs of Virginia

“Do you know how many guys texted me after this story, asking if I’d heard about tree saddles? Bitch, look up 1985.”

4. All our coronavirus coverage

“Anything about coronavirus sucks.”